A history of well-being

Human well-being is widely viewed as a multidimensional phenomenon of which income is only one facet. Human development defined as “a process of enlarging people’s choices” (UNDP 1990, p. 10), namely, enjoying a healthy life, acquiring knowledge and achieving a decent standard of living provides a long-run view of human well-being.

As a comprehensive perspective of human development on a global scale and over time is lacking, a long-run view that stresses the health and knowledge dimensions of wellbeing is the main goal of a new historical database.

The Historical Index of Human Development (HIHD) covers up to 157 countries from the mid-19thcentury – before large-scale improvements in health helped by the diffusion of the germ theory of disease (Preston 1975, Riley 2001) and in primary education (Benavot and Riddle 1988) began – to 2007, the eve of the Great Recession (Prados de la Escosura 2016) 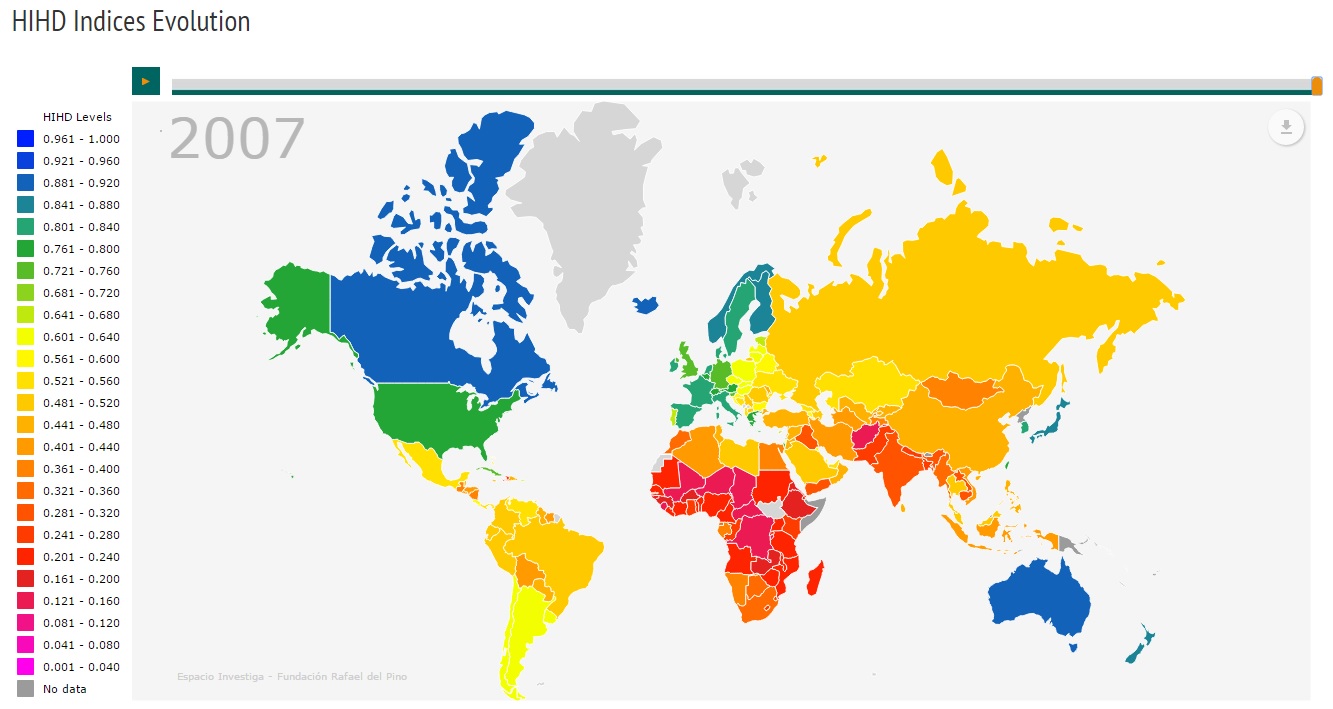 View the interactive version of this map here.

Some findings on gains in human development

Substantial gains in world human development are observed since the mid-19th century and especially over the period 1913-1970.

A major advance across the board took place between 1920 and 1950 just at the time of an economic globalisation backlash, which resulted from substantial gains in longevity and education. Thus, while real GDP per head stagnated or even declined as world commodity and factor markets disintegrated, health and education practices became increasingly globalised, resulting in a major advance in human development.

Although the gap between the OECD and the Rest widened in absolute terms, an incomplete catching up took place across the board between 1913 and 1970. Since 1970, the variance in theRest’s performance has been large. Asia, driven by China and India, and to lesser extent Latin America and North Africa managed to catch up, while Central and Eastern Europe (including Russia) and sub-Saharan Africa fell behind.

Social dimensions have driven human development gains across the board over the long run. Longevity accounts for the larger share during the first half of the 20th century. Exceptions are the virtual stagnation of life expectancy indices in Central and Eastern Europe as of the 1960s and in sub-Saharan Africa from the 1980s onwards. Access to knowledge had, instead, a leading role in the late 19th century and during the second half of the 20th century. Education, and to lesser extent life expectancy at birth, appears to lie behind the Periphery’s limited human development catching-up.

The only period in which substantial gains in longevity were achieved in the Rest was that of the epidemiological or first health transition – that is, the phase in which persistent gains in lower mortality and higher survival were achieved as infectious disease gave way to chronic disease (Riley 2005), which was experienced in developing regions from 1920 to the 1960s.

At the turn of 20th century, a second health transition started in the advanced countries, with mortality falling among the elderly due to respiratory and cardiovascular diseases being fought more efficiently and their better health and nutrition during childhood (Cutler et al. 2006). The absence from this second health transition helps to explain why the developing regions have fallen behind in terms of human development.

This largely explains their failure to catch up with the West despite the educational expansion and the recovery, at the turn of the 20th century, of per capita income growth.

Medical technological change – including the diffusion of the germ theory of disease (1880s), new vaccines (1890s), sulpha drugs to cure infectious diseases (late 1930s) and antibiotics (1950s) – has been a main force behind the major advancement in longevity and quality of life. Economic growth also contributed to expanding longevity through nutrition improvements that strengthened the immune system and reduced morbidity (Fogel 2004), and public provision of health.

It is worth noting the role public policies played in the improvement of health and education throughout the 20th century that translated into long-run gains in human development in both developed and developing countries. In developing regions, however, health advances often did not result from widespread treatment of infectious diseases with sulpha drugs and antibiotics largely inaccessible to its low-income population, but were achieved through low-cost public health measures and the diffusion of hygienic practices, often during periods of economic stagnation (Riley 2001).

Antimicrobial resistance is when infection-causing microbes evolve to become resistant to the drug designed to kill them, a threat accelerating faster than previous worst-case scenarios.

‘Do what you love’ could be contributing to the Great Resignation