Are poorer pupils doomed to fail?

Results from international education assessments show how extensive differences exist in student achievement across countries, regions and even schools. How do socio-economic factors influence learning outcomes? Do students from rich families have more educational opportunities and fare better? If so, can we expect uniform results in learning achievement?

Income inequality is high and rising in many developed and developing countries, affecting the economic, social and political spheres. But perhaps none is more worrying than the possibility that a low family income leads to educational and economic limitations for the next generation. In order to even out the playing field, sound public policy is needed to reach the most disadvantaged and vulnerable groups, providing them with equal opportunities.

The interaction between families, labour markets and public policy defines the opportunities that each child faces. Preferences, ambitions and capabilities are created by a child’s environment. While some parents read to their children every night, others do not, creating differences and opportunities early in life. Schools have the same transformative role.

The most effective social policy is education. Education enhances the development of skills and abilities. When an education system produces different results, a social structure of unequal opportunities is created.

Keep it in the family

A first step towards reducing inequality is to understand its origins. John Rawls perceives equality of opportunity as influenced by individual talents and efforts. Talent and skills should precede opportunities; they cannot depend on them. For instance, if your family has a high income, you are likely to have a good education, which influences your skills and talent.

The origins of inequality are not so clear. It results from various factors interacting, since birth children are given different opportunities depending on parenting styles. Another factor influencing inequality is merit: the idea that children should work hard towards an objective in the future. In reality, however, merit is influenced by past (rather than future) actions. Pre-existing factors such as family income and parenting styles will be transformed into opportunities or disadvantages in the labour market.

A third factor is individual goals. These choices are not always rational, correct or desirable from an economic viewpoint. And often, they are independent from opportunities, talents and abilities when decisions regarding schooling are taken.

The Great Gatsby Curve is a chart that illustrates how much people earn compared with their parents. The x axis of the graph represents income equality. A high value shows a concentration of wealth in a few families. The y axis represents inter-generational “elasticity”. The higher the value on the y axis, the greater the correlation between the father’s and child’s income. A coefficient close to zero in the inter-generational income elasticity signifies no relationship. This means that the situation between generations can be altered and a child can have a path different from the parents. In other words, the children of poor parents can be better off in the next generation. 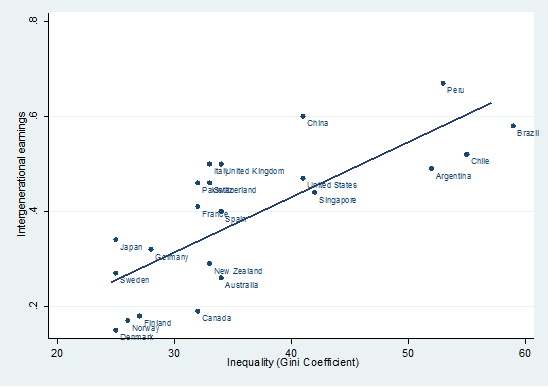 A high number on the y axis implies that high-income parents have rich children and low-income parents have poor children. This relationship predicts that in countries such as Denmark, Finland, Norway and Sweden, the income level of a child is affected by the parent’s socio-economic status less than 20% of the time.

While the relationship between the two factors is important, causality cannot be inferred. However, correlating the two factors, inequality and economic mobility between generations, is useful because it provides a starting point for discussion and understanding the potential underlying causes of economic inequality.

If income disparities in one generation are linked to inequality of opportunity in the next, then the socio-economic status of parents is a determinant of the child’s. The evidence is rather strong in supporting this theory, with studies showing that children not only preserve the socio-economic status but the same profession as their parents. The reasons are manifold: over life the child built that goal; parents help the child to find work within their network; the child is accustomed to his/her network relationships; and in other professions the relational capital is harder to acquire and too risky.

The way to equal opportunities?

Public policy should identify the windows of opportunity in people’s lives, exploit them and open the breadth of possibilities. For example, if speaking a language is a bottleneck that limits access to quality jobs, there are two possible solutions: provide more and better opportunities to learn the language or restructure the workplace so that the language is not a barrier.

The alternatives are not always available, however. And eliminating the requirement is not a strategy that makes sense. If the problem is racial discrimination, policy interventions are needed as changing race is not plausible.

Unequal educational opportunities are reflected in the labour market. Students from poor families will often strive to improve their educational credentials more than their peers from middle- and high-income families. They do so with difficulty and many of them drop out of school. They work in low-skilled jobs. Subsequently, adults in low-skilled jobs are more likely to report health problems, perceive themselves as objects instead of actors in the political process, and rely less on other members of society.

Due to a lack of knowledge, these families are unable to earn more or keep up in the labour market. They not only have less money to invest in their children’s future but less time to spend with them due to longer working hours, and less quality time due to the associated stress.

The only hope is sound policy-making. As Lyndon Johnson said in a speech on human rights in 1965: “You do not take a man who has been hampered by the chains for years, release and lead him to the start of a race, saying ‘you are free to compete with others’ and still justly believe that has been completely fair.”

Author: Silvia Montoya is Director of the UNESCO Institute for Statistics. Twitter: @montoya­_sil

Image: A student sits in line for gifts and food during a Christmas outreach programme for public school children in Manila December 19, 2007. REUTERS/Cheryl Ravelo