At what age does happiness peak?

If it’s no fun getting old, then why do surveys of national well-being show that older people are happier than younger people?

Recent research into happiness, questioning people about their lives as a whole, their jobs, family, social activities and other aspects, has started to reveal some intriguing patterns. New data released by the Office for National Statistics (ONS) shows that older people tend to be happier rather than more miserable than younger people. But looking at ONS data in more depth reveals an even more interesting pattern

Between the ages of around 20 and the decade between ages 40 to 50, people score progressively lower in measures of happiness on average. But after the middle years of their life, that trend is reversed so that average happiness becomes steadily greater, until it levels off when people are about 70. 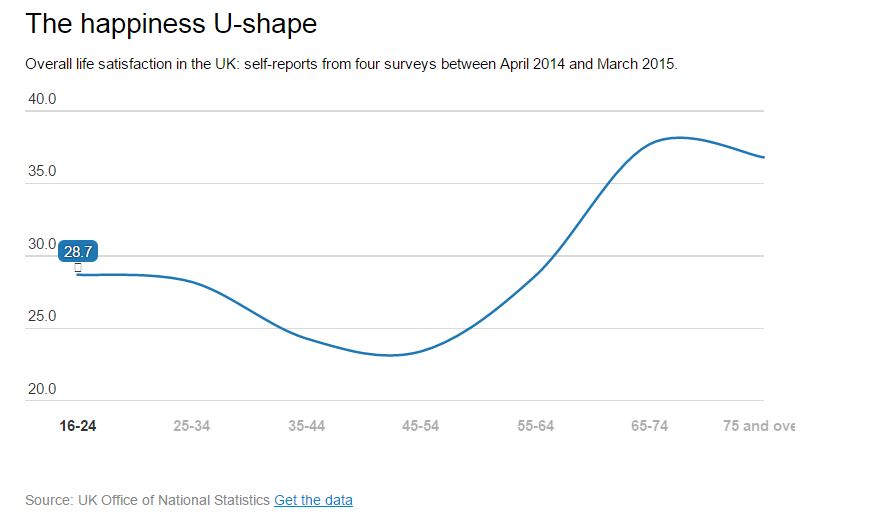 This age pattern in the UK parallels that found in other high-income countries, although in other regions the curve is not present in the same way. In high-income countries it is visible in broad assessments of life satisfaction and (with increases in the middle years) through reports about recent worry or stress. It also exists within particular domains of life: job satisfaction and job strain are respectively lowest and highest in the middle years of our lives. And the U-shape is broadly similar for men and women, although the diagram below illustrates that women tend to worry more than men.

Proportion of respondents who reported that they experienced a lot of worry yesterday, based on data in Gallup-Healthways Wellbeing Index Poll
Steptoe, Deaton and Stone, The Lancet

Surveys of this kind generate averages from different people, and we cannot assume that all people will travel along the average route. Longitudinal research into happiness over a life-span has not yet been possible, and research has not directly indicated that one variable – age – is causally determining the other – happiness.

It does seem likely that age contributes in some way to positive or negative feelings, but the number of years since birth cannot directly cause anything. So we need to look for other, possibly causative, factors which may change with age.

Happiness and the environment

Happiness is of course hugely influenced by external factors, and many investigations have identified several which may contribute to the relationship between happiness and age.

As adults move towards middle age they often take on additional job and family responsibilities and can be increasingly troubled by job insecurity and future career uncertainty, as well as by childcare and commitments to elderly relatives. Conflicts between roles can become unusually great in these years, and income can increasingly fail to meet people’s needs.

Studies have found that people need to have some influence on what happens to them and what they do to avoid distress. They are unhappy being merely a pawn manipulated by other people and events, and they want to be able to take steps to reduce strain and enhance their enjoyment of life.

But the opportunity to influence your surroundings can be substantially impaired in your middle years because of conflicting demands made by other people and the roles you have taken on. You can feel particularly hemmed in by your situation.

This, alongside other aspects of a person’s environment, can depress happiness in middle age. But why does it improve, on average, after then? In part, it is because people move on to different stages of life, when demands on their time and money, experienced uncertainty and other negative features tend to decline. As children grow up, job and other activities become established and care-dependent relatives pass away, people’s happiness on average increases.

But feelings are not entirely determined by what happens to you – they also depend on how you interpret your world. People respond differently to many aspects of the environment, in part through mental filters such as those illustrated below. 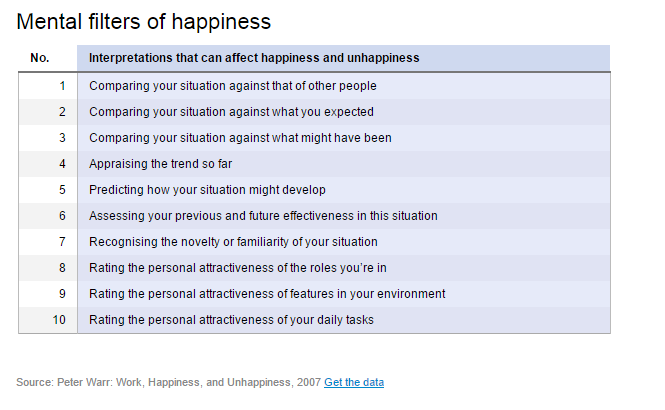 Looking at number three in the table, “upward” comparisons (against alternatives which are seen as better than your own situation) encourage unhappiness. Yet sometimes thinking about ways in which life could have turned out worse (making “downward” comparisons) can lead to more positive feelings.

Often mental comparisons involve other people, such as number one in the table. In our 20s “upward” comparisons with other people are common – keeping up with the Jones’s, or checking body shape against celebrities. But in later years reduced levels of striving can be accompanied by more “downward” comparisons. As people move beyond middle age they increasingly review their life so far, often finding “downward” alternatives which can improve their happiness.

Particularly important for understanding why happiness may increase in the later years are processes of mental adaptation. Biological and psychological studies have shown how responses to a stimulus become diminished after repeated presentation. This means that unpleasant conditions can become viewed less negatively after a period of time.

For stimuli that are new, cognition (what you think) and affect (how you feel) tend to be closely intertwined. But after a period of adaptation they may become uncoupled: you may be just as aware of what’s going on, but your feelings become more neutral. As features and events in your life become increasingly familiar they tend to generate less intense emotions, perhaps contributing to a gradual increase in happiness with increasing years.

Together, the combination of these two sets of factors – changes in what life doles out and shifts in the interpretation of those events – can provide some explanation of the U-shape pattern in happiness across ages.

Author: Peter Warr is an Emeritus Professor at the University of Sheffield.

This is how heatwaves affect your body - and your mind

Climate change is making heatwaves hotter and more unpredictable - and extreme heat can impact our mental as well as our physical health, research shows.

Children as young as 8 years old should be screened for anxiety, says US task force

The US Preventative Services Task Force has issued a statement recommending screening for anxiety in children and adolescents from the ages of 8 and 18.

This simple change can help to improve your mental health, says study

Green spaces can reduce the risk of dementia in middle-aged women. This is why