Religion holds women back. Or does it?

Religion is often seen as a barrier to gender parity. Stories abound of gender-based violence done in the name of religion. As a result, in many cases, the issues of religion and gender parity are often dismissed as too complicated to address. There appears to be no way to unwind this rather complex multi-institution. 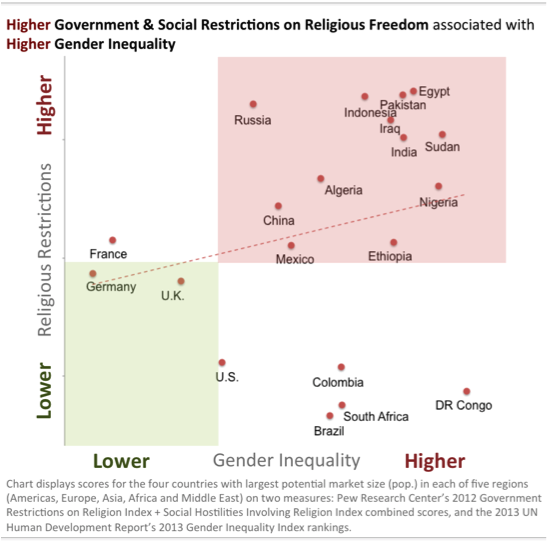 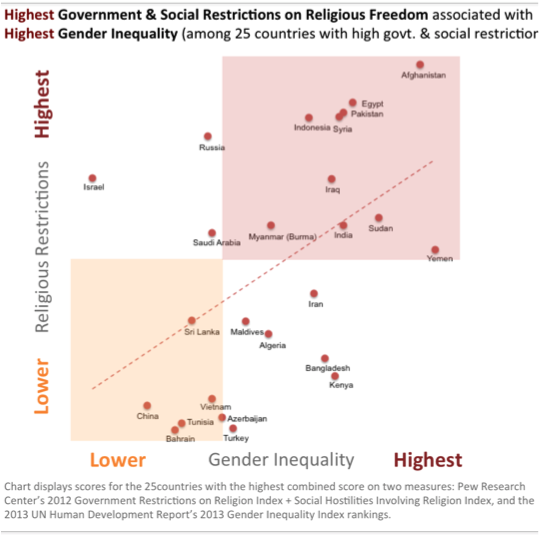 Religious minorities are especially vulnerable when the right to freedom of religion or belief, as recognized by the UN Declaration of Human Rights, is not protected. ISIS justifies its rampant disregard for life by citing ideological superiority. Hiding behind this claim, it carries out ethnic cleansing, killing Yazidi men and boys, calling the women and girls “pagans” and selling them into slavery if they refuse to convert.

According to a recent study by researchers from Georgetown University and Brigham Young University, any solutions will need to address issues such as religious freedom, because religious freedom is not only tied to gender equality but also to more stable economies. Religious intolerance affects women’s ability to engage in and contribute to the economy. The study gives clear linkages between religious freedom, economic stability and women’s empowerment.

The case of Amira Osman Hamed from Sudan is an example of government restrictions impeding growth. She was expected to stand trial for refusing to wear a hijab, a scarf worn by many Muslim women to cover their hair. Hamed was charged with violating a Sudanese law, that states: “Whoever does in a public place an indecent act or an act contrary to public morals or wears an obscene outfit or contrary to public morals or causing an annoyance to public feelings shall be punished with flogging which may not exceed forty lashes or with fine or with both.”

Sudan is one of an increasing number of countries where the government regulates the wearing of religious symbols or attire, such as head coverings for women or facial hair for men. The Pew Research Center’s latest report on global restrictions on religion finds that, as of 2011, 53 of the 198 countries included in the study (27%) have such restrictions, up from 21 countries (11%) in 2007. 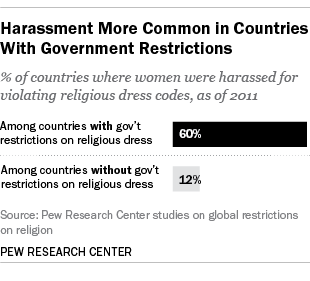 In addition to government regulations, in many countries private individuals and groups also try to enforce norms related to religious attire. The Pew study finds that the number of countries in which women have been harassed by individuals or groups for violating religious dress codes has increased in recent years. In the latest year studied, such social hostilities over religious attire were found in 50 countries (25%), including Sudan. Five years earlier, such incidents were reported in just 14 countries (7%).

While there may not be a direct causal connection between government regulations and social hostilities involving religious attire, the data shows that harassment of women over religious dress occurs more often in countries where the wearing of religious symbols and attire are regulated by any level of government.

To close the gender gap, strengthen economies and empower women, it is imperative that religious freedom become a factor that is taken seriously and acted upon.

The Global Gender Gap Report 2015 will be published on 19 November.

Authors: Brian Grim is the President of the Religious Freedom and Business Foundation; Jo-Ann Lyon is the General Superintendent at Wesleyan Church. They are members of the World Economic Forum’s Global Agenda Council on the Role of Faith.

Image: A girl reads the Koran at a Koranic school during the Muslim holy fasting month of Ramadan, in Benghazi, Libya July 5, 2015. REUTERS/Esam Omran Al-Fetori

More on Roles of Religion View all

Many religions celebrate Diwali. Here are the stories behind the festival

Diwali is celebrated by Hindus, Sikhs and Jains. The festival lasts five days and the story behind the festival differs for each of the three religions.

How followers of the world's religions have changed over time

The amount of people following specific faiths across the world is changing; Christianity will remain the largest religious group if current trends continue.