Social justice: a casualty of the financial crisis

Twenty-six million children and young people under 18 in the European Union today are at risk of poverty or social exclusion. Of the EU’s population as a whole, 24.6% are at risk: around 122 million people. As austerity continues to bite, governments have not made it a priority to mitigate the effects on those most at risk, and as a consequence, economic recovery is not bringing with it a commensurate improvement in opportunities for the EU’s most vulnerable citizens.

The Bertelsmann Stiftung’s new report, Social Justice in the EU – Index Report 2015, which annually assesses the development of social justice in the 28 EU countries, shows that the EU has a long way to go if it is to return to the levels of social justice seen before the crash – and so far, there are few indications that most EU states are prepared to do what it takes to turn the tide. 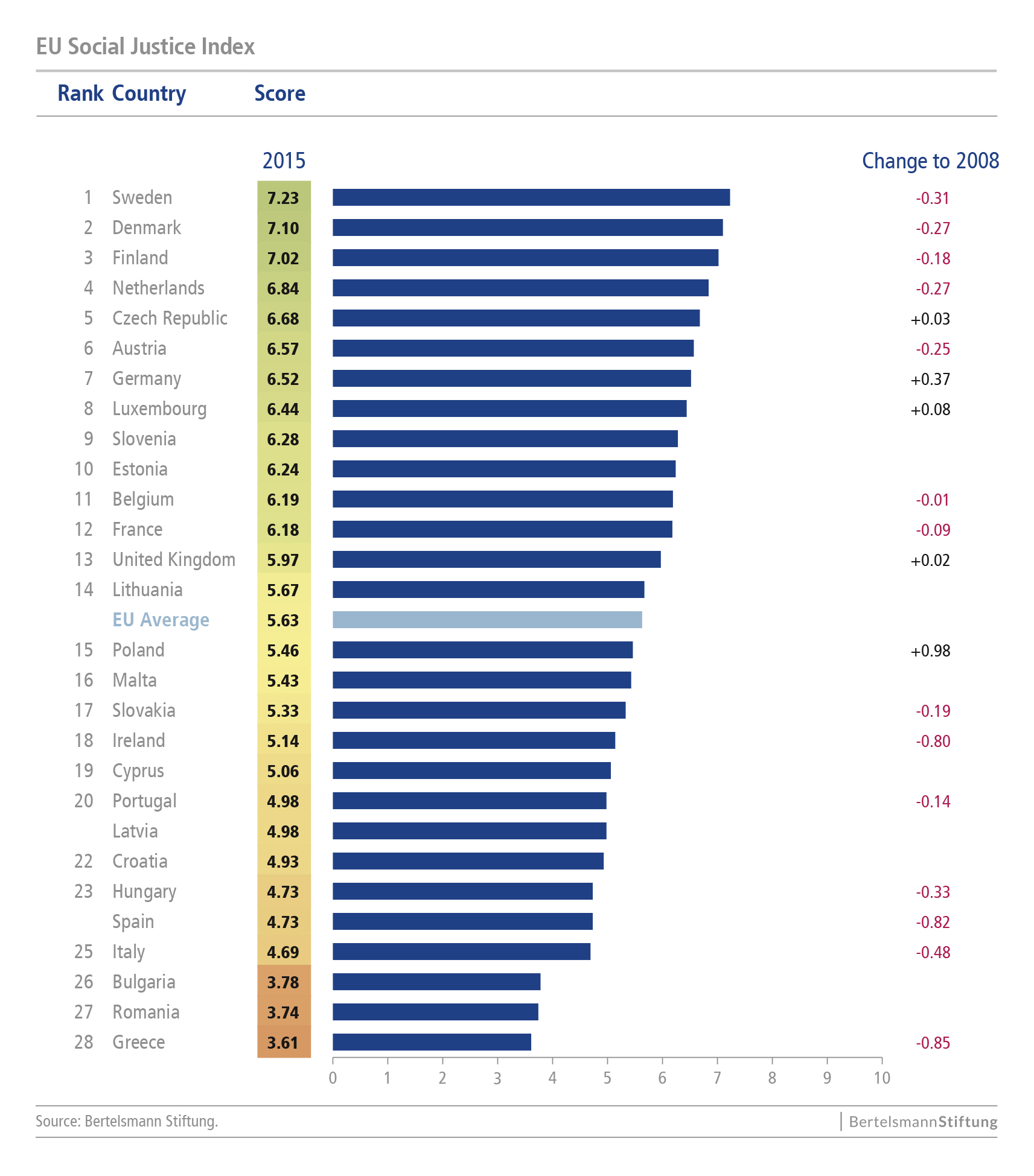 The social divide between northern and southern Europe is growing larger, as the crisis-hit states of the south continue to struggle. In Greece, 36% of the population is at risk of poverty or social exclusion; in Spain, 29.2%; and in Portugal, 27.5%. The latter two countries have seen their economic prospects brighten in recent years, but this improvement has not brought relief to those most vulnerable: in fact, the number of people under threat of poverty in both Spain and Portugal has risen since last year’s study.

But even the countries that top the Social Justice Index, Sweden, Denmark, Finland and the Netherlands, are performing worse on social justice than they did before the crash – indicating that comparative economic strength alone is not enough to ensure that all citizens have opportunities to thrive.

Sound social policy, and not simply the pursuit of growth, is the best tool to ensure social justice. Coming in at number five on the Social Justice Index, the Czech Republic is no economic powerhouse. As a country that relies on exports, decrease in demand abroad caused GDP to drop during the financial crisis, although growth has now returned – in the first quarter of 2015, the Czech Republic’s economy grew by 4.2%, the highest growth rate in the EU.

The Czech Republic is the best in the EU at poverty prevention: 14.6% of the country’s population are at risk of poverty or social exclusion, as compared to the EU average of 24.6%. Of children and young people under 18, 16.4% are at risk, compared with an EU average of 27.9%. After social transfers, only 8.6% of the population receive 60% or less of the country’s median income.

Almost a third (32.6%) of young people and children under 18 are at risk of poverty or social exclusion, and 10.5% of the country’s young people are suffering severe material deprivation. Since 2010, the government’s aim in coping with the results of the crisis has been to reduce the deficit and foster growth – but in the absence of adequate policies to ensure that this growth benefits all members of society, the government’s child policy commission head has stated that the country “is not on track to eradicate child poverty by 2020”, and an independent report in 2013 found that poverty in the country was at its worst level in 30 years.

It is important that policy-makers acknowledge the positive-sum-relationship between greater social justice and growth. Enhancing equal opportunities and reducing inequalities can be conducive to long-term growth. If their aim is to shore up growth, governments would do well to take a broader view: the best guarantee of future growth is to ensure that, in the here and now, growth does not come at the expense of the well-being of society at large.

Authors: Daniel Schraad-Tischler is Senior Project Manager at Bertelsmann Stiftung where he heads the Sustainable Governance Indicators project. He is the author of “Social Justice in the EU – Index Report 2015”. Justine Doody writes for the Bertelsmann Stiftung’s SGI News and BTI Blog.

Image: A boy looks at a man sleeping while asking for alms outside a branch of Spain’s nationalized lender Bankia in Madrid July 26, 2013. REUTERS/Susana Vera