What does the world think about the SDGs?

A recent study by the Pew Research Center reveals that a majority of people in nine selected Sub-Saharan African countries[1] believe their countries need more foreign aid than they currently receive.

However, according to Ipsos, a global research company, the citizens in donor countries are not necessarily eager to provide financial assistance abroad.

Ipsos recently surveyed 12,709 individuals from 17 leading and emerging donor countries.[2] Ipsos asked them: how much they believe their governments currently are and should be spending on foreign aid; whether they perceive Sustainable Development Goals (SDGs) to be important; and, who they think should be responsible for financially assisting developing countries to achieve those goals.

The results of the survey offer new insights into how people feel about foreign aid:

1. Citizens tend to overestimate what their governments spend on foreign aid and want to keep that spending in check. A plurality of respondents believes that their governments devote 3%-10% of their national annual budgets to foreign aid. However, in fact, nearly all of the surveyed countries allocate less than 1% of spending to this purpose. The only exception is UAE, which allocates 4.4% of its annual budget to helping other countries.

When it comes to how much citizens would like their governments to spend on foreign aid, a plurality of respondents consider 1%-5% of the national budget to be a reasonable number. It is worth pointing out that, in UAE, 39% of the respondents think that their government should be spending more than 30% of its annual budget on foreign aid. Meanwhile, more than 20% of the citizens in South Korea, Japan, and Hungary believe that their countries should not offer financial assistance to other countries, at all.

When asked whether “we have a moral obligation to help those less well-off than we are,” only half (47%) of all the participants in the survey said yes. The respondents in India (68%) are most likely to agree that they are notmorally obligated to help those poorer than they are.

3. Generally speaking, citizens in donor countries consider SDGs to be important, yet views differ by country. If not all the respondents are supportive of foreign aid, what do they think about global development? Are the sustainable development goals (e.g., ending hunger and ensuring quality education) important to them?

Overall, there is universal agreement on the importance of 17 SDGs—especially the ones that pursue sustainable management of water, sanitation, and eradication of hunger. UAE (again), Turkey, and South Africa are the three most “supportive” countries, wherein the majority of citizens perceive the SDGs to be “very important.” On the contrary, Japan, South Korea, and Germany are the least “supportive” countries, wherein pluralities of the respondents do not consider the SDGs to be “very important.” This helps shed light on the comparatively lower support for foreign aid spending in certain countries. 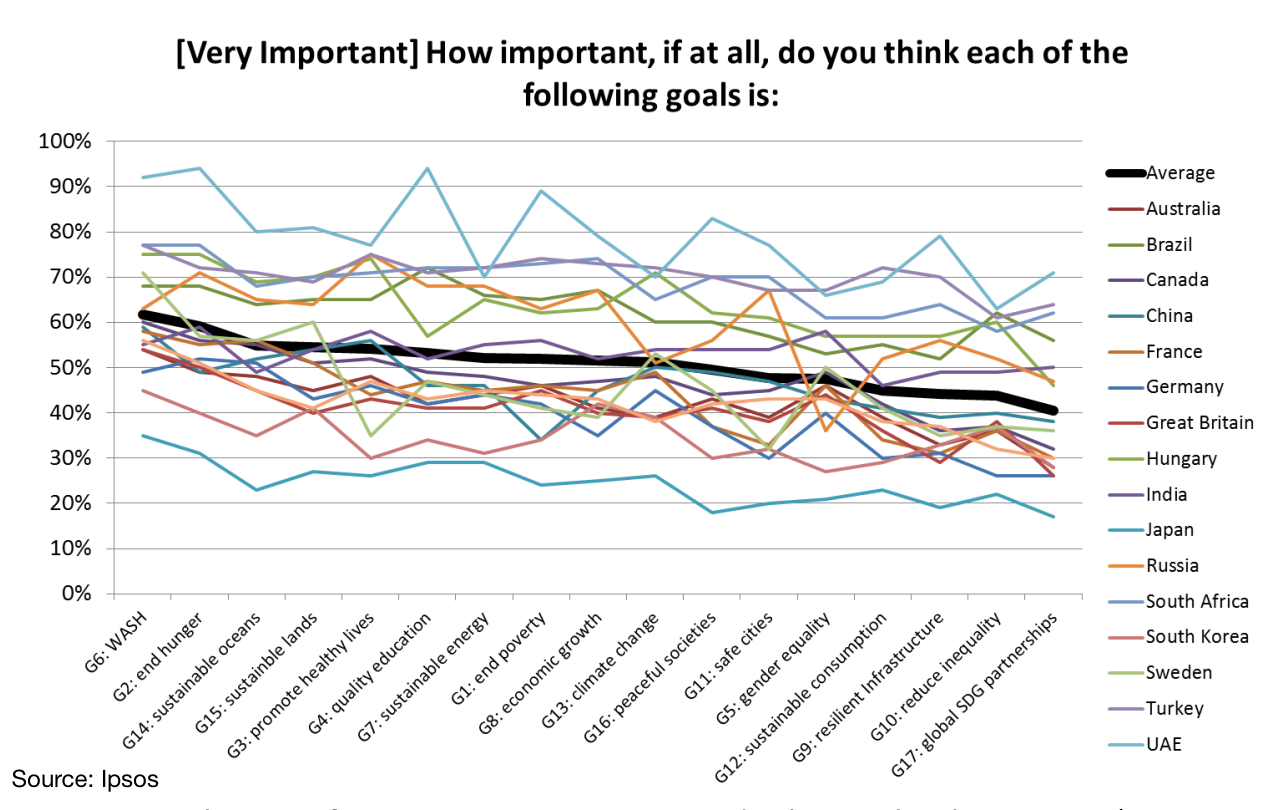 4. Although the SDGs are perceived to be important, people do not want only their own country to be held accountable for helping achieve them. Ipsos asked the respondents in the 17 countries who should take financial responsibility for programs and policies that work towards these SDGs. Results demonstrate that the plurality of respondents believes that it is a collective responsibility, to be shared by “governments of all countries.”

UAE again stands out as the only country where a large percentage of its citizens (32%) believe that “governments of economically wealthy countries” should be paying to help achieve the SDGs. It is noteworthy that a quarter of respondents in Japan, France, Turkey, and Hungary think that international organizations such as the UN and the World Bank should take on more responsibility.

If you are interested in learning more about the country-specific data, or the results from individual survey question in the Ipsos’s study, please visit their website.

Author: Jing Guo is a member of the Public Opinion Research Group of the Global Practice Communications Department.

Image: A girl looks at water flowing from a pump. REUTERS/Amr Abdallah Dalsh.