Does having a degree matter any more?

In the wake of the Great Recession, a meme took hold: That of the overeducated barista, unable to find a job in their field, working instead in a low or middle-skilled position just to get by. By 2011, more than half of college graduates under age 25 were jobless or underemployed. The effect lessened over the past few years, to the point where my colleague Ylan Mui declared the era was “coming to a close.”

But were recent grads really stuck in these jobs that were so far beneath them? In retrospect, a new study from staff at the New York Federal Reservefinds that the reality was a bit more complicated.

First of all, it’s useful to go back a little further than the recession. This isn’t a new phenomenon: The proportion of people within five years of graduating from college working in jobs that didn’t require a college degree actually peaked in the early 1990s, at above 47 percent. It fell dramatically thereafter, rose sharply in the mid-2000s, dropped again, rose in the recession, and has been mostly dropping since 2014. 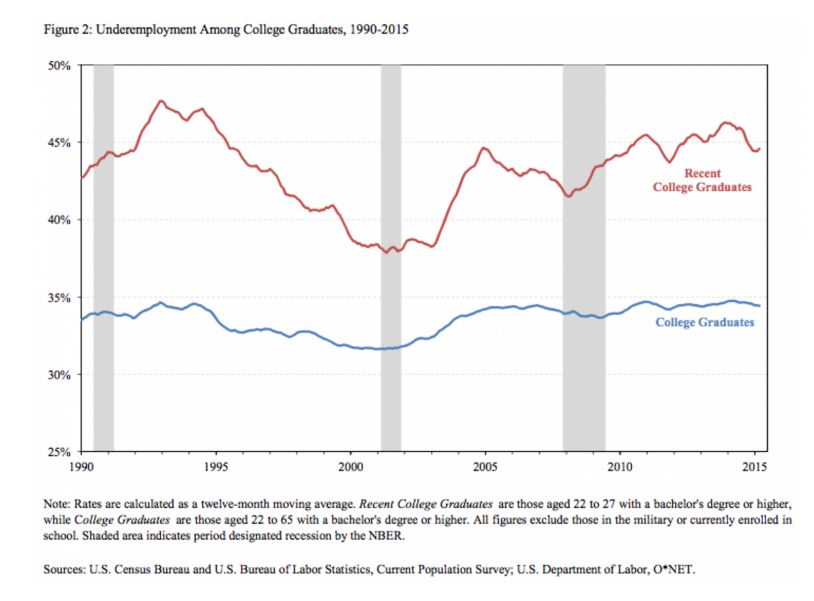 Second of all, it’s true that jobs for the less-educated grew faster than those for the more-educated, starting as the nation emerged from recession. So perhaps if new graduates ended up underemployed, it’s in part because those were the easier jobs to get. Beyond those crude divisions, though, the Fed economists dug a little deeper. There’s actually a lot of variation among jobs that don’t require college degrees, both in skill level and pay, from relatively high-earning IT specialists down to …. well, baristas (and other restaurant workers). The researchers found that the percentage of college graduates employed in the higher-end occupations was twice as large as the percentage of those with no degree at all — and the relationship reversed in the low-end occupations, suggesting some amount of return on that higher education investment.

Finally, it’s worth noting that not all college degrees are created equal. There’s a lot of variation in the underemployment rates of people with different college majors — people who graduated in high-demand fields like nursing and civil engineering, for example, almost never encounter that problem. More generally, those who major in technical subjects or ones that involve specific career training are less likely to face underemployment than those who study something more broad, like anthropology or communications.

(That’s why Marco Rubio was both right and wrong about philosophers and welders — while career philosophers earn more than welders, those who studied philosophy are more likely to find themselves in jobs that don’t require all that training.)

But don’t fret too much about the English majors who can’t find a job in their field right out of college. The Fed’s study found that underemployment is mostly a transitory state — the percentage of 22-year-old college grads working in low-skilled service jobs falls from 13 percent to about 6.7 percent by the time they’re 27, for example. They may still bear lifelong scars from the Great Recession, but things do get better.

Author: Lydia DePillis is a reporter for The Washington Post focusing on labor, business, and housing.

5 ways to manage a crisis, according to McKinsey

The importance of books as we struggle with COVID-19

Homeschooling during the coronavirus pandemic could change education forever, says the OECD

4 ways COVID-19 could change how we educate future generations