How is ageing affecting US unemployment rates?

The U.S. economy added 211,000 jobs in November, according to employment data released today by the U.S. Bureau of Labor Statistics. The employed share of the nation’s population in their prime working years (ages 25 to 54) jumped to 77.4 percent but still remains below healthy levels. One oft-cited explanation for the low overall employment rate—the aging of the U.S. population—does not satisfactorily explain the slow labor market recovery.

Hourly wages for private-sector workers in the United States grew by 2.3 percent at an annual rate last month—well below a goal of at least 3.5 percent, which is consistent with long-term productivity growth and inflation targets. As has been true every month this year, production and non-supervisory workers saw smaller pay increases, at an annual rate of 2.0 percent, suggesting rising wage inequality. Wages grew somewhat faster in retail industries (2.7 percent) and the leisure and hospitality sector (2.6 percent), which includes restaurants. Retail-sector and restaurant wage increases this year are primarily a consequence of minimum wage increases, political pressure, and an improving labor market.

Wage increases in restaurants have been running faster than price increases in that sector, as some commentators have noted. But even if pay raises for restaurant workers are fully passed onto consumers, we should still expect the price inflation resulting from these wage changes to be smaller than underlying pay increases because labor is not the only cost of business. In restaurants, labor makes up roughly one-third of total business costs, so a 10.0 percent increase in wages would only result in a 3.3 percent increase in prices. The final price increase could be closer to just 1.0 percent if the 10.0 percent wage increase was only for minimum-wage workers, since less than 30 percent of workers in the restaurant industry earn near the minimum wage.

Turning to employment, establishment survey data from the Bureau of Labor Statistics showed that, with the addition of 211,000 jobs in November, the U.S. economy has added an average of about 218,000 jobs over the past three months. Monthly job growth this year has averaged about 210,000, slower than the average of 260,000 last year. Most of the job growth last month occurred in construction (46,000) restaurants (33,000), and health care and social assistance (32,000). The overall unemployment rate remained at 5.0 percent, after falling by 0.7 percentage points so far this year. In a notable change last month, the employed share of the prime-age population (ages 25 to 54) rose 0.2 percentage points to 77.4 percent, but this is the first time the rate has moved above its value of 77.3 percent in February. In the absence of much higher employment rates for the prime-age population, we are unlikely to see sustained, broad-based wage growth. 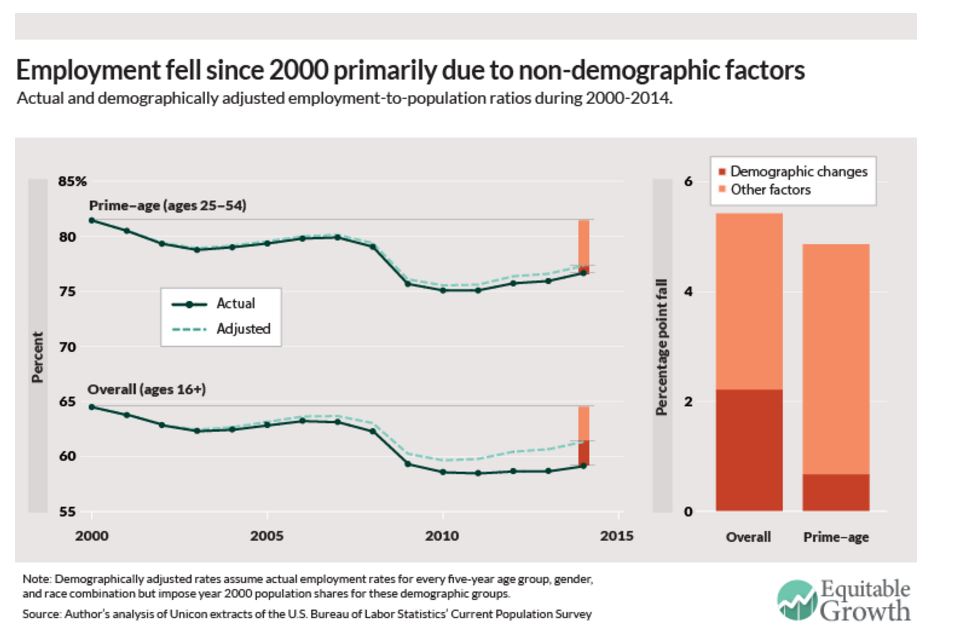 A simple way to determine how much demographic changes have lowered employment is to assume the U.S. population today has the same age, sex, and racial structure as it did in 2000, and to use each of these groups’ current employment rates. The overall employment-to-population ratio for those aged 16 and older fell from its high point of 64.5 percent in 2000 to 59.2 percent last year. Had demographics not changed since 2000, the rate would have fallen to 61.3 percent, so demographic changes account for about 40.1 percent of the fall in the overall employment rate.

Prime-age workers stopped participating in the labor force during a weak labor market, indicating that there is plenty of room for the labor market to improve before truly tightening.

Conflict and violence cost the world more than $14 trillion a year. Just a 2% reduction in conflict would free up as much money as the global aid budget.

The pandemic has accelerated remote working, but there are longer term benefits and drawbacks, with impacts on productivity, GDP and inequality.

This chart shows how COVID-19 has affected the U.S. labour force