What is cognitive reserve, and how do we increase it?

This article was originally published on The World Bank’s Voices blog.

In our previous blog post, we wrote about how getting a good head start in brain development builds the foundation of our cognitive abilities. It puts us in a path towards socio-economic success and makes us more resilient to aging and mid-life adversities. In this post, we’ll discuss how early-life experiences influence the development of socio-emotional abilities and of a more resilient brain, and how this new evidence can help development professionals design cost-effective policies that take into account a person’s human development during his/her lifetime. 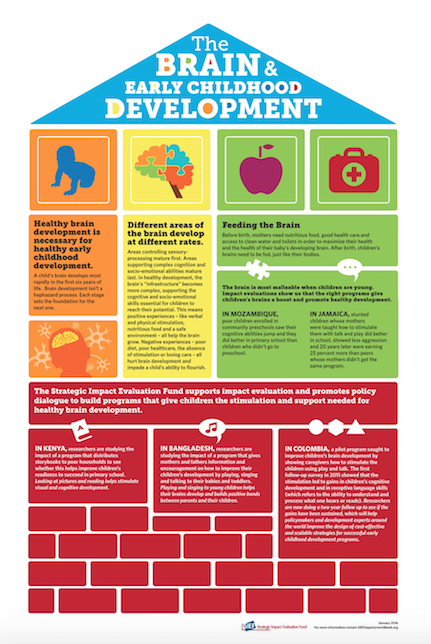 Optimal brain development can in turn make healthy aging possible. As Jack Shonkoff and colleagues have put it: “Many adult diseases are, in fact, developmental disorders that begin early in life.”

Neuroscientists coined the term “cognitive reserve” to understand why some individuals are able to remain cognitively healthier despite biological (warding off diseases such as Alzheimer’s) or social adversity (toxic stress from calamities or personal losses).

People with high cognitive reserve maintain higher levels of cognitive functioning. This means that their brains remain more malleable and more capable of learning new things throughout their lives. They not only navigate adversity more successfully, but also tend to create opportunities in unfavorable circumstances.

Scientists are uncovering ways to acquire more cognitive reserve. Successful early brain development during childhood is critical. It provides a person with a greater number of neurons, more synapses (neural connections), and multiple pathways to perform any task. Such “reserve” comes in handy when a person is faced with the effects of brain aging.

An engaging lifestyle can also increase or maintain cognitive reserve. One can do this by acquiring more education and working in more complex occupations (e.g. working with data).  Simply being exposed to challenging mental activities (e.g. reading, playing board games) and regular physical exercise also helps!

In addition to cognitive skills, socio-emotional abilities such as self-discipline, perseverance, adaptability, and working well with others are firmly rooted in successful childhood development. Cognitive and social-emotional skills are inextricably entwined in the wiring of the developing brain. They are the reason why people can perform complex tasks that often require one to resist impulses, regulate emotions, and pursue long-term goals.

People with strong motivational abilities (perhaps grittier individuals) have greater resilience to severe cognitive decline. For instance, a study in Germany found that middle-aged people who were employed in occupations requiring high motivational abilities had a 35% lower risk of developing mild cognitive impairment by age 75 and above, regardless of their intelligence, education, and other job-related abilities in mid-life.

In another study of 65-year-olds in the United States, those with a high level of conscientiousness (the personality trait linked to being organized, careful, and goal-oriented) had an 89% lower risk of Alzheimer’s disease 12 years later. In addition, social interactions can have a positive effect on cognitive aging given that managing and reading others’ emotions involve complex brain tasks.

Designing human development policies with the brain in mind

Many of the qualities of brain resilience to deal with biological and social factors are shaped in early life. With the appropriate investments extending beyond early-life, resilience can be sustained with life-course investments for highest returns. Interventions directed at cognitive domains may change personality traits such as openness to experience, and this in turn can lead to a more active and engaged lifestyle that helps preserve cognitive functioning during aging.

People from the most disadvantaged backgrounds and with the greatest disease burden, need this investment the most. Everyone deserves a good head-start and the attainment of optimal brain development to become resilient to potential life-course adversities and aging.

It is important to ensure that interventions targeting skills acquisition and human development across the lifespan are holistic and target both cognitive and socio-emotional domains. This can bring both labor market returns to higher skills acquisition and savings in healthcare due to the high costs associated with aging-related cognitive disorders such as dementia.

Although we now know more about the link between the brain and human development, much of what we know is based on populations from high income countries. We know very little about the effects of poverty in low-resource settings on the developing brain structure and function. Some exciting initiatives are starting such as the setting-up of the first fully equipped neuroimaging facility in Bangladesh.

Also, there are virtually no randomized control design studies to study cognitive reserve involving interventions and quantification of brain burden. There are attempts to accommodate interventions as part of the long-term studies such as the Aberdeen Children of the 1950s and the UK population cohort data.

Data from studies that follow individuals over their life course are rare in developing countries. This is slowly changing with several longitudinal studies now documenting the long-term benefits of early childhood programs for children living in poverty and initiatives like the Young Lives which has been following cohorts of children since birth in Ethiopia, India, Peru and Vietnam, some of whom are now in their youth.

Some studies are now using such data to evaluate interventions. For instance, the decades-long follow up study of the celebrated Jamaica Early Childhood Development intervention found that the babies whose mothers were taught how to stimulate them through play and language were earning 25 percent more as young adults than those who did not benefit from the intervention. A program in Indonesia, began in 1989, expanded access to midwives in villages to mitigate the effects of prenatal nutritional shocks, and it was found to improve the nutritional status of young children. Researchers are now evaluating the long-term impacts of the program on the cognitive development, education and employment of these children who are now turning young adults.

As the costs of neuroimaging falls, future rigorous evaluations of such types of interventions targeting childhood development could incorporate measurement of the functioning, structure and aging of the brain. The findings from this research can greatly enhance the World Bank’s ability to carry out more cost-effective policies to foster human development over the life-course, eliminate extreme poverty and improve shared prosperity.

Authors:  Dorota Chapko is Consultant for the Strategic Impact Evaluation Fund (SIEF) at the World Bank. Omar Arias is the Practice Lead Economist of the Social Protection and Labor Global Practice and Global Lead for skills at the World Bank.

Image: A woman walks past a display of a brain slice of patient. REUTERS/Brian Snyder.