What’s the future of blockchain?

Blockchain technology, the tech that powers cryptocurrencies like bitcoin, is all the rage on Wall Street. A recent report from financial technology consultant Aite estimated that banks spent $75 million this year developing the technology. But Silicon Valley venture capitalists appear even more eager to make bets on blockchain. 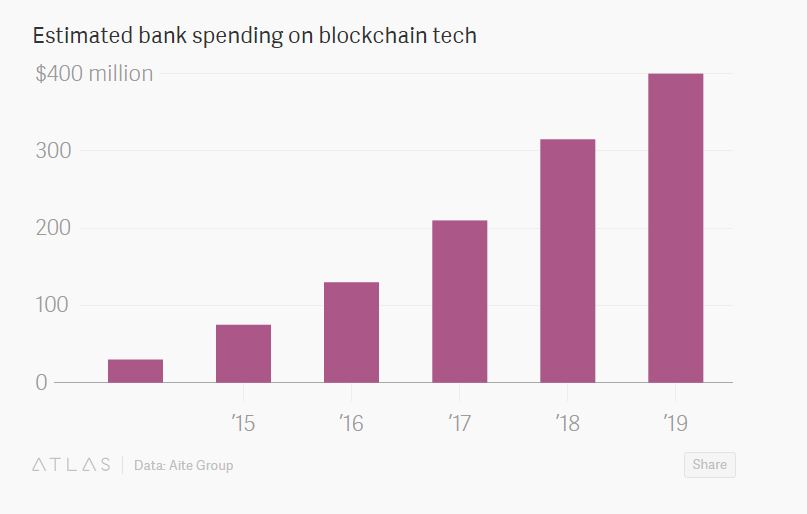 In a separate report released this month, Aite estimated that angel investors and venture capitalists have poured $180 million into blockchain startups this year.
The report illustrates the growing interest in blockchain—a sort of digitized, public ledger—from both financial firms and Silicon Valley venture capitalists.
Financial firms are trying to develop the technology to use internally, with a particular focus in using it for functions such as settlement. Settlement is the crucial but unglamorous process of exchanging cash and securities between buyers and sellers.
Goldman Sachs filed a patent in October 2014 for SETLCoin, a cryptocurrency built on the blockchain to help Goldman traders execute and clear trades in real time. Elsewhere, JPMorgan, the London Stock Exchange Group, Wells Fargo, and State Street recently announced they joined a consortium with IBM, Intel, and Cisco and blockchain startup Hyperledger (now owned by Digital Assets Holdings) to develop blockchain technology.
Some VCs are also interested in backing finance-centric blockchain companies. Chain, a blockchain company working with NASDAQ on a new trading platform, raised $3o million dollars from both finance giants like Visa and venture capital firms like Khosla Ventures.
Publication does not imply endorsement of views by the World Economic Forum.

Author: Ian Kar is a contributor for Quartz.

Image: A Bitcoin (virtual currency) paper wallet with QR codes and a coin are seen in an illustration picture. REUTERS/Benoit Tessier.