Which are the best cities for students?

Paris has been ranked the top student city in the world for the fourth year running, according to the QS Best Student Cities 2016 index. So what makes the City of Light such a popular place to study?

QS, an organisation which produces university guides and rankings, says that Paris has held on to its top spot due to its high concentration of internationally recognized universities, with 18 Paris-based institutions featuring in its list of top universities around the world.

Although the city has a reputation as an expensive place to live, relatively low tuition fees make it a more affordable option compared to other popular student cities. 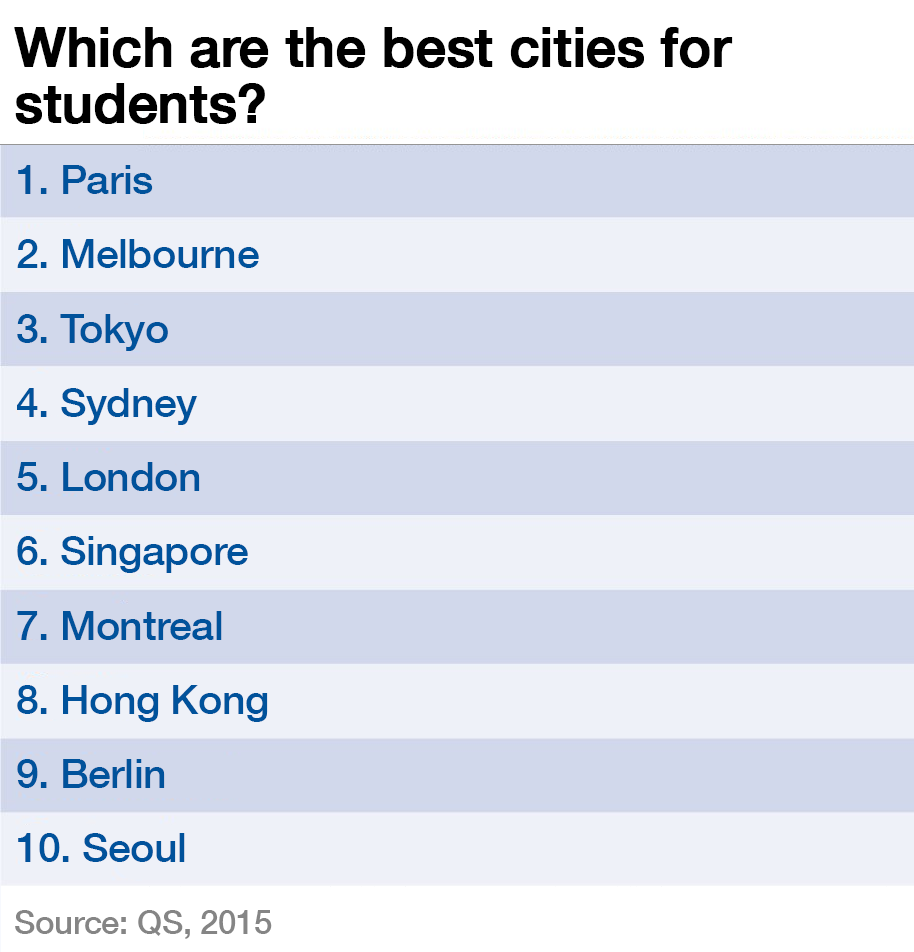 QS notes that the measurements used to create the Best Student Cities index fail to take into account the “real appeal” of studying in cities, such as Paris, which it says is, “one of the world’s most historic, culturally vital and beautiful cities”.

Melbourne takes the second spot in the overall ranking, but is the highest scoring city for “student mix”, which takes into account the relative size and diversity of the city’s student population, as well as levels of social inclusion and tolerance.

The best city for “employer activity” is Tokyo, which is ranked third overall. As one of the world’s leading financial centres, Toyko offers professional and internship opportunities for students and its students are the most highly sought after by graduate recruiters. Tokyo also scores well in the “desirability” category.

Sydney is placed fourth overall, but takes the top spot for most desirable city. This category takes into account safety, quality of living, tolerance, transparency and pollution. Sydney’s collection of green spaces, proximity to beaches and iconic landmarks boost its popularity as a destination for students.

Berlin, which is fourth in the affordability category, offers students culture, a high standard of living and value for money, according to QS. This is due to recent legislation making all undergraduate higher education free in Germany, even for international students.

Have you read?
The most expensive cities to be a student
What do successful students have in common?
Which are the world’s top universities?

Image: A general view of the Eiffel tower and La Defense business district skyline in the background. REUTERS/Jacky Naegelen.

Flying taxis might be closer than you think. Here's what the experts say

McKinsey experts discuss the future of mobility with affordable, safe and sustainable solutions for travel, and the possibility of autonomous flying taxis.

Miami plans to give out cryptocurrency funds to residents with the city earning over $21 million in the past 3 months through its investment in MiamiCoin.

Turning urban sprawl into a net-zero city. Lessons from Melbourne

If the world's 1 million municipalities were nature-positive, we could tackle climate change