Which countries benefit from their diaspora’s skills?

This article is published in collaboration with VOX EU.

The recent refugee crisis in Europe has once again focussed the debate on migration on whether accepting migrants from poor or war-ravaged countries is an ethical duty, and an affordable one. At the same time, economists keep investigating migration as a critical facet of the global economy. One important concern is the cost-benefit analysis of migration for the migrants’ origin countries – does migration, especially of highly skilled individuals, deplete the origin countries’ human capital (i.e. a brain drain)? Or does it increase their social capital, in the form of valuable contacts with their communities of expatriates? (Docquier and Rapoport 2012, The Economist 2011). These ideas resonate well with policymakers and international organisations (OECD 2012). Nowadays a dozens countries have “a ministry, a government department or some other official institution dedicated to their diasporas” (The Economist 2015).

Due to the increasing importance of innovation-led economic growth and the booming numbers of highly skilled persons among migrants, more and more attention has been paid to the migrants’ contributions to knowledge stock and innovation (brain gain) (Bhagwati and Hanson 2009). Yet, systematic empirical evidence is still limited to very few studies (Kerr 2008, Agrawal et al. 2008, 2011) and far from being conclusive. A number of open questions remain, such as whether some initial positive findings for migrants from China and India in the US can be generalised to other countries of origin. In a recent paper (Breschi et al. 2015), we document and analyse migrant networks and their role in diffusing technical knowledge, both within the US as well as back to their homelands.

We use patent, citation and inventor data from applications to the European Patent Office (EPO) to proxy knowledge flows and migrant networks, as well as a case-control approach and regression analysis to test the importance of several migration-related effects.

The US research system (both industrial and academic) has been an historical destination for foreign-born scientists and engineers. Universities have been playing a key role in encouraging the inflow of foreign students and postdocs, the former now making around 45% of graduate students enrolled in science and engineering programmes, and around 60% of postdocs (2006 data, as reported by Black and Stephan 2008). Migrants account for 25% of US science and engineering and 26% of US-based Nobel Laureates (Kerr 2009, Black and Stephan 2008) – and for about 12% of the entire US labour force.

Social ties between migrants in the destination are interesting because, if strong, they attest the existence of a cohesive community (a ‘diaspora’), which can transmit knowledge in a more effective way than a collection of sparse individuals.

Patent data for the analysis of highly skilled migration

The paucity of quantitative evidence comes chiefly from the lack of systematic data. A partial remedy comes from the dataset released by the World Intellectual Property Organisation, which records both the residency and, most importantly, the nationality of inventors listed on a special class of patents (those going through the Patent Cooperation System). World Intellectual Property Organisation data show that, besides China and India, the most important sources of migrant inventors are developed countries such as Germany, the UK, Canada, the US, Italy, and South Korea. These are followed by a mixed group comprising Russia, Japan, Sweden, Israel, Switzerland, Iran, and Mexico (WIPO 2013, see Miguelez and Fink 2013 for details).

In our research, we complement World Intellectual Property Organisation data with patent applications to the European Patent Office from 1980 to 2010, both to have a larger sample and to include in the analysis US-nationals with a distinctive foreign origin. To do so, we rely on an analysis of the inventors’ names and surnames, based a dataset containing over 700.000 names and surnames, plus information of their distribution across and frequency in countries other than the US (as derived from US immigration authorities). We consider all inventors who resided in the US at the time of their patents and whose country of origin is one of the following – China, India, Iran, Japan, and South Korea (for Asia). France, Germany, Italy, Poland, and Russia comprise the Europeans. These countries figure among the top 20 sources of high skilled migrants to the US according to OECD/DIOC data, release in 2005/6 (Widmaier and Dumont 2011). At the same time, none of them has English or Spanish as official languages, which are the most widely spoken languages in the US, making it hard for us tell migrants apart from locals. Figure 1 shows the shares of US residents’ European Patent Office production by foreign origin countries. 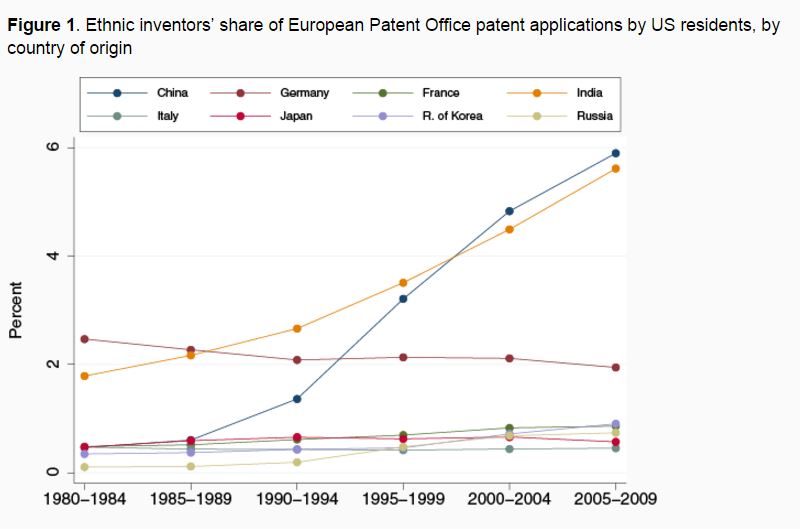 Who forms a diaspora?

We find evidence of a diaspora effect to exist for most Asian countries in our sample (China, India, South Korea, and, to a lesser extent, Japan) and for one European country (Russia). Figure 2 reports, in a simplified way, the results of our econometric exercises. The top panel tells us how much the probability to observe a citation between two patents increases, when the inventors of both patents reside in the US and come from the same country of origin (as opposed to US-residents who do not share the country of origin and controlling for various mediating factors). Chinese or Russian common origins increases the citation probability of around 6%, followed by around 4% for South Korea, and 3.5% for India and Japan. The effect is instead non-significantly different from zero for all the other countries of origin considered.

While intriguing, these results should not lead us to over-emphasise the importance of co-ethnic ties. Their impact on knowledge diffusion appears to be secondary to the proximity in the physical space (as when inventors are co-located in the same city or State) and in the professional community (as when two inventors have past collaboration experiences, or have some collaborators in common). In a sense, we find that co-ethnicity ties appear to act as substitute of physical and professional proximity – they bind otherwise distant inventors.

Figure 2. How much does the probability of citation between two patents increase?

Notes: Grey bars indicate non-significant coefficients. Coefficients for Panel A are drawn from regressions shown in Column (2) of Table 4 in Breschi et al. (2015), while from Column (9) of Table 9 for Panel B. Regressions include all the controls, as well as interactions between each ethnicity and the dummy MSA (for Panel A) and each ethnicity and the dummy Same Company (for Panel B). Iran and Poland are excluded from this figure because of their low figures in Panel B regressions.

Does India gain from its expatriate talent?

Coming to the brain gain effect, we observe it only for two BRIC countries (China and Russia) as well as for South Korea. This can be seen in the bottom panel of Figure 2, which reports the increase in the citation probability between two patents, one filed by a US-resident inventor of foreign origin, the other by an inventor residing in the former’s country of origin. The increase is very large for Russia (around 14%), South Korea (around 10%), and China (around 4%), and it is non-significantly different from zero for all the other countries. A joint reading of these figures with those in the top panel suggests that it may not always be the case that a cohesive diaspora abroad will produce significant ‘knowledge remittances’ to the home country. In this sense, it is striking that this seems to apply to India, which is often cited as a successful ‘brain gain’ case (notice however that our results are in line with Agrawal et al. 2011).

What other international channels of knowledge diffusion?

Other results in our paper point at the role of multinationals in transferring knowledge (citations) across the US and the home countries of foreign inventors. This effect is particularly important for more advanced countries such as France, Italy, and Japan. As for BRIC ones, we observe that the number of expatriate inventors can be very large compared to that of home-country resident inventors. This opens the possibility of an ‘international diaspora’ effect, one by which the inventors from the same country of origin, who reside in different foreign countries, exhibit a higher-than-average probability of citing each other. For India, this suggests that the lack of a ‘brain gain’ effect at home may be more due to problems of absorption of knowledge generated by its diaspora, than with a limited capability of the diaspora to diffuse knowledge on a global scale.

The strength of diaspora ties, and their brain gain effects vary across countries – they appear to be stronger and productive for China, Russia and Korea, less so for India, and unnecessary for Western European countries (which obtain knowledge from the US through their multinationals).

At this stage of our research, we can only speculate on the sources of such differences. Despite imperfections in our name-based method for identifying migrants, our results appear robust enough to rule out the exclusive effect of measurement errors. Still, the cohort composition of migrant communities (the different mix of first- and further-generation migrants between recent Asian migration wavers, and older European ones) play a role, as well as the composition by migration channel (with migration from BRIC possibly occurring more often through the higher education system, and that from advanced countries through multinationals). We will dedicate future research to assess the validity of these intuitions and to investigate policy implications, which we cannot yet deliver on the basis of the present findings.

Kerr, W (2009), “The Agglomeration of US Ethnic Inventors,” Working Paper No. 15501, National Bureau of Economic Research.

Meyer, J.-B., and M. Brown (1999), Scientific diasporas: A new approach to the brain drain, Management of Social Transformations (MOST) Programme.

The Economist (2015), “Gone but not forgotten”, available at http://www.economist.com/news/international/21656176-governments-believe….

Widmaier, S, and J-C Dumont (2011), “Are Recent Immigrants Different? A New Profile of Immigrants in the OECD based on DIOC 2005/06”, OECD Social, Employment and Migration Working Papers, Organisation for Economic Co-operation and Development, Paris.

Young people around the world are developing new and innovative technologies to help in the fight against COVID-19. Here are five of them.

Sarah Shakour and Natalie Pierce 20 May 2020

COVID-19: Collaboration is the engine of global science – especially for developing countries

The coronavirus pandemic has shown how vital collaboration is in making the benefits of research available to all – and open-source knowledge-sharing is key to its future.

From me to we: COVID-19 heralds a new model of entrepreneurship

How coronavirus sparked a wave of innovation in India

Sreevas Sahasranamam · The Conversation 11 May 2020

This is what COVID-19 did to start-ups in China