The rise of the sharing economy in Indonesia

Indonesian consumers are benefiting from new ‘sharing economy’ platforms such as Uber and Airbnb, but barriers remain to collaborative firms.

Since 2013, Indonesia has seen the birth of home-grown sharing platforms such as Gojek, a startup that provides a platform for motorbike ride sharing, and Ojek Syar’i, which provides an online booking service for Muslim female motorbike taxi drivers in Indonesia, as well as the introduction of Uber and Airbnb.

87% of Indonesians are likely to use products or services from others in a share community, compared to 66% of the global population, according to a survey conducted by Nielsen in 2014.

The projection is not surprising. The sharing economy offers a number of advantages: lower prices, stronger communities, a greater number of players in the market, and greater access to services that were once regarded as a luxury (Ranchordás 2015).

It allows consumers to fully utilise excess or idle resources, and to access resources without necessarily purchasing or owning them.

Competition with the traditional economy

The sharing economy is changing consumption patterns all over the world (Zervas et al 2015), not just increasing economic activity.

This is also the case in Indonesia. Hotel owners and Taxi drivers have been hit hard by new sharing platforms like Airbnb, and ride sharing apps like Go-jek and GrabBike.

It’s too early to know the impact of ride-sharing apps on traditional taxis, as they were initially banned by local government. However, we can look at differences in fare and capacity to analyze how ride-sharing applications may affect competition in the industry.

The chart below illustrates the fare comparison between regular taxis Blue Bird and Express, UberX, and UberX with 2x surge, assuming the vehicles experience the same traffic congestion. During peak hours, Uber fares are multiplied between 1x (normal hour) to 3.5x, depending on demand (Credit Suisse, 2015), as represented by UberX with 2x surge.

The UberX fare is generally cheaper than regular taxis during normal hours, but the longer the distance being travelled, the bigger the fare difference between regular taxis and UberX becomes.

Assuming no stops occur during travel, regular taxis will generally be cheaper than UberX with 2x surge. This implies that in terms of price, there is a room for traditional taxi providers to compete, especially during peak hours.

Source: Own calculation based on data from Blue Bird, Express, and Uber websites.

Notes: Non-promotion rate. Jakarta vehicle speed is 12-14 km/h; the riding period in the calculation assumes 13km/h speed, no stop, and no multiplier (for Uber).

Uber currently has only has 1000 drivers operating in three cities in Indonesia, meaning that their reach is relatively small, compared to Blue Bird, which has23000 fleets in 14 cities, and Express, which has 10000 fleets distributed across seven cities in Indonesia.  Uber cars probably make up 2-4% of the industry’s total fleet (Credit Suisse, 2015).

According to this price and capacity comparison, sharing platforms in Indonesia are not anti-competitive. Traditional taxi providers are able to compete in terms of price, and ride-sharing platforms still have much lower capacity.

In Jakarta the ratio of taxis to people is still very low at 1.4 taxis per 1000 people, especially in comparison with other cities in Asia. This implies that there is room for additional fleets in the city. 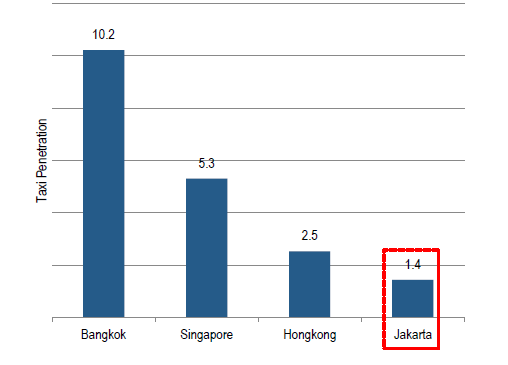 Increased competition from the sharing economy has had positive results in Indonesia. The two major taxi companies in Indonesia, Express and BlueBird, have created their own mobile applications which allow users to order a taxi, see the estimated fare and track the driver’s real time position. Arguably this gives regular taxis the edge in terms of reservation method, because they also have  call centres for non internet users.

Traffic jams and accessing public transport have been longstanding issues in Jakarta. The proportion of consumers using public transport declined from 35.5% in 2002 to 12.9% in 2010 (JUTPI in Sumaedi et al, 2014), due to underdeveloped, difficult to access, inefficient, and dangerous transport networks.

Commuters are increasingly buying their own cars, which, without road network development, worsens traffic problems.

The local government in Jakarta is planning numerous reforms in public transport, including building the Jakarta Mass Railway Transport (MRT). The first corridor of MRT, however, will only operate in 2018. This is where ride-sharing application steps in.

To increase the efficiency of the current main public transportation in Jakarta and meet short term demand, local government has set up a ride-sharing online application, Go-Jek, to create a passenger information system, whichallows users to order motorbike taxis from and to  bus shelters, and to track  buses  in real time; these features are important considering that bus shelters are not always within short walking distance and that buses do not have a predictable schedule.

Most sharing economy ventures operate as smart phone applications, but  in 2013 only 23% of Indonesians had smartphones, fewer than in some other developing Asian countries.

Nevertheless, due to its large population, it is estimated that Indonesia will have 92 million smart phone users by 2019, 47% of mobile phone users. Although at the moment access to online sharing economies remains a barrier for businesses, smartphone use is growing rapidly.

Another technical issue is payment method, which has set apart the Silicon Valley-based and Asian-based sharing platforms. Silicon Valley-based sharing platforms, such as Airbnb and Uber, use credit card as their main method of payment, while Asian counterparts, such as GrabCar, GrabBike, and Go-Jek, mainly use cash. Blue Bird, the biggest taxi company in Indonesia, provides both options.

Credit card use in Indonesia (2011) is comparatively low, at 5%; Cash (51%) and debit card (29%) remain the most favorable payment methods.   Consumers across Southeast Asia still prefer to use cash, which means that US-based companies wanting to increase their market share in Indonesia and Southeast Asia will have to consider implementing cash as payment option in order to tap the wider market. 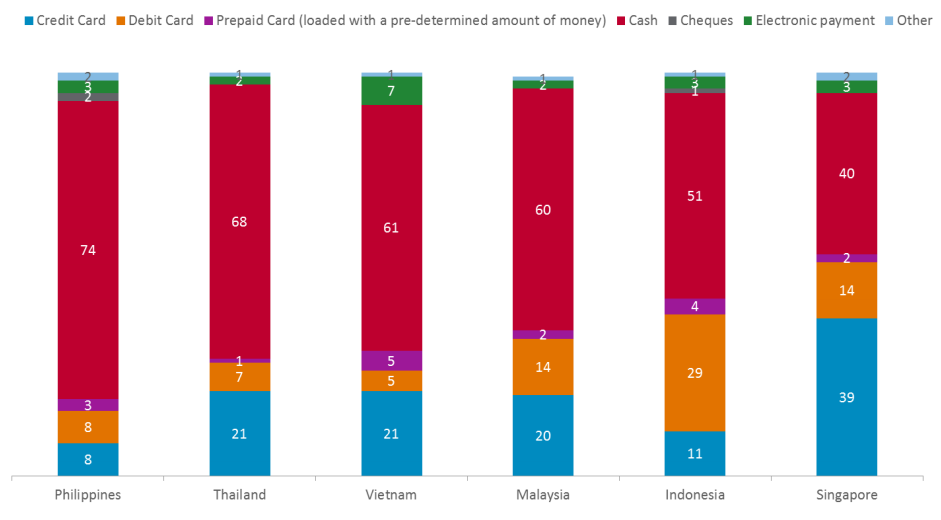 Zervas, G., Proserpio, D., & Byers, J. W. (2015). The rise of the sharing economy: Estimating the impact of AirBnB on the hotel industry. Retrieved from http://people.bu.edu/zg/publications/airbnb.pdf

Author: Cassandra Liem was a research intern in Bruegel in November and December 2015.

Image: A motorist rides his motorbike between cars on a main road in Jakarta. REUTERS/Beawiharta.

More on Supply Chains View all

How to reinvent supply chains in a new global economic order

European supply chains need to become more resilient and future-ready after facing major disruption due to COVID-19 and Russia's invasion of Ukraine.

How to better manage disruption with responsible value chains

Project Last Mile: How forming unlikely partnerships can have a positive impact