Prisoners, patience and women in leadership

A decade ago, eight inmates in the most violent prison in South Africa started an AIDS orphan adoption programme. All men, the prisoners of the “Group of Hope” had murdered for rage, gangs, robbery and racial hatred. They were white, black and mixed race; Muslims, Christians and atheists.

Against all odds, the programme has changed the lives of hundreds of prisoners and orphans. The subject of my next book, it is astonishing for obvious reasons.

But the most astonishing fact lies not in the bizarre inmate-orphan relationship. It is instead a piece of contextual data that my mother came across, while creating AidsBuzz, a database of South African organisations tackling AIDS.

AidsBuzz had featured hundreds of the most courageous, innovative grassroots organisations to be found anywhere in the world. Of their founders – leaders and entrepreneurs in the most exalted sense – fewer than 5% were men. And amongst these few was a group of murderers: the only men of whom society expected nothing.

I wish the women in leadership debate was no debate. But when you see a figure like this, and then attend yet another a conference with a handful of women speakers, one cannot but pause, indignant. To wonder what might be, if the business class cabins of the planes that sweep shadows over women quietly changing the world from the bottom up, catered to a few more of them at the top.

Showcasing the work of women already in leadership roles is one piece of the solution. The Young Global Leaders is doing just this. Another is enabling women leaders to be more accessible to younger women – as a route to jobs, capital and advice.

The importance of democratising access – between those with talent and ideas, of either gender, and those with wisdom and resources – is the reason I co-founded OneLeap. An online social enterprise, OneLeap enables people starting out in their careers to send short messages to our profiled decision-makers – in return for a modest charitable donation, which shows they are serious.

Already a disproportionate number of OneLeap connections have been made by younger women contacting more established women. Even more strikingly, of the hundreds of decision-makers we invited to participate, all but two of the women said yes.

Whether at the top, possessing much, or at the bottom, possessing little, women consistently say yes to helping those with less than them; consistently listen to those with different ideas and perspectives to their own. Such leadership may be frustratingly quiet. But it is also patient, and in this incredibly powerful, sowing seeds for a very different future. 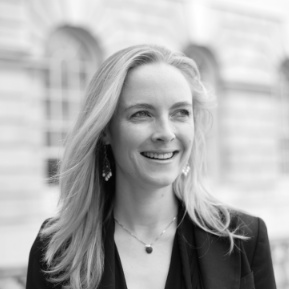 Robyn Scott is Co-founder of OneLeap and Mothers for All. She is a social entrepreneur and an acclaimed author. She is also an Ambassador for the Access to Medicine Foundation, a Gates Cambridge Scholar and a 2012 Young Global Leader. http://robynscott.org

Robyn Scott, Co-founder, Mothers for All