What if unemployment threatens our democratic way of life?

Sharan Burrow warns that we face a downward spiral without coordinated international efforts on job creation, in an interview for the Risk Response Network’s “What if?” series. You can read the World Economic Forum’s latest report on employment issues here.

What is your main field of expertise and current research?
My job is to represent working people. There are many ways in which I do this, so area of expertise is an interesting question. It could be in a crisis response frame in terms of conflict or risk for workers, or it could be in a development frame, proposing alternate growth strategies to drive jobs and create income, which is the basis of demand. It could be in a rights frame, making formal complaints to courts or to international institutions like the International Labour Organization, or drafting labour laws, or working on campaigns against racism and xenophobia, or it could be bargaining on living standards, wages, conditions and the rights that underpin secure living standards and job security.

Given your research, what would you say is the most under-appreciated risk?
The most immediate and under-appreciated risk is the unemployment crisis. Globally, there are 210 million people out of work. That is the highest on record, but there are millions more, particularly women and young people who are not on the statisticians’ books.

Forty-five million young people every year seek to enter labour markets that cannot accommodate them. If we do not construct 620 million jobs over the next 10 years, we are not going to meet people’s demand for job security, income security and the ability to support a family. The world has lost sight of what was once a primary ambition: full employment. Unemployment threatens to be a real crisis in terms of social tension, political risk and economic instability.

If there are not jobs or adequate forms of social protection, there is not enough income to create the consumption base that drives demand and sustainable economic growth. This has been ignored for far too long. We have had jobless growth now for a couple of decades. We’ve had the lowest share of productivity in terms of wages for three to four decades, depending on the country, and inequity is growing. Inequity was an emerging issue before the global financial crisis and now, with the second wave of financial calamity, inaction on employment and social protection has fuelled the problem and contributed to the risks that the world faces going forward.

How would you frame this risk as a hypothetical scenario: “what if” this was to happen?
If governments continue to ignore the unemployment crisis, there is a serious risk of social tensions and indeed a risk to our democratic way of life.

Who would be impacted the most, and how?
Nobody wins from ignoring the unemployment crisis. Families do not win because they have children without work or older workers who lose their jobs and cannot find new ones. Governments do not win because of social tensions on the streets, like those we now see in Greece, Spain and Israel. The revolutions in the Middle East also demonstrate what happens when you have people with no security.

Society does not win because we lose safe neighbourhoods and even democracy is threatened. At worst, there are civil and indeed global war scenarios that will come from having 45 to 70% of the younger generation without employment, without hope. Older workers face the desperate situation of not being able to care for their family or parents. In many societies with ageing populations it is a scenario that is becoming too desperate to think about. We need action on employment; we need action on social protection.

How well do you think we are prepared for such a contingency?
Every politician acknowledges that employment growth is a priority and, of course, in the context of the global financial crisis, initiatives like the Obama jobs plan give people hope. It is the right approach in theory, but no national leader can solve the problem alone. It requires a coordinated global strategy.

What is your top mitigation approach for this risk?
There is no doubt that we need international collaboration. The global economy is so interconnected that while governments have to act in the interest and the context of their own nations, we saw what coordinated action could do when governments took action together to stop the haemorrhaging of the banks and indeed of jobs in the 2008-2009 global financial crisis. Without a coordinated strategy, the markets cannot be relied on to provide the employment base or drive the income growth that will be needed. Employment and taxation reform and formalizing the informal sector are the steps that need to be taken to provide social protection.

Sharing best practice is part of the solution, but it is not enough. We need action on best practice. We need a sense of urgency on employment from the G20 nations and from Rio+20 this year. Governments need to accept that sustainability is more than simply tackling environmental issues or financial issues, but about dealing with poverty, inequity and unemployment. This means jobs growth and social protection. We also need a new social contract, one that understands slower growth to be the new normal.

We are optimistic that governments will agree to an employment task force. This must be more than rhetoric. It must provide and act on a coordinated strategy that gives people hope and real opportunity.

On the flip side of risk, what opportunities do you see associated with this scenario?
There are huge opportunities, first, in managing our ageing societies. If we get the taxation systems right, if we formalize the informal sector, we can create a bigger tax base to deal with the questions of employment in the aged care industry.

The green economy represents another area of considerable opportunity. A 2% investment could drive between 10 and 20 million jobs in the short term. We need enabling legislation to unleash private sector investment. Investment in the green economy will do more than simply drive job growth. Economic growth must occur in a greener, more sustainable context. Every new job must be a greener job.

Genuine dialogue offers solutions to many of the problems we face. We must avoid the indignity of blaming others and look for cooperative strategies to enable everybody to move forward. At the heart of all of these issues, there are two ambitions: full employment and reducing inequity. These must drive our thinking as the basis of the new social contract to create sustainable growth in the framework of a greener economic environment.

We hear a lot of talk about the need for coordinated approaches, but what is it going to take to make real change?
This is a critical question. When the G20 emerged, many of us believed that a partnership between 20 nations that represented 75 to 80% of global GDP, the majority of the world’s population, and included both developed nations and significant booming emerging economies, would drive global economic governance and a coalition of leaders willing to act in the interest of securing a stable global economy.

I believe that is what we saw in London and Pittsburgh. We saw real, coordinated engagement from the leaders, meeting with a vision to fix the financial sector. Remember the promise that never again would the financial sector be in control of the real economy? They failed. They promised that quality jobs would be at the heart of the recovery. They failed. Now we have a second crisis. For those looking for a positive perspective, it is a second chance to get it right. People looked to Cannes for serious leadership. They will look to Mexico this year, but beyond that I believe the G20’s survival as a trusted international governance institution will depend on whether they are prepared to act.

Even though there is a responsibility for national development, without global governance, a cooperative approach to the future of the global economy, we are on a downward spiral, socially and economically, that it will take generations to pull out of.

Pictured: A demonstration against Greek austerity measures in in Athens (Reuters) 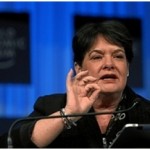