Does welfare make US unemployment worse?

The increased availability of unemployment compensation has been identified by many economists as an important source of the persistently high rates of unemployment. Evidence from recent work by Ghayad and Dickens (2012) confirmed that the increase in job openings relative to unemployment – depicted by the outward shift of the Beveridge curve – has taken place only among the long-term unemployed, suggesting a possible role for extended unemployment insurance benefits.

If part of the shift is explained by unemployed workers who are ineligible to collect benefits, then the Beveridge curve will not shift back to its pre-recession position when benefits for the long-term unemployed are discontinued.

In order to estimate which groups account for the breakdown in the vacancy and unemployment relationship, I decompose the recent deviation from the Beveridge curve into different parts, using data on job openings from the Job Openings and Labor Turnover Survey and unemployed persons by reason of unemployment obtained from the Current Population Survey.

The findings put an upward bound on the extent to which the increase in unemployment relative to job openings is due to reduced search effort caused by the extended availability of unemployment insurance. 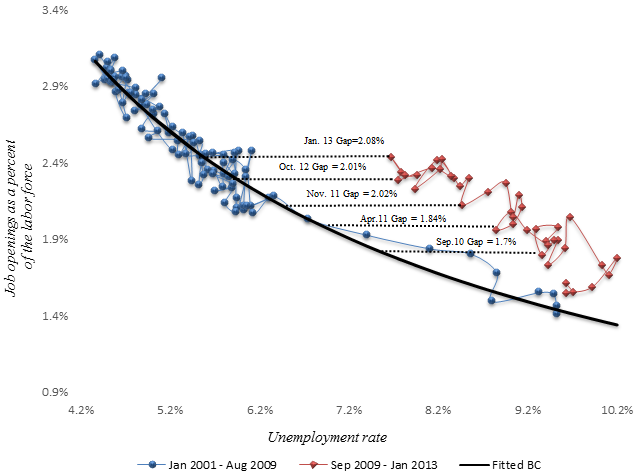 Notes: the blue dots are observations for 2001:m1–2009:m08. The red diamonds are the observations for 2009:m09–2013:m01. The black curve is a fitted estimation using data prior to September 2009. For a given job openings rate, the gap is calculated by measuring the deviation of the actual unemployment rate from that implied by the fitted curve.

The deviation of the points starting in September of 2009 from the stable Beveridge curve has been attributed by many economists to factors such as a rise in the mismatch between the skills of the unemployed and the skills desired by employers, or to the supplemental and extended unemployment insurance benefit programmes that were designed to attenuate the hardships of involuntary job losses over the course of the Great Recession.

Which groups are shifting the Beveridge curve?

There are many reasons why individuals become unemployed, and their experiences with unemployment vary widely. The Current Population Survey divides these myriad reasons into four major categories. People become unemployed because they either lose their previous job (job losers), quit their previous job voluntarily (job leavers), enter the labour force to look for work for the first time (new entrants), or re-enter the labour force after being out of it for a while (re-entrants).

Each of the two categories of the unemployed can be expressed as a proportion of the entire civilian labour force; the sum of the two rates thus equals the unemployment rate for all civilian workers.

In Figures 2 and 3 below, I fit empirical Beveridge curves for job leavers, new entrants, and re-entrants (Figure 2), as well as job losers (Figure 3). In each figure, I estimate the deviation in the unemployment rate of each group from its fitted curve for the period September 2009 onwards. A rough calculation suggests that job leavers, new entrants, and unemployed re-entrants – most of whom are not eligible for unemployment benefits – have contributed approximately 48.5% of the aggregate gap in January 2013, while job losers accounted for the remaining part during the same month. 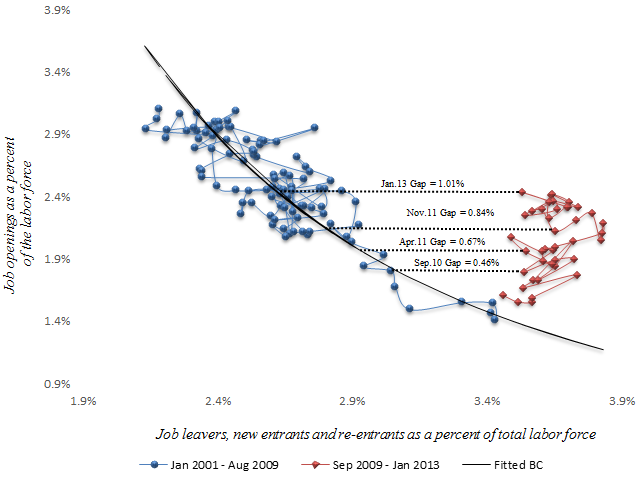 Notes: the graph plots the job openings rate versus the unemployment rate using job leavers, new entrants, and re-entrants. The blue dots are the observations for 2001:m1–2009:m09. The red diamonds are the observations for 2009:m09–2013:m01. Data are seasonally adjusted monthly rates. The black curve is a fitted estimation using data prior to September 2009. For a given job openings rate, the gap is calculated by measuring the deviation of the actual unemployment rate from that implied by the fitted curve. Notes: the graph plots the vacancy rate versus job losers as a fraction of the entire labour force. The blue dots are the observations for 2001:m1–2009:m08. The red diamonds are the observations for 2009:m09–2013:m01. Data are seasonally adjusted monthly rates. The black curve is a fitted estimation using data prior to September 2009. For a given vacancy rate, the gap is calculated by measuring the deviation of the actual unemployment rate from that implied by the fitted curve.

Exploration of the evolution of job openings and unemployment using recent data on unemployed persons decomposed by their reason for unemployment, which determines their eligibility to collect benefits, suggests that up to half of the increase in the unemployment rate relative to the fitted Beveridge curve is explained by job leavers, new entrants, and re-entrants – those who are ineligible to collect unemployment benefits.

Because unemployed job seekers who do not qualify to receive benefits compete for jobs with unemployed job losers who are eligible to collect unemployment insurance, an unattractive vacancy that is refused by a job loser is likely be grabbed quickly by a new entrant or unemployed re-entrant who is not subject to any incentive effects. However, the evidence from the decompositions suggests that the increase in the unemployment rate relative to job openings will persist when unemployment-benefit programmes expire.

This article first appeared in voxeu.org