Do cities widen the gap between rich and poor?

Thomas Piketty and the 2014 FIFA World Cup in Brazil have something in common. The bestseller of the former and the social unrest associated with the latter are two recent and vivid reminders of the salience and resurgence of income and wealth inequality.

Several explanations for increasing income inequality have been proposed, including skill-biased technological change brought about by computers and modern telecommunications, the expansion of global goods and labour markets, and changes in countries’ skill and age distributions. Yet one pattern has gone largely unnoticed: inequality is especially strong in large cities. At least one-quarter of the increase in earnings inequality in the US during 1979-2007 is explained by the high growth of earnings inequality in large urban areas (Baum-Snow and Pavan 2013).

In an age in which virtually all countries in the world are simultaneously experiencing unprecedented urbanization and sharply rising earnings inequality, the question of a link between the two patterns arises naturally. Are big cities merely the locus where income inequality is starkest, or are they host to economic mechanisms that explain (at least partly) that inequality?

Large cities are more unequal than the nations that host them. For example, income inequality in the New York Metro Area (MSA) is considerably higher than the US average and similar to that of Rwanda or Costa Rica. Large cities are also more unequal than smaller towns. Figure 1 plots the relationship between population size and the Gini index of income inequality for a 2007 cross-section of US MSAs (solid line). The relationship is clearly positive. This holds true even when considering that large cities host more educated people on average (dashed line); income inequality cannot be entirely explained by higher educational attainment in large cities. 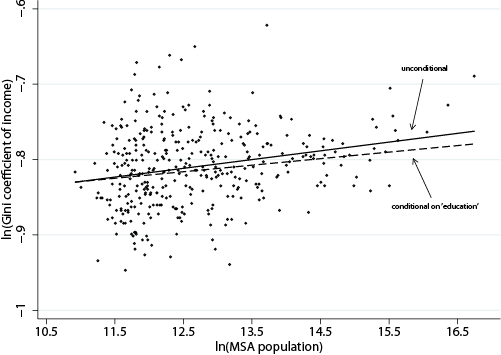 How can we then explain the size-inequality nexus? Researchers have proposed two main explanations so far, both of which have to do with city composition.

First, large cities may differ systematically in their industrial structure and the functions they perform. Large cities host, for example, more business services and the higher-order functions of finance and research and development (R&D), whereas small and medium-size cities host larger shares of lower-order services and manufacturing. Consequently, larger cities are more skilled. However, industry composition explains only about one-fifth of the observed skill variation across cities (Hendricks 2011). Furthermore, that variation cannot fully account for observed income inequality.

This is the second potential source of the positive relationship in Figure 1: returns to skill are increasing in city size (Wheeler 2001, Glaeser et al. 2008). Figure 2 illustrates this pattern. As can be clearly seen, while larger cities increase the income of everyone, the top 5% benefit substantially more than the bottom quintile. 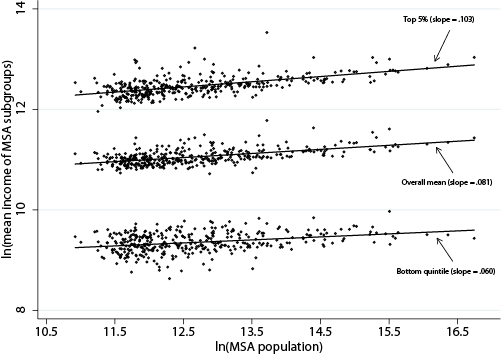 Superstars and ‘survival of the fittest’

In a recent study, we proposed a simple theory to explain why this happens (Behrens and Robert-Nicoud 2014). In our theory, large cities are places that disproportionately reward the most talented people (the superstars) and disproportionately fail the least talented (“selection”). In a nutshell, larger cities provide incentives for the most able to self-select into activities that offer high payoffs to the successful. However, the risk of failure associated with those activities also increases because workers in larger cities compete against more and better rivals.

Disproportionate rewards for the most skilled – and failure for the less skilled – then drives income inequality. Both channels are stronger in larger cities, thus establishing the positive link between city size and inequality, even when abstracting from differences in industry composition and educational attainment.

The theory also predicts that increasing globalization among the world’s cities will translate into larger urban income inequality. Just as large cities provide large local markets to reward skills, larger global markets serve the same function. One novel aspect of our analysis is to emphasize the existence of both a direct effect of increasing globalization on inequality (the superstar effect) and an indirect effect that goes through increasing urbanization and the growth of cities. Cities are more valuable in a globalized world, which may serve to explain increasing urbanization. The latter is positively linked to inequality, an aspect that has not been much analysed until now.

Urban winners take all: should we care?

What are the possible implications of our theory for public policy? The first motivation for our research is that cities are the correct spatial scale for looking at inequality. The reason is also sociological: people perceive inequality more strongly when they see it at close range. The spatial proximity of favelas and modern football stadiums in Brazil offers a striking contrast and has been hotly debated.

Second, as argued above, cities are not only where inequality materializes, but they are also hosts to mechanisms that contribute to changes in that inequality. As such, focusing on cities is of primary interest when it comes to designing policies that aim at reducing inequality and its adverse social effects.

We conclude with two words of caution. First, nominal income inequality (which is measured) is not equivalent to real income inequality (which is not directly measurable). Insofar as large cities offer a wider range of cheaper goods and services than small cities do, and if this pattern is especially pronounced for the least well off, then actual real urban inequality may be less severe than nominal inequality (Handbury and Weinstein 2011). Actually, Harvard economist Edward Glaeser claims that the large poverty rates of central cities are a testimony of their success, not their failure: they attract poor households by catering better to their needs (Glaeser 2011).

Second, fighting (urban) inequality does not require aggressive local redistributive policies, for such policies attract the poor and repulse the rich, leading to the bankruptcy of local governments, such as the fiscal crisis that hit New York City in the 1970s. State-wide or nationwide policy coordination is required.