China’s paradox: unemployment, and a lack of workers

In China, both a labour shortage and unemployment have emerged as problems in recent years. The number of university students scheduled to have graduated in June 2014 is 7.27 million, increasing by 280,000 from 2013 (MHRSS 2014). Following 2013 – at the time considered the most difficult year for job seekers in history – 2014 is expected to be even harsher. Problems in the labour market in China, which is a key region for Japanese companies advancing overseas, are also attracting attention in Japan. This paper provides a few perspectives on the Chinese labour market, which combines a labour shortage with challenges for job seekers.

High unemployment amid a labour shortage Although a nationwide labour survey did not include unemployment rates, we will look at the Chinese labour market using statistics from job placement services. According to the latest statistics on job offers and applications, as of the January-March quarter of 2014, there were 1.293 million young job seekers who graduated in the last year or earlier but had yet to find a job through employment agencies in 102 major cities (MHRSS 2014). As the population of these major cities accounts for approximately 46.7% of the total population of large and mid-size Chinese cities, we can estimate that the number of young job seekers who have graduated, but have yet to find a job, totals more than two million. Using data from the survey, I also tried to estimate the unemployment rate in those 102 major cities. I employed data on the working population in major cities and the number of job seekers who have not found employment (newly graduated unemployed persons and rural immigrant job seekers) based on the international standard set by the International Labour Organisation (see Figure 1). 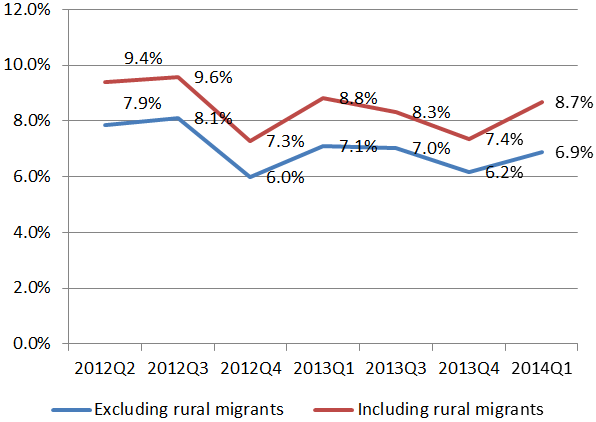 Source: Calculated by the author from statistics on job placement services in China (http://www.chinajob.gov.cn/).

The unemployment rate including rural migrants in major cities in the first quarter of 2014 is 8.7%, while that excluding them is 6.9%. Unemployment rates before the first quarter of 2014 are also close to these numbers, suggesting that the high unemployment rate has continued. The unemployment rate is high not because unemployed people lack the ability to work. Looking at the age distribution of all job seekers in these 102 major cities (of whom 96.0% are unemployed), workers aged 45 or younger account for 89.9% of the unemployed, indicating a large population of young workers. In addition, 54.7% of job seekers have specialist or vocational qualifications. Regarding the type of job, 44.1% of job seekers look for technical jobs, while 25.8% seek marketing, sales, or service jobs. There still exists abundant, high-quality labour in the Chinese labour market.

Job offers still buoyant The high unemployment rate cannot be blamed for the sluggish job offers. Despite the slower economic growth, job offers from companies are still buoyant. As indicated in Figure 2, the job-offers-to-seekers ratio in the first quarter of 2014 was 1.1, showing that there are still more job offers than job seekers. 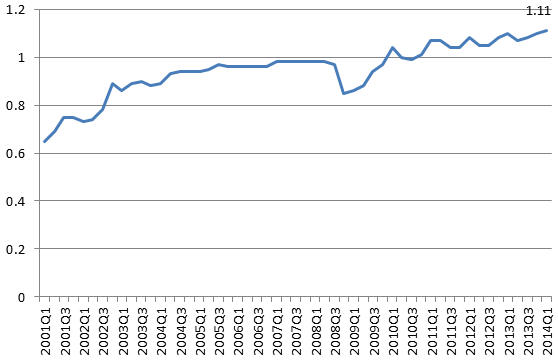 With regard to the buoyant job offers, I demonstrated in my recent book (Liu, 2013a) that labour productivity is the most persuasive of the factors that have an impact on the job-offers-to-seekers ratio in China. As shown in search theory, the larger the income earned from a job, the larger will be the rate of return gained from job creation for companies, which will result in more job offers. Given that productivity in developing countries will improve through not only technological innovations on their own but also through their efforts to catch up with developed nations, a higher rate of increase in productivity can be expected. For that reason, even if the economy slows down somewhat, buoyant job offers are likely to continue because of the support for higher productivity. 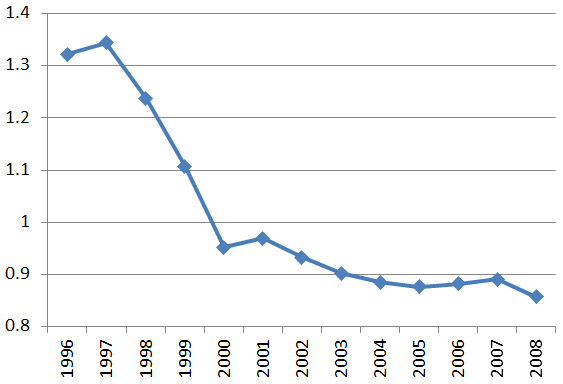 Favourable conditions for Japanese companies in China The main reason why Japanese companies invest overseas has already shifted from cheap labour to local demand for products. The “Survey of Overseas Business Activities” of the Ministry of Economy, Trade, and Industry (2014) shows that while the percentage of Japanese companies that place emphasis on cheap labour has fallen to 21.4%, the percentage of companies that value demand for products in a country which they have entered, and its three neighbouring countries, is 66.7% and 27.4%, respectively. The abundant university-educated labour force that exists in China despite the labour shortage appears to create favourable conditions for Japanese companies – emphasising the quality of human capital and innovation in an investment destination.

Image: Job seekers crowd to visit booths of companies as a security guard looks on at a job fair in Shenyang, Liaoning province. REUTERS/Sheng Li

Yang Liu, Visiting Researcher at the Institute of Social and Economic Research,

Survey: How US employees feel about a full return to the workplace

A survey showed that 4 in 10 Americans who are working from home would seek another job if employers asked for a full return to the workplace.

Is artificial intelligence ready for the great rehiring?