Governments around the world are spending lavishly on the construction of high-speed rail. China has invested $300 billion to roll out over 11,000 kilometers of high-speed rail track across the country. The state of California will spend almost $1 billion just to investigate the possibility of a high-speed train between San Francisco and Los Angeles. The UK is planning high-speed train connections between Manchester-Birmingham-Leeds and London. Japan’s famous Shinkansen high-speed rail network contains 2,387 kilometers of lines, carries 353 million passengers per year, and continues to be expanded to more remote parts of the country.

Governments and multilateral agencies allocate a sizeable fraction of their budgets to transport infrastructure projects. Despite of a large body of research (see the survey by Redding and Turner 2014), there is almost no evidence on how the arrival of high-speed trains (or transport infrastructure more generally) affects individual firm performance. Most work instead focuses on the location of economic activity and aggregate income and welfare. For example, Donaldson (forthcoming) examines the effects of railroads on income and welfare in India, while Duranton, Morrow and Turner (2013) consider the effects of interstate highways on the level and composition of trade for US cities.

Our research highlights a different role for infrastructure in improving firm productivity and performance (Bernard, Moxnes, and Saito 2014b). The installation of a high-speed rail link substantially reduces travel time, allowing firms to search more efficiently across locations for new and higher quality suppliers. The improvement and expansion of the supply network in turn reduces costs and improves measured productivity.

In spite of the widespread perception that firms’ success depends partly on their connections with suppliers and customers, relatively little work has been done on the structure, performance and importance of production networks. Even less is known about how geography and trade costs affect links in production networks. While there has been an explosion of research on social and economic networks and their formation, to date, little of that work has considered the supplier-customer relations between firms. Existing studies are often limited to a particular industry or geography within a country. We examine the importance of buyer-supplier relationships and the structure of a production network on firm performance and propose a novel explanation for variation in economic outcomes across regions.

Features of the Japanese production network

We use a comprehensive, unique dataset on the production network in Japan. The data provide supplier-customer links between firms for over 950,000 firms. These contain information on firm location, suppliers, customers and measures of performance. This set of firms accounts for the large majority of private sector economic activity in the country.

We develop a set of stylised facts about the Japanese production network to guide our modeling strategy (Bernard, Moxnes and Saito 2014a, b). Many of these facts are also present in cross-border firm-to-firm trade networks. Perhaps unsurprisingly, larger and more productive firms have more suppliers, and geographic proximity plays an important role in the matching of suppliers and customers. Most connections are local; the median distance to a supplier or customer is 30 kilometers. Larger firms not only have more suppliers, but also have (on average) suppliers that are farther away and of higher quality.

Unlike social networks, production networks display negative degree assortivity: the trading partners of well-connected firms tend to be less-well connected themselves. Consider two firms: (A) with many suppliers and (B) with few. The suppliers to the well-connected firm A will have on average relatively fewer customers, while the less-connected firm B will typically have suppliers with many customers. The negative degree assortivity in the Japanese production network is also found in exporter-importer networks in international trade (see Bernard, Moxnes and Ullveit-Moe 2013).

To guide our thinking about the relationship between the production network (suppliers) and firm performance, we build a parsimonious model of outsourcing with heterogeneous firms and heterogeneous locations. Downstream firms require tasks as inputs into the production process, such as materials processing, accounting, printing and distribution services. They can produce the tasks themselves or outsource them. Finding suppliers is costly, so it may not be profitable for all firms to outsource a given task. The most productive and profitable firms will be more likely to pay the costs to search for suppliers, especially for those in remote locations. Downstream firms can observe broad characteristics of potential upstream locations, i.e. average productivity and trade costs, but they need to expend resources to observe the prices (or quality) of individual tasks in a particular location. A higher-efficiency firm will search across more locations, source more inputs and have even better performance.

Infrastructure improvements reduce the costs of search. Lower search costs lead to more search, more outsourcing, and consequently higher sales and firm performance. These effects will be larger in input-intensive industries where the marginal benefit of finding better suppliers is greater. For the aggregate economy, locations with low trade and search costs will have higher performing firms, even if productivity is ex ante identical across all locations. Our framework offers a new supply-side microfoundation for why measured productivity varies widely across locations. 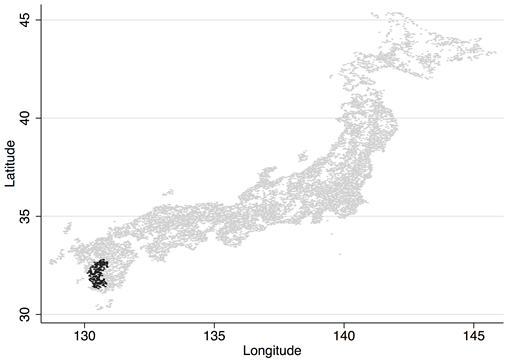 To examine the predictions of the model we use the 2004 opening of the southern portion of the high-speed rail lines in Japan (Kyushu Shinkansen) as a quasi-natural experiment. The new rail link lowered travel time between major cities by up to 75%. We examine whether firms near new Shinkansen stations improved their performance after the opening. Figure 1 shows localities near the new Shinkansen stations. We find that sales and measured productivity rose substantially for firms near the new stations after the opening. Firms in industries with greater purchased input shares outperformed firms in industries with lower purchased input shares.

Our research lies at the intersection of work on the determinants of domestic and foreign sourcing, the variation in economic activity across locations, and the role of geography in firm performance. The findings suggest an important role for enhanced transport infrastructure in facilitating face-to-face interactions and improved matching between suppliers and customers.

Authors: Andrew B. Bernard is the Jack Byrne Professor of International Economics at the Tuck School of Business at Dartmouth. Andreas Moxnes is an Assistant Professor of Economics at Dartmouth College. Yukiko Umeno Saito is a research fellow at the Research Institute of Economy, Trade and Industry, Japan since 2012, and was a researcher at the Fujitsu Research Institute, Japan from 2002 to 2012.

The number of job openings has hit a record high in the US. Here's why

Figures from the Bureau of Labor Statistics show a sharp rise in a job openings from April onwards, along with millions of Americans quitting their jobs.

How saying 'yes' and 'no' could revolutionize your work/life balance

This is what people love the most about working from home

This is what people love the most about working from home