Why now is the time to invest in infrastructure

Infrastructure is the backbone of well-functioning economies. Unfortunately, that backbone is becoming increasingly brittle in a number of advanced economies.

For example, there has been a decline in the overall quality of infrastructure in the United States and Germany (Figure 1; see the FT 2014 and ASCE 2013 for more on infrastructure in the U.S., and Der Speigel 2014 and Kunert and Link 2013 for Germany). In many emerging market and developing economies, the expansion of the backbone has not kept pace with the broader economy, and this is stunting the ability of these economies to grow. Our study—Chapter 3 in the October 2014 World Economic Outlook— examines the macroeconomic effects of public investment in a large number of countries and finds that in the current global environment of sub-par growth, there is a strong case for increasing public infrastructure investment in countries where conditions are right.

The evolution of the stock of public capital—the most widely available proxy for infrastructure—suggests rising inadequacies in infrastructure provision. Public capital has declined significantly as a share of output over the past three decades in both advanced and developing countries (Figure 2). In advanced economies, public investment was scaled back from about 4 percent of GDP in the 1980s to 3 percent of GDP at present (maintenance spending has also fallen, especially since the financial crisis). In emerging market and developing countries, sharply higher public investment in the late 1970s and early 1980s raised public capital stocks, but since then public capital relative to GDP has fallen. 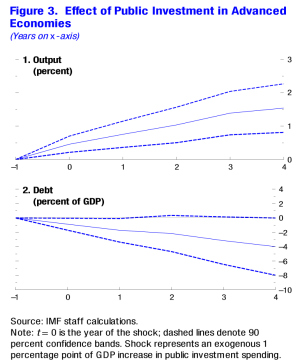 But the benefits depend on a number of factors. We find that the positive effects of increased public infrastructure investment are particularly strong if certain conditions are in place. In this context, current conditions present a golden opportunity to increase public infrastructure investment in countries with infrastructure needs. In many advanced economies there is still substantial economic slack and interest rates are at historic lows—which means a bigger bang for the buck for such investment.

Now is also a good time for many emerging market and developing countries to boost infrastructure investment. Many of these economies may not have the economic slack as in advanced economies, and their public investment processes tend to be less efficient. As a result, increased infrastructure investment may lead to a smaller boost to output, and may even come at the cost of higher public debt.  But if infrastructure bottlenecks have been constraining growth—which is the case in Brazil, India, the Philippines and South Africa, just to name a few—the gains are still likely to be large.

Clearly, the scope for investment and the efficiency of such investment differs across countries. However, our study finds that infrastructure investment can provide a powerful impetus for economic activity and jobs in countries.

So our bottom line?

Now is a good time to invest in infrastructure.  But invest well, where there is a clear need, and invest efficiently. Productive and efficient investment will provide a much-needed boost to output, both today and in the future.

Image: Construction labourers work at the site of the development project of King Abdullah Road in Riyadh February 5, 2013. REUTERS/Fahad Shadeed

Yes, ESG is complicated. Together, we can simplify it.

A coherent, comprehensive system of corporate disclosure is needed to ensure markets can understand risks and opportunities related to social and environmental issues.