An idea for the future of democracy

“It is not in the nature of governments to innovate”. That is what a representative from an international development agency said while listening to a presentation of the innovation agenda of a government from one of Mexico’s states. I cannot agree more.

Innovation means outperforming normative models, changing the status quo, disrupting everything from the way people behave to the way systems work. In order to innovate we have to experiment, iterate, learn from failures, dedicate time to test ideas, and understand that some will work, while many others will not. Innovation is difficult. It takes focus, openness, risk-taking and sometimes, a little bit of luck.

Traditionally the role of government is to provide stability and maintain the status quo. That is what makes it very difficult for governments to take risks in order to innovate. However, we’re living at a time when there is a growing recognition that the old ways of problem solving are not living up to new standards. Business as usual is not good enough.

Today, access to new tools to connect, generate and consume information is growing exponentially. In Mexico alone, for example, the number of people using the internet grew by 6 million in 2013, up 13% from the previous year.

The internet has become a sounding board that amplifies the voice of the people. If it does not amplify the capacity of the government to listen, then we risk having institutions that are disconnected from citizens. Demands have grown for a better education system, better and more efficient services, more security, and less corruption. These demands are increasingly being voiced by organized citizens through new channels while new challenges also arise. Technology is moving very quickly and democracy is moving very slowly; that is why we need to rethink structures.

We need to have a hacker mentality towards our institutions: understand them from the inside, pull them apart, and reformulate them in order to make them better. We should focus our efforts on transforming government from the inside to make it more entrepreneurial and citizen-centered. We need to build institutions that take advantage of the knowledge and innovation of their constituents in order to solve civic and social problems together. We need to foster change internally to create change externally. 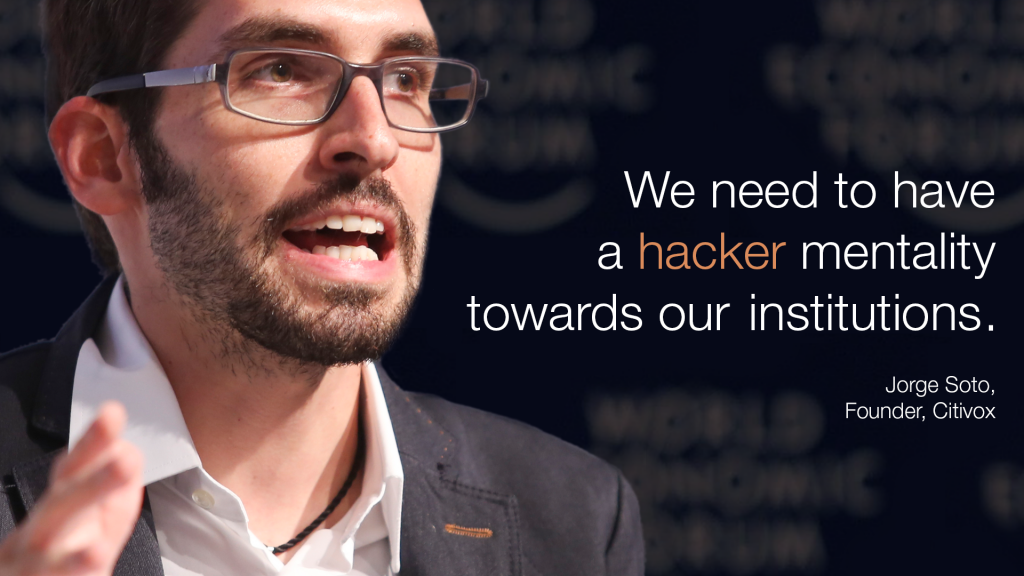 For the sake of fostering a more entrepreneurial and innovative government, we wondered what would happen if, inside government, we could create spaces or bubbles, where we stop and begin by thinking in problems rather than solutions, where government officials are allowed to go “off script” and come up with new ideas? What would happen if we team up the most innovative persons inside the government with the most innovative citizens outside the government and ask them to understand big problems together and come up with big solutions? If they are encouraged to ask many questions, to think freely, to put themselves in the shoes of their citizens and to prioritise long-term impact over short-term innovation?

Six months ago, the Coordination of the National Digital Strategy of Mexico launched a program called “Agentes de Innovacion” or “Innovation Agents”. The objective was to tackle five main public challenges through an open innovation and human-centered design approach, following these steps:

The first step was to identify an innovator inside the government and team him or her with an innovator outside the government, so two people from different backgrounds would focus on a single problem. Through a series of workshops they were asked to empathize with their constituents and then frame the problem they would be solving.

For example, at the beginning one team was trying to understand how to fix the long waiting times at the public hospitals and they made an appointment to get attended and waited there for several hours in line, missing a day at work. If we really want to frame a problem and propose a satisfying solution, we need to experience it.

All the teams are challenged not only to sift through Mexico’s major problems, but to propose different solutions, test them, discard them, validate them, build them and once they’ve nailed them, scale them up in order to find a long term solution that could positively impact millions of Mexicans.

The Agentes de Innovación program still has a few months to run and at this stage all five teams are building several prototypes and getting ready to test them with citizens. The challenges to be tackled through this program are:

The common trait of all the team’s processes so far is that you have to deconstruct complex challenges and examine their root causes. They cannot be addressed by governments alone, but require a multi-stakeholder approach. “Agentes de Innovación” is an attempt to democratize the way innovation can be used to solve public problems.

The difficulty of Mexico’s challenges is also a great opportunity to innovate. Technology alone will not solve the problems that we as a society have failed to solve. We all need to be part of the process of improving our democracy. Being a citizen is not a passive function, and slowly, spaces and opportunities like these will have to be replicated in different levels and sectors.

We should aim to build a government that understands that it cannot work if it’s either isolated from its citizens or simply running in parallel to them. Innovation and creativity come not only from the creation of new ideas, but also from the destruction of old paradigms.

Jorge Soto is the founder of companies including Citivox, Data4 and Miroculus, and a World Economic Forum Technology Pioneer and Global Shaper. He was formerly Deputy General Director of Civic Innovation of the Coordination of the National Digital Strategy in Mexico.

Image: A bulb hangs inside a restaurant in Madrid December 23, 2013.REUTERS/Andrea Comas.

6 expert essays on the future of biotech