Q&A: Towards the end of genetic disease?

Human bodies are not machines. But given how fast genetics is advancing, “fixing” ourselves might soon come to resemble exchanging faulty mechanical parts.

In October, two scientists shared the $3 million Breakthrough Prize in Life Sciences for inventing the CRISPR/Cas9 genome editing technology that might help us end genetic diseases, like Huntington’s – by taking cells out of a patient, fixing the damaged gene, and then putting the cell back in again.

The prize was jointly awarded to Jennifer Doudna, Professor of Chemistry and Molecular and Cell Biology at the University of California, Berkeley, and Emmanuelle Charpentier, professor at the Helmholtz Centre for Infection Research at Hannover Medical School, Germany.

This is an edited transcript of an interview with Professor Doudna.

Why is it important to fix or replace genes?

Over the last decade, there has been an explosion in genomics – we’ve had the human genome sequenced, and genome sequences of many other animals and plants. And this has meant that it is possible to read the code of life. We now have all the sequences of genes, including many that have mutations that lead to genetic disease.

The challenge has been that up until now it has been either difficult or impossible to act on this information. There have been no good technologies to manipulate genomes, to correct the genetic mutations that lead to disease. And that’s what the CRISPR/Cas9 technology does – it allows specific changes to be made in the DNA of cells and organisms to enable the correction of mutations that could otherwise lead to disease.

You can think about it like a computer code. The DNA of the cell is analogous to the code that programmes a computer. Imagine that you try to run the code, and there’s an error in it – then the computer doesn’t run very well. It’s the same in the cell of an organism. If there’s a mutation in the DNA, it affects the cell’s ability to grow and function normally. This results in genetic diseases like Cystic Fibrosis, Huntington’s Disease and Muscular Dystrophy.

CRISPR/Cas9 will have a profound impact on the development of therapeutic drugs to treat genetic diseases because it is a precision tool that allows us to study how drugs affect cells.

How did this idea appear in the first place?

CRISPR stands for “clustered regularly interspaced short palindromic repeats.”  It refers to a sequence pattern that occurs commonly in bacteria that was discovered by scientists who were sequencing lots of different bacterial genomes. They noticed this highly repetitive sequence that occurred in many bacteria. And what was remarkable is that many of these CRISPR sequences in bacteria include short sequences that come from viruses.

This was a clue that these CRISPR sequences might represent an immune system in bacteria and subsequent research showed that to be true. We were curious how they might protect bacteria from viral infections.

So how did you make a connection between bacteria and a genome-editing technology for humans?

We worked to determine the function of a particular protein called Cas9 that was known genetically to be an essential part of this CRISPR pathway in certain types of bacteria.

Our experiments showed that Cas9 is an RNA-programmed enzyme that has the ability to make cuts in DNA sequences that match a short piece of RNA bound to the protein. We figured out how to re-design this RNA-guided activity of Cas9 so it can be used to edit genes by creating a double-stranded DNA break at specific sites in the genome of a cell.

Importantly, plant and animal cells respond to a double-stranded DNA break by triggering repair enzymes to fix the break, and in the process, introduce changes to the DNA at the site of the break. This strategy can be used to replace a defective sequence with a new DNA strand.

With CRISPR/Cas9, are we now nearing the end of genetic diseases?

I think maybe the beginning of the end of genetic diseases. I started the Innovative Genomics Initiative (IGI), a joint UC Berkeley/UC San Francisco partnership, to help ensure that the CRISPR/Cas9 technology delivers on its promise to alleviate human disease and suffering, getting treatments into human trials as quickly as possible.

Researchers have long known that genetic mutation causes diseases like Muscular Dystrophy and Sickle Cell Anemia, but before CRISPR/Cas9 there were no simple or straightforward technologies to enable the correction of such genetic defects. Now that we have such a tool, there’s scope for a wide range of potential treatments. 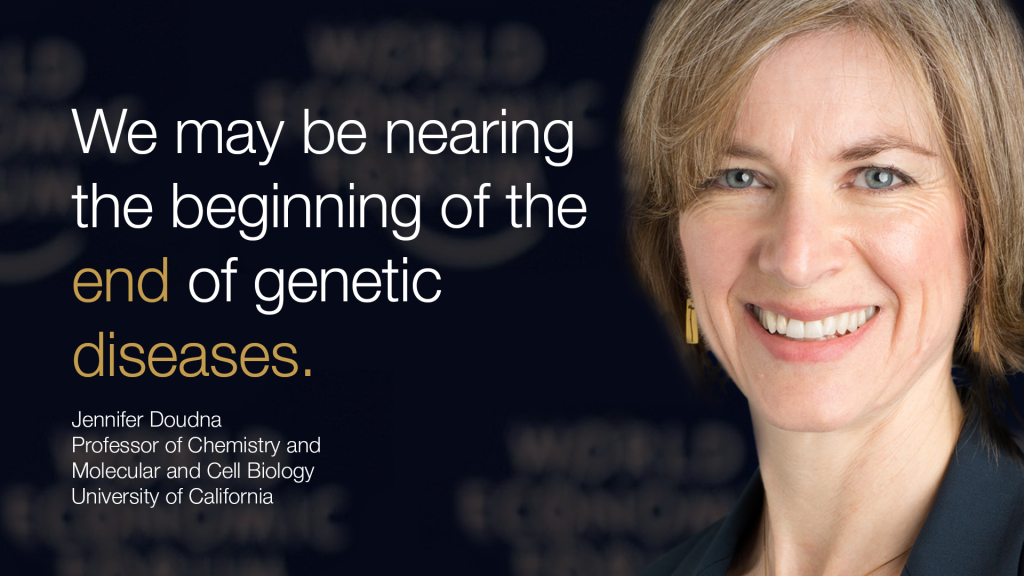 What genetic diseases are likely to disappear soon thanks to CRISPR/Cas9?

One of the most amazing aspects of CRISPR/Cas9 is that it is relatively simple to use. Anyone with basic molecular biology training can use the technology and apply it to research. That’s why we’ve launched the IGI lab, to fully leverage the West Coast spirit of innovation, and to start up multiple projects with the goal of speeding treatments to the public.

Diseases of the blood such as Sickle Cell Anemia are top targets for CRISPR/Cas9 treatments. In this case, a patient with a blood-based genetic disease will have blood stem cells removed, edited, expanded and then put back. The edited cells could then proliferate in the patient and provide a source of new, corrected blood cells.

Two others are diseases of either the liver or the eye, like cataracts and retinitis pigmentosa. These are organs where it is easier to introduce molecules like this into the cells that are affected.

How does CRISPR/Cas9 help biomedical researchers in terms of making some use of the Human Genome Project?

If the Human Genome Project mapped the genetic code, with Cas9 we’re re-writing it.

The Human Genome Project goes hand in hand with the CRISPR/Cas9 technology because having genetic sequence information for patients is critically important. In the not too distant future, when genome sequence costs have come down to the point where many people will have their genome sequenced, it will be common to know with accuracy what kinds of disease susceptibilities they might have.

How is CRISPR/Cas9 different from previous techniques for fixing genes?

There have been several technologies that are protein-based for doing genome engineering, like “zinc-finger nucleases” and “TALENs”. These involve engineering specific proteins with the ability to bind to particular DNA sequences in the genome and to introduce a double-stranded break in the DNA at that position. But a different protein must be engineered for each DNA sequence to be cut or corrected, requiring a lot of protein engineering and testing for a typical experiment.

With Cas9, the important difference is that the same protein works for any DNA site, because its specificity is determined by the RNA it binds to. Because the targeting capability is conferred by a short piece of RNA, this technology is easy to manipulate by simply changing the sequence of Cas9’s guide RNA.

This turns out to make this technology straightforward to use for many different kinds of genome editing experiments. Another key advantage is that by programming Cas9 with multiple different guide RNAs in the same cell, changes can be introduced at different sites in the genome of the same cell in one experiment. These properties make CRISPR/Cas9 an elegant and powerful technology.

Going back to the very beginning of your career, how did you get into science into the first place – and what do you think should be done to get more women into the field?

I grew up in Hawaii in a family of non-scientists. I was always interested in how things work. In 10th grade, my chemistry teacher was a young woman who was great at teaching students about what science really is, not about just memorising facts but about discovering how things work. I was very impressed with that. I thought I could see myself following in her footsteps. In college, I had the good fortune of working with a biochemistry professor – she set a great example of a woman who was successful in science and education. So having good mentors is critical.

My son is in 7th grade and I went to his school recently and gave a short presentation about our work. Many of the 12-year-old kids who came were girls, and this was an after school voluntary thing. After the presentation, many came up to me and told me that my presentation was very exciting, and it’s great that there are more women now pursuing the science and engineering fields. I think having more women go out and talk to young students and encourage them about this career is critical.

Interview by Katia Moskvitch for the World Economic Forum

Author: Jennifer Doudna is Professor of Chemistry and Molecular and Cell Biology at the University of California, Berkeley. She is attending our Annual Meeting 2015 in Davos, and is a panel member in the session attending Rewriting Human Genes, on 22/1 at 10.15am CET.

From buildings to cars to neighbourhoods, clean energy solutions are emerging from urban innovation projects with the potential for global scalability.

Which are the best countries in the world for entrepreneurs in 2022?

8 technology trends for innovative leaders in a post-pandemic world