Think the aid system can cope? It can’t

Over the past decade, a chorus of experts has warned that the world’s humanitarian aid system is fast approaching its limits.

After the many terrible crises of the past three years, we have now surpassed that breaking point. The international humanitarian community no longer has the capacity to respond. Multiplying and protracted conflicts, growing environmental disasters and failed states are trapping millions of people in an accelerating cycle of crises.

UNHCR has never had to address so much human misery in its 64-year history. At the end of 2013, more than 51 million people were uprooted from their homes due to conflict and persecution. The numbers are not yet in for 2014, but there will be many more. And with every year that passes, more people are spending a longer time in exile, and taking longer to recover.

Today’s humanitarian emergencies are beyond anything we have experienced in living memory. Unless we urgently change the way we tackle them, the world will become an increasingly difficult place to live for millions of people who have already lost almost everything. 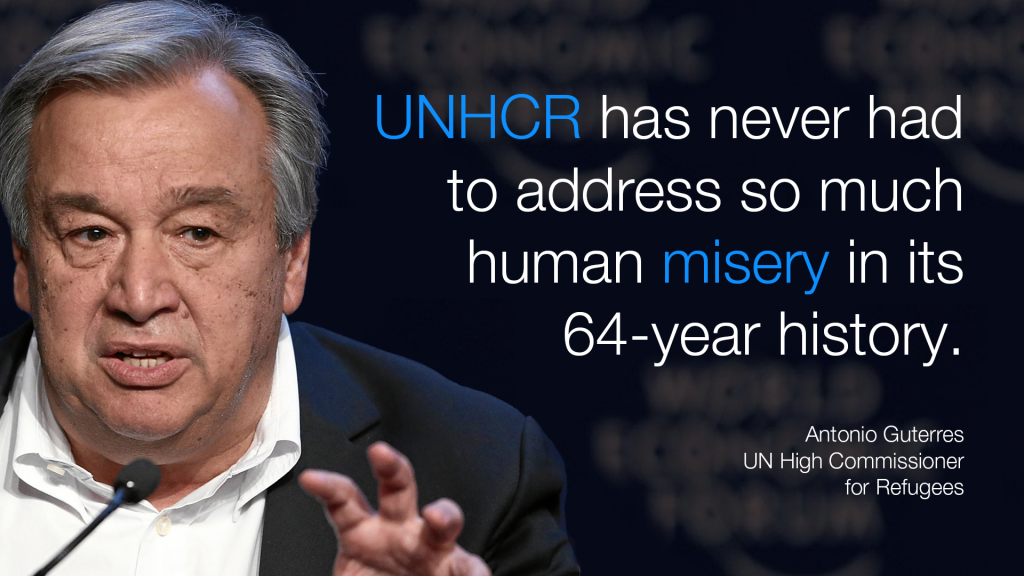 In the countries neighbouring Syria, the refugee situation has taken on a dimension beyond any I have previously encountered. Host communities and public services have been brought to their knees by an influx of people. More than a quarter of the population of Lebanon – a small country, beset by its own internal difficulties – is now Syrian. Here, like in Jordan and Turkey, local people face financial ruin, as rents and prices are skyrocketing, salaries falling and employment becoming increasingly scarce as a result of the Syria crisis.

In mid-December, the United Nations launched an appeal for $8.4 billion to assist 18 million people in and around Syria, underlining the spiralling effect of the crisis on the entire region. The appeal reflects a strategic shift, in which we aim to bring together humanitarian assistance with longer-term programmes to boost the economies of the region. But even so, if we are honest with ourselves, it still only covers the basics of what people need to survive, pick up the pieces, and start to rebuild.

And if previous appeals are any guide, there is a significant risk that even this minimum will be substantially underfunded. Last year’s Regional Refugee Appeal for Syria received only 59% of what was needed, and that was far from the lowest of the many international crises we face. According to UN figures, no appeal got more than 75%, and several struggled to raise even a third.

So how do we break through this vicious cycle? The challenge is manifold. First, we need to start admitting the full scale of what we are dealing with. The humanitarian aid system is built on a concept that when disaster strikes, outside agencies provide a temporary helping hand, until people can take back control of their own lives.

But across the world we see millions of people caught in semi-permanent crises. As each year goes by, they are less and less likely to break free. As populations continue to increase, and the climate continues to deteriorate, and as people flock in ever increasing numbers to large underdeveloped cities, the threat of multiple protracted mega-emergencies has become reality.

The aid architecture we built after the Second World War is no longer fit for purpose. And to that extent, Syria is the canary in the coalmine. Already the biggest humanitarian crisis of our era, it is a harbinger of potentially far worse to come. Unless we fix this system, things are going to get much, much more difficult.

In the case of refugees, we see a number of deeply worrying trends. As crises multiply around the world, some countries build up new barriers, making asylum more difficult to achieve. The harder it gets to seek refuge through legal channels, the more desperate people have to put their lives into the hands of unscrupulous smugglers to make it to safety. The number of people travelling in unsafe, overcrowded boats across the Mediterranean, the Indian Ocean or the Gulf of Aden has grown enormously, and over 4,200 have died this year alone.

At the same time, the neighbouring countries of those in crisis are being asked to shoulder an increasing portion of the burden. Today, almost nine out of ten refugees are living in developing countries – up from 70% a decade ago.

We need a new aid architecture that links support to refugees with far greater support for the communities who host them. This year’s Syria appeal takes a step in the right direction, but it is still only a drop in the ocean.

Global long-term development funding exceeds by eight times the limited humanitarian resources spread across the world’s crises. This development aid should also be made available to countries dealing with large refugee influxes – even if, as in the case of Lebanon and Jordan, they are considered to be middle-income, and therefore not normally eligible.

But this requires a cultural change in donor governments, agencies and international financial institutions, and a much wider base of support.

At present, the multilateral humanitarian system is built on three major pillars. Aid agencies, host populations and donors. Ultimately, taxpayers are footing the bill, and host communities are shouldering the burden.

This is no longer enough. In a world of tightening public budgets, and growing private wealth, business leaders must also become a major part of this picture. The squeezed middle classes of the West, and the desperate host communities of the neighbouring countries, are unable to pay for this alone. We need to initiate a massive scaling up of private sector involvement, both in terms of shared expertise and funding support.

There are many ways to do this. Direct contributions will remain essential. But there is also a huge role to play in providing opportunities for employment in host countries, to benefit both local people and refugee populations. To provide training and education, technology, and logistics. To offer hope, and a signal that our society’s winners are also willing to play their part in its long-term health.

If more private corporations invest and create local jobs, governments in refugee-hosting countries have indicated they would be ready to lift restrictions on refugee employment. Access to livelihoods helps break the vicious cycle of underfunded humanitarian appeals, increases self-reliance and helps create the skills that sow the seeds for an eventual rebuilding back home.

In other words, there are solutions on offer. In a world where the latest app can sell for billions of dollars, there are plenty of ways to provide a minimum of humanity for those caught in conflict, who never had the opportunity to reach their potential in the first place. As a global society, we have the technology, resources and the know-how to make a massive difference to living standards everywhere, including for refugees.

But this will not happen until the private sector steps up and becomes not just a bit player, but a driving force in fixing the global emergency that is upon us. Syria has left no doubt that the old approach no longer works. It’s time to get serious about building a new one.