What caused the last housing boom?

The Global Crisis precipitated the worst US recession since the Great Depression. The spectacular rise in house prices and household debt during the first half of the 2000s, which is illustrated in Figures 1 and 2, was a crucial factor behind these events. Yet, economists disagree on the fundamental causes of this credit and housing boom. 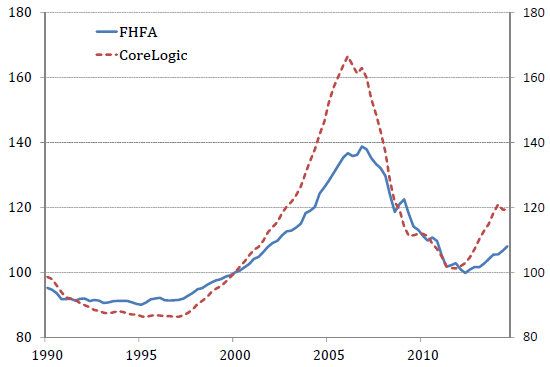 Notes: FHFA is the all-transactions house price index from the Federal Housing and Financing Agency. CoreLogic is the repeated sales national house price index produced by CoreLogic. Both indexes are deflated by the headline consumer price index, and normalized to 100 in 2000Q1.

Notes: Household mortgages are nominal home mortgages from the balance sheet of households and nonprofit organizations in the Flow of Funds. GDP is in current prices from the NIPA tables.

The most common narrative in the macroeconomic literature attributes the surge in debt and house prices to a progressive loosening of collateral requirements for mortgage borrowers, such as those brought about by the diffusion of mortgages with higher initial loan-to-value (LTV) ratios, of multiple mortgages on the same property, and of home equity lines of credit.

Several recent papers use quantitative general equilibrium models to explore the implications of these less stringent collateral requirements for house prices and other macroeconomic outcomes (e.g. Favilukis et al. 2013, Bianchi et al. 2012, Boz and Mendoza 2014, Garriga et al. 2012). In all of these models, a collateral constraint limits households’ ability to borrow to a fraction of the value of their real estate. When this maximum loan-to-value ratio is relaxed, households can increase their leverage and borrow more. As a result, the demand for both credit and housing increases, boosting home prices.

There is little doubt that during the boom collateral requirements became looser, at least for certain borrowers, as documented for instance by Duca et al. (2011), Favilukis et al. (2013), and Geanakoplos (2010). But can higher loan-to-value ratios account qualitatively and quantitatively for the unprecedented increase in house prices and debt, while remaining consistent with other macroeconomic developments during the same period?

Two facts suggest that the answer to this question is no.

In the data, however, household debt and real estate values rose in tandem, leaving their ratio roughly unchanged over the first half of the 2000s, as shown in Figure 3. In fact, this ratio only spiked when home prices tumbled starting in 2006.

Therefore, interest rates must rise to convince the lenders to supply the additional funds demanded by the now less constrained borrowers. In the data, however, real mortgage interest rates fell during the 2000s, as shown in Figure 4.

The fall in mortgage interest rates depicted in Figure 4 points to a shift in credit supply as a straightforward alternative explanation of the credit and housing boom of the early 2000s. We develop this hypothesis within a simple general equilibrium model in Justiniano et al. (2015).

In the model, both borrowing and lending are subject to a friction. On the borrowing side, this friction takes the form of a collateral constraint, as in the rest of the literature. Therefore, changes to this constraint, such as those due to a higher maximum loan-to-value ratio, shift the demand for credit. On the lending side, we model the friction as a limit to the amount of funds that savers can direct towards mortgage finance. This simple lending constraint is equivalent to a leverage restriction on financial intermediaries, along the lines of Brunnermeier and Sannikov (2014) and He and Krishnamurthy (2013). Changes to this constraint then act as credit supply shifters.

Lending constraints, which are the main novel feature of our framework, are a simple modelling device to capture a host of technological and institutional factors that restrain the flow of savings into the mortgage market. Starting in the late 1990s, the explosion of securitisation and of market-based financial intermediation, together with changes in the regulatory environment, lowered many of these barriers, increasing the supply of mortgage credit.

Among the sources of looser lending constraints, the pooling and tranching of mortgages into mortgage-backed securities (MBS) plays a central role through several channels.

These assets can then be purchased by those institutional investors that are restricted by regulation to only hold fixed-income securities with high ratings. As a result, the boom in securitisation contributed to channel into mortgages a large pool of savings that had previously been directed towards other safe assets, such as government bonds (Brunnermeier 2009).

Combined with the rise of off-balance-sheet vehicles, this form of ‘regulatory arbitrage’ allowed banks to increase leverage without raising new capital, expanding their ability to supply credit to mortgage markets (Acharya and Richardson 2009, Acharya et al. 2013).

International factors also played an important role in increasing the supply of funds available to American home buyers, as a ‘glut’ of global savings flowed towards US safe assets, including agency mortgage-backed-securities (Bernanke et al. 2011).

Figure 5 plots the effects of a relaxation of lending constraints in a calibrated version of our model. When savers and financial institutions are less restricted in their lending, the supply of credit increases and interest rates fall. Since access to credit requires collateral, the increased availability of funds at lower interest rates makes the existing collateral—houses—scarcer and hence more valuable. As a result of higher real estate values, borrowers can increase their debt, even though their debt-to-collateral ratio remains unchanged. Quantitatively, the responses of debt, house prices, aggregate leverage and mortgage rates reported in Figure 5 match well the empirical facts illustrated in Figure 1 through 4.

Figure 5. Response to a change in the lending limit

Notes: Response of key macroeconomic variables to a relaxation of the lending constraint, in the calibrated model of Justiniano et al. (2015).

In this column, we argued that any reconstruction of the fundamental causes of the housing and credit boom that preceded the Great Recession must be consistent with four stylised facts: house prices and debt surged, the ratio of debt to house values was roughly constant, and real mortgage rates fell. From the perspective of these four facts, explanations that rely exclusively on an increase in credit demand associated with more generous credit conditions—for instance in the form of higher loan-to-value ratios—are lacking. On the contrary, a shift in credit supply associated with the emergence of securitisation and shadow banking, is qualitatively and quantitatively consistent with the four facts.

This interpretation of the macroeconomic facts has the additional merit of being consistent with the micro-econometric evidence of Mian and Sufi (2009 and 2010). They show that an expansion in credit supply was the fundamental driver of the surge in household debt, and that borrowing against the increased value of real estate accounts for a significant fraction of this build-up in debt.

Shifting the focus of the inquiry into the causes of the boom from credit demand to credit supply has potentially important implications for the study of macro-prudential policy, since much of the literature on this topic has tended to model the boom as stemming from looser borrowing constraints. Exploring the normative implications of the alternative view proposed in this article is an exciting avenue for future research.

Bernanke, B, C Bertaut, L Pounder DeMarco, and S Kamin (2011), “International capital flows and the returns to safe assets in the United States, 2003-2007”, International Finance Discussion Papers 1014, Board of Governors of the Federal Reserve System (U.S.).

Authors: Alejandro Justiniano is a Senior Economist and Research Advisor in the Macroeconomics group at the Federal Reserve Bank of Chicago. Giorgio Primiceri is an Associate Professor of Economics at Northwestern University. Andrea Tambalotti is an Assistant Vice President and Function Head in the Macroeconomic and Monetary Studies Function at the Federal Reserve Bank of New York.

More on Real Estate View all

Various places around the world have begun to embrace the 15-minute city, but the model risks excluding disadvantaged communities

The transition to an electrified world will require a transformation of the buildings where we live and work and a huge investment in clean energy.