Additive manufacturing is one of 10 emerging technologies of 2015 highlighted by the World Economic Forum’s Meta-Council on Emerging Technologies.

As the name suggests, additive manufacturing is the opposite of subtractive manufacturing. The latter is how manufacturing has traditionally been done: starting with a larger piece of material (wood, metal, stone, etc), layers are removed, or subtracted, to leave the desired shape. Additive manufacturing instead starts with loose material, either liquid or powder, and then builds it into a three-dimensional shape using a digital template.

3D products can be highly customized to the end user, unlike mass-produced manufactured goods. An example is the company Invisalign, which uses computer imaging of customers’ teeth to make near-invisible braces tailored to their mouths. Other medical applications are taking 3D printing in a more biological direction: by directly printing human cells, it is now possible to create living tissues that may find potential application in drug safety screening and, ultimately, tissue repair and regeneration. An early example of this bioprinting is Organovo’s printed liver-cell layers, which are aimed at drug testing, and may eventually be used to create transplant organs. Bioprinting has already been used to generate skin and bone, as well as heart and vascular tissue, which offer huge potential in future personalized medicine. 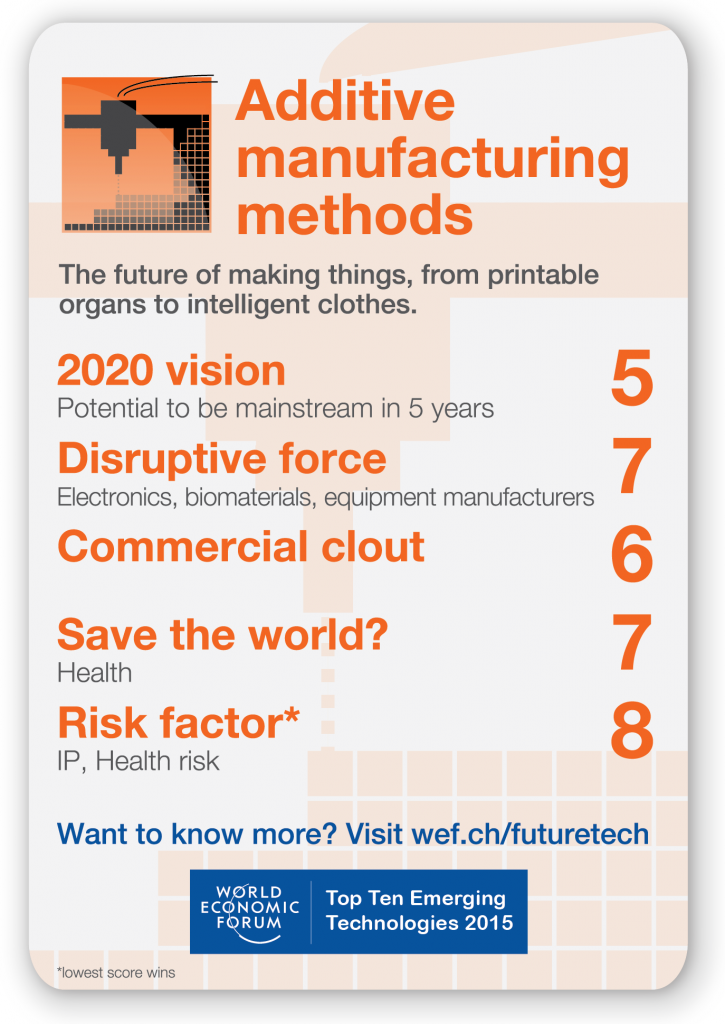 An important next stage in additive manufacturing would be the 3D printing of integrated electronic components, such as circuit boards. Nano-scale computer parts, like processors, are difficult to manufacture this way because of the challenges of combining electronic components with others made from multiple different materials. 4D printing now promises to bring in a new generation of products that can alter themselves in response to environmental changes, such as heat and humidity. This could be useful in clothes or footwear, for example, as well as in healthcare products, such as implants designed to change in the human body.

Like distributed manufacturing, additive manufacturing is potentially highly disruptive to conventional processes and supply chains. But it remains a nascent technology today, with applications mainly in the automotive, aerospace and medical sectors. Rapid growth is expected over the next decade as more opportunities emerge and innovation in this technology brings it closer to the mass market.

Discover the other emerging technologies on the 2015 list:
Sense and avoid drones
Distributed manufacturing
Digital genome
Computer chips that mimic the human brain
Zero-emission cars
Computers that learn on the job
Precise genetic engineering
A new kind of plastic to cut landfill waste
Next generation robotics

This world map depicts population density by latitude. It is seen that the population becomes more concentrated closer to the equator.

Here are seven books by the Schwab Foundation's social innovators to inspire the changemaker in you.

There is great value in giving feedback, and research shows that people want to hear it