Precise genetic-engineering techniques are one of 10 emerging technologies of 2015 highlighted by the World Economic Forum’s Meta-Council on Emerging Technologies.

Conventional genetic engineering has long caused controversy. However, new techniques are emerging that allow us to directly “edit” the genetic code of plants to make them, for example, more nutritious or better able to cope with a changing climate.

Currently, the genetic engineering of crops relies on the bacterium agrobacterium tumefaciens to transfer desired DNA into the target genome. The technique is proven and reliable, and despite widespread public fears, there is a consensus in the scientific community that genetically modifying organisms using this technique is no more risky than modifying them using conventional breeding. However, while agrobacterium is useful, more precise and varied genome-editing techniques have been developed in recent years.

These include ZFNs, TALENS and, more recently, the CRISPR-Cas9 system, which evolved in bacteria as a defence mechanism against viruses. CRISPR-Cas9 system uses an RNA molecule to target DNA, cutting to a known, user-selected sequence in the target genome. This can disable an unwanted gene or modify it in a way that is functionally indistinguishable from a natural mutation. Using “homologous recombination”, CRISPR can also be used to insert new DNA sequences, or even whole genes, into the genome in a precise way. 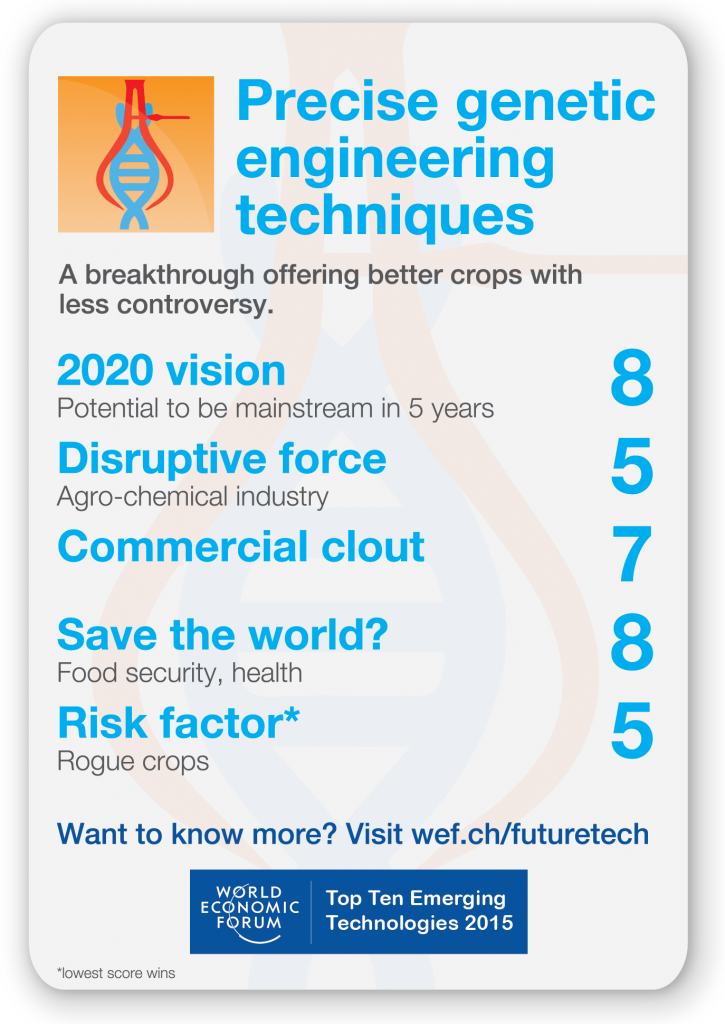 Another aspect of genetic engineering that appears poised for a major advance is the use of RNA interference (RNAi) in crops. RNAi is effective against viruses and fungal pathogens, and can also protect plants against insect pests, reducing the need for chemical pesticides. Viral genes have been used to protect papaya plants against the ringspot virus, for example, with no sign of resistance evolving in over a decade of use in Hawaii. RNAi may also benefit major staple-food crops, protecting wheat against stem rust, rice against blast, potato against blight and banana against fusarium wilt.

Many of these innovations will be particularly beneficial to smaller farmers in developing countries. As such, genetic engineering may become less controversial, as people recognize its effectiveness at boosting the incomes and improving the diets of millions of people. In addition, more precise genome editing may allay public fears, especially if the resulting plant or animal is not considered transgenic because no foreign genetic material is introduced.

Taken together, these techniques promise to advance agricultural sustainability by reducing input use in multiple areas, from water and land to fertilizer, while also helping crops to adapt to climate change.

Discover the other emerging technologies on the 2015 list:
Sense and avoid drones
Distributed manufacturing
Digital genome
Additive manufacturing
Computer chips that mimic the human brain
Zero-emission cars
Computers that learn on the job
A new kind of plastic to cut landfill waste
Next generation robotics

Image: Young lettuce plants poke through holes cut in the foam lids of a hydroponic growing bed in a greenhouse, where the Chester County Food Bank grows seedlings and produce, on the Springton Manor Farm in suburban Philadelphia, Pennsylvania November 21, 2013. REUTERS/Tom Mihalek

A new study shows that nations most affected by climate change are least likely to receive public funding for climate tech research.

This groundbreaking tattoo can indicate your blood oxygen levels

Researchers have created an implantable sensor that monitors blood oxygen levels by glowing in the light. It could help patients track chronic conditions.

Feel the metaverse with your bare hands – using ultrasonic waves