How can advanced economies jumpstart growth?

Global growth remains anemic more than five years after the global financial crisis. If nothing is done, the prospect of settling into a “new mediocre” will become reality, especially in advanced economies.

In many advanced economies, accommodative monetary policies, growth-friendly fiscal frameworks, and efforts to tackle private debt overhang and improve tax revenues and compliance are essential to lift economic growth in the short term.

To jumpstart and sustain growth over the longer-term, reforms to strengthen labor force participation, raise productivity by removing impediments to efficient allocation of resources, encourage competition, and encourage innovation and technology-uptake are crucial. The key question is how to identify, prioritize, and calibrate the reforms that best suit each country’s situation.

We look closely at what can be done to boost potential growth in a new study that examines trends in productivity and labor and capital inputs in different sectors and across countries.

Problem started before the crisis

Continued sluggish growth in advanced economies partly reflects the scale of the public and private balance sheet damage that occurred during the crisis and the slow process of shedding debt since then.

But the underlying output and productivity growth in most advanced economies had, in fact, already been slowing well before the global financial crisis (Figure 1). This trend may have been masked by the ups and downs of the financial cycle, along with some productivity bursts driven by technology and reforms before the crisis. 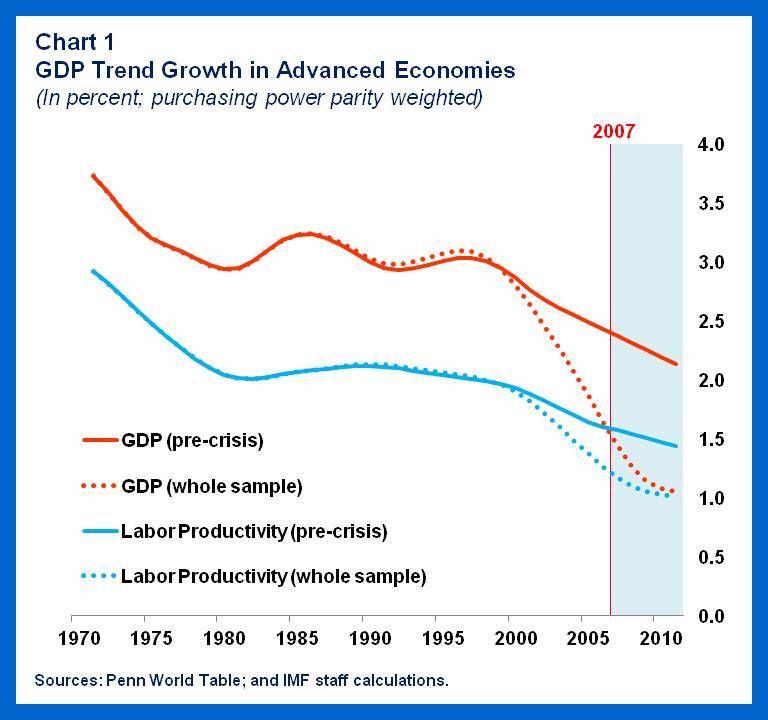 To boost jobs and growth, we at the IMF have advocated measures to increase labor force participation, especially by increasing economic opportunities for women (seehere). More broadly, the slowdown in productivity even prior to the crisis puts a high premium on reforms in labor and product markets, increasing infrastructure investment, and incentivizing innovation and skills development. Heavily-subsidized agricultural sectors, policies affecting the size of retail establishments in Japan, or employment protection policies in Italy and France that only take effect beyond a certain size threshold are all examples of distortions that induce a misallocation of capital and labor in advanced economies.

Our analysis shows that the agriculture and personal services sectors have the most distortions in advanced economies, possibly reflecting the effect of subsidies, preferential policies, and the lack of competition due to entry barriers.

Reforming product and labor markets could lead to a better allocation of productive inputs across sectors and sizable increases in growth (Figure 2). For example, if Italy and Portugal were to eliminate distortions within the next decade, they could boost productivity growth by at least 1½–2 percent per annum. Figure 3 presents the number of identified reforms per country. While large infrastructure shocks that took place mainly in the 1970s have since waned, product market reforms saw a spurt in the 1990s and continued at a similar pace in the 2000s. Labor market reforms, as measured by a reduction in job protection or a reduction in the labor tax wedge—the percentage of taxes and transfers paid in the share of total labor costs– have been less frequent. The frequency of positive information and communications technology “shocks” or significant increase in the uptake of such technology by different sectors increased since the 1970s but slowed on the eve of the crisis. 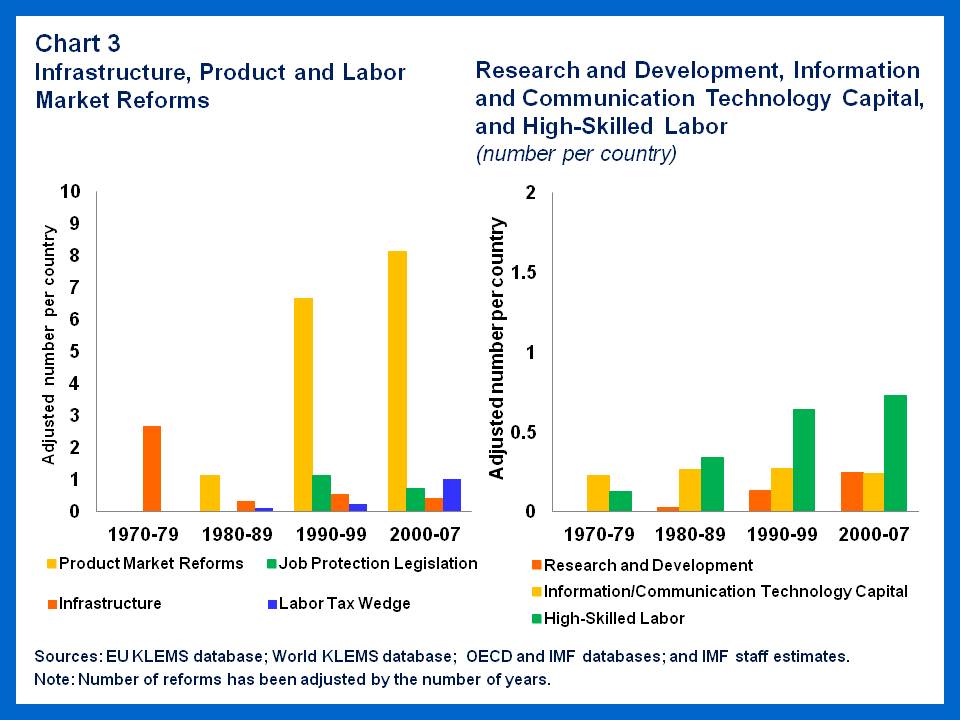 Our analysis also finds that advanced economies must boost the productive capacity of their workforces, make needed investments in physical and information and communications technology infrastructure, and encourage innovation. Removing binding product and labor market rigidities that impede resource allocation within the most dynamic sectors and firms is crucial to boosting productivity. So is augmenting human capital, including reducing skills gaps, and improving the quality of education.

The productivity payoffs of such reforms vary across sectors and are typically larger the closer the sector is to the technological frontier. The dividends from such reforms also differ over time.

So, what are the main takeaways for policymakers?

Go back to basics. Innovation and investments in equipment, information and communications technology, and new ideas can yield high returns, especially in the most technologically advanced countries such as the United States and Germany. These efforts can also generate large global technological spillovers that benefit other countries.

Make services reform a priority. Countries can realize significant payoffs with product market reforms. If Italy were to reduce its services sector regulations to bring them in line with those of the Netherlands, for example, the average total factor productivity growth gain across all industries could amount to about 0.1 percentage point a year, and about 0.4 percentage point in the services sector.

Invest in infrastructure. Investments in transport, energy, and telecommunications are essential to improving productivity, boosting employment, and increasing output. Because they tend to be large-scale and long-term, these investments require high levels of coordination to maximize the wider benefits to society as a whole. In many cases, governments will need to play a vital role in planning, delivering, and financing these projects. At present, debt-financed projects could have large productivity and output effects, particularly if clearly identified infrastructure needs are met through efficient investment.

Calibrate reforms. Changes in economic structures during the reform process can have short-term costs in terms of employment and growth. Where demand is weak, investment efficiency is high, and there is slack in the labor market, product market reforms and increased investment in productive infrastructure could be prioritized to reap immediate employment and output benefits.