A simple way to encourage saving among the poor

Recent studies in development economics have underlined the disappointing results of microcredit programmes.1 The focus has now shifted towards other financial products, such as savings. The substantial demand for savings among the poor has been reflected in their willingness to invest in risky assets, such as jewellery, animals, money under the mattress, and different forms of informal savings arrangements. Therefore, it is important to provide poor households access to products of higher quality, such as bank accounts.

Several governments made financial inclusion a policy priority, which led to a rapid increase in bank account penetration in developing countries. Among others, the government of South Africa launched the Mzansi initiative in 2004, the Colombian government created Banca de las Oportunidades in 2006, and the Indian government announced Pradhan mantri Mantri Jan-Dhan Yojana in 2014.2,3 Thanks to the latter scheme, almost 137 million accounts were opened over the past 8 months. It is now estimated that 99% of the households have access to a bank account in India. However, 67.3% of those accounts are dormant.4 These figures are in line with what researchers, investigating the impact of providing formal bank accounts to the poor observed (Ashraf et al. 2006, 2010, Dupas and Robinson 2013a, b). These papers show large take-up rates, but a rather low usage. For instance, Dupas and Robinson (2013a) offered bank accounts to Kenyan micro-entrepreneurs. While 87% took up the account, only 41% made at least one transaction within the first six months. In a similar experiment, Dupas et al. (2012) find a 62% take-up rate, but only an 18% usage rate, even when leniently defining active usage as making at least two deposits a year. Karlan et al. (2014) emphasise that the gap between take-up and usage of formal bank accounts remains to be explained.

As for other savings products, bank account use requires an active decision to save (deposit), and therefore some self-control. This might be an important barrier. In high-income countries, products such as automatic transfers have been designed that overcome the need of an active savings decision. For example, when employees faced an automatic enrolment option to 401(k) savings plans in the US, both the participation and the savings rates were higher (Madrian and Shea 2001). In developing economies where most economic transactions are settled in cash, direct transfers on a bank account could bring about similar results. When paid on the account, the money is saved by default, while – as long as payments are done in cash – the money is ready to be spent. We tested this hypothesis in rural India by estimating how changes in the payment method affect consumption and savings (Somville and Vandewalle 2015).

Moving from cash to account based payments triggers savings

We collaborated with Basix Sub-K, an NGO providing banking services on behalf of a bank. They select and train one shop owner per village to become the local banker. Villagers can go to the banker to open a bank account, deposit, withdraw, make transfers, or check their balance.

We sampled 442 villagers in 17 villages in Chhattisgarh. All of them either had an account, or were assisted in opening one. Following a baseline survey, we organised practical information sessions for all the participants. We showed them how to deposit and withdraw, and demonstrated the importance of a fingerprint recognition tool that protects their account. From February till May 2014, we hired a centrally located room in each village, where we interviewed the participants on a weekly basis for a total of 7 to 13 weeks. We gathered detailed information on the evolution of the various earnings and expenditures of the household members over the past 7 days. The respondents were paid 150 rupees for each interview, and randomly allocated to being paid on the account (treated) or in cash (control). They were free to deposit or withdraw the amount they want, the transaction costs were negligible, and the bank was located at their doorstep. The only cost was the couple of minutes it takes to perform a transaction.

This simple change in the payment method led to a tremendous difference in savings and consumption patterns. Our results can be summarised as follows.

Finally, the effects are uniform across different sub-samples. The treatment has similar effects on men and women, and on old and new account holders, two characteristics on which we had stratified our sample.

Our results provide evidence that account use and savings are easily enhanced by moving from cash to account based payments for a broad segment of the population. An important remaining question is whether individuals who are paid on the account develop the habit to save on that account. We tested this by twisting the original design. After a break of seven weeks, we did interviews for four extra weeks, but compensated everyone in cash. These extra weeks were not announced and could not have been anticipated by the respondents. We explicitly told them that the use of the accounts is the same, but that they have to make deposits themselves if they want to save on the account. During these weeks, the change in the account balance is the same for both groups. Furthermore, the treated and control no longer differ in terms of consumption patterns. 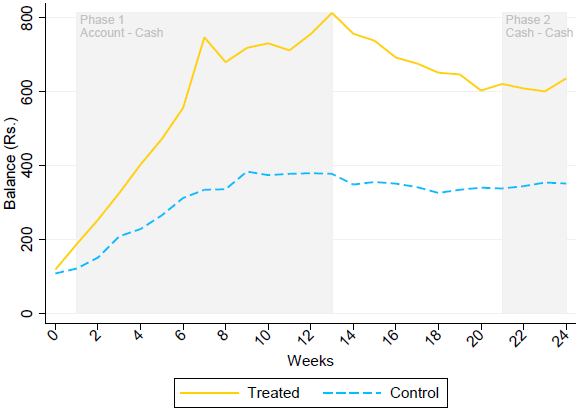 These findings are relevant for the design of financial inclusion policies. Existing studies show that the demand for bank accounts is high, but not sufficient to trigger an active use. We draw attention to the next step. Once private or public transfers are made on the account – instead of in cash – the account becomes truly active and savings are stimulated.

Image: A customer withdraws 500 Estonian kroon ($40) from an ATM in Tallinn. REUTERS/Ints Kalnins