What are the smartest goals for sustainable development?

Over the next 15 years, the international community will spend $2.5 trillion on development, with national budgets contributing countless trillions more. In September, the world’s 193 governments will meet at the United Nations in New York to agree on a set of global targets that will direct these resources. With so much at stake, it is vital that we make the smartest choices.

Because it is only natural for politicians to promise to do everything, the UN is currently poised to consider an impossibly inclusive 169 targets. The proposed targets range from the ambitious (“end the epidemics of AIDS, tuberculosis, and malaria”) to the peripheral (“promote sustainable tourism”) to the impossible (“by 2030 achieve full and productive employment and decent work for all women and men, including for young people and persons with disabilities”).

But promising everything to everyone provides no direction. In truth, having 169 priorities is like having none at all.
That is why my think tank, the Copenhagen Consensus, asked 82 of the world’s top economists, 44 sector experts, and UN organizations and NGOs to evaluate which targets would do the most good for every dollar, euro, or peso spent. A team of eminent economists, including several Nobel laureates, then prioritized these targets in value-for-money terms. 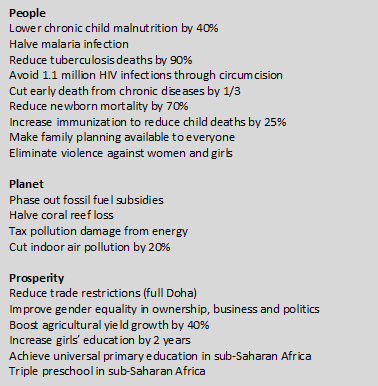 If the world were to spend money equally across all 169 UN targets, it would do about $7 of social good for each dollar spent. That is respectable, but we could do much better.

The panel of eminent economists has produced a much shorter list of just 19 targets that will do the most good for the world. Every dollar spent on these targets will likely produce $32 of social good – more than four times more effective than spending on all 169. Being smart about development spending could be better than quadrupling the global aid budget.
The short list covers a lot of ground; what connects the targets is the amount of good they will do for people, the planet, and prosperity.

Consider a few targets that would do so much to help people. Tuberculosis is a “hidden” disease, but a much bigger problem than headline-grabbing Ebola. More than two billion people carry the TB bacterium, and at some point about 10% of them will develop the disease, which kills some 1.5 million victims per year (compared to 20,000 dead in the recent Ebola outbreak).

Yet treatment is inexpensive and, in most cases, highly effective. Spending a dollar on diagnosis and treatment pays back $43 by giving people many more years of productive life.

Another outstanding use of resources is to reduce childhood malnutrition. Good nutrition is especially critical for young children, because it allows their brains and bodies to develop better, producing life-long benefits. Well-nourished children stay in school longer, learn more, and end up being much more productive members of society. The available evidence suggests that providing better nutrition for 68 million children each year would produce $45 in long-term social benefits for every dollar spent.

Some targets that benefit the planet also provide excellent value. Cutting fossil-fuel subsidies, which amount to nearly $550 billion a year – would reduce pollution and CO2 emissions while freeing up resources for investment in health, education, and infrastructure. In total, each dollar not spent on fossil-fuel subsidies would provide more than $15 of planetary benefits.

Focusing on coral reefs turns out to be a surprisingly efficient target. It preserves biodiversity, with healthy reefs producing more fish and attracting more tourists. Each dollar spent protecting them can provide benefits worth $24.

Better nutrition and greater access to education will help. But so will targets for prosperity, allowing hundreds of millions to lift themselves out of poverty. As we have seen repeatedly – in China, South Korea, Chile, India, and elsewhere – fewer trade restrictions can lift incomes and reduce poverty. Economic models show that a successful reduction of trade barriers like that foreseen in the ongoing Doha Round of multilateral trade talks could add $11 trillion to global GDP by 2030. This would mean $1,000 more for each person in the developing world every year, and would lift a staggering 160 million people out of poverty.

This list of smart targets will not solve all of the world’s problems; no realistic list, however ambitious, can. But the 19 targets identified by the Copenhagen Consensus can help the world’s governments to concentrate on key priorities. These targets will do more than four times as much good per dollar spent as spending across all 169 targets would do. Governments should stop promising everything to everyone and start focusing on delivering the most possible.

Author: Bjørn Lomborg is an adjunct professor at the Copenhagen Business School.

The transport sector is the world’s largest oil consumer. Half of trips should be made by bike or on foot by 2030 to control global warming, a report says.

Cable Cars For Paris Commuters To Launch By 2025

From walking to cycling, how we get around a city is a gender equality issue - new research

What decarbonizing buildings teaches us about climate priorities