How does the arrival of foreign supermarkets affect developing world consumers?

This process of retail globalisation has led to heated policy debates and, more importantly, those debates have also led to stark differences in policies towards retail foreign direct investment across developing countries:

Some countries such as Argentina, Brazil, Mexico and most of Eastern Europe chose to fully liberalise retail foreign direct investment at the beginning of the 1990s;
Other developing countries including India continue to severely restrict foreign retail entry and others such as Indonesia, Malaysia and Thailand re-imposed regulatory barriers on foreign retailers after initially allowing entry (Dufey et al. 2008, Wrigley and Lowe 2010).

These policy differences matter because retail is a key sector of the economy in terms of both employment and consumption, on average accounting for 15-20% of total employment, 10-15% of total GDP, and more than 50% of total household expenditure in developing countries.2

In our recent research (Atkin et al. 2015) we bring together a new and uniquely rich collection of microdata to assess the consequences of retail foreign direct investment in the context of Mexico, a country whose retail landscape underwent a dramatic transformation as foreign retailers came to dominate its market over the last 20 years. Our analysis coincides with the major wave of foreign store expansion in Mexico. Over the same period – January 2002 to March 2014 – the number of foreign supermarkets close to quadrupled from 365 to 1,335 stores, greatly expanding their geographic coverage beyond the largest cities. This rapid expansion provides an ideal empirical setting to study the impact of retail globalisation.

Our collection of six micro-level datasets covering store barcode prices and consumption, worker incomes, and profits allow us to empirically estimate a very general expression for the local welfare effect of foreign retail entry, and to decompose that effect into six distinct channels – three on household cost of living (price indices), and three on household nominal incomes.

On the cost of living side, we distinguish between the effect on consumer prices at pre-existing domestic retailers (the pro-competitive price effect), the effect due to exit of domestic retailers (the pro-competitive exit effect), and the direct price index effect which encompasses all the consumer gains derived from being able to shop at the foreign store itself (including different prices for pre-existing products, new product variety as well as different store amenities). The nominal income effect comprises a retail labour income effect (from employment in either traditional or modern retail), a retail profits effect for domestic store owners, and an indirect effect on other sources of household income from non-retail sectors of the local economy.

To ensure that the empirical moments that we feed into our welfare expression are causally identified, we use an event study design that draws on information on the date of opening and store location of all foreign-owned supermarkets in Mexico in combination with high frequency data on local economic outcomes, such as consumer prices or household incomes. This strategy allows us to transparently and non-parametrically test to what extent pre-existing trends in prices or incomes may confound the comparison of local economic outcomes before and after foreign retail entry. As an example, Figure 1 shows the event study for the prices charged at domestic stores pre and post foreign entry. We find that two years after the entry of the first foreign supermarket, retail prices in domestic stores in the same municipality are 4% lower than in the absence of a foreign entrant.

Figure 1. The effect of foreign store entry on consumer prices in domestic retailers3 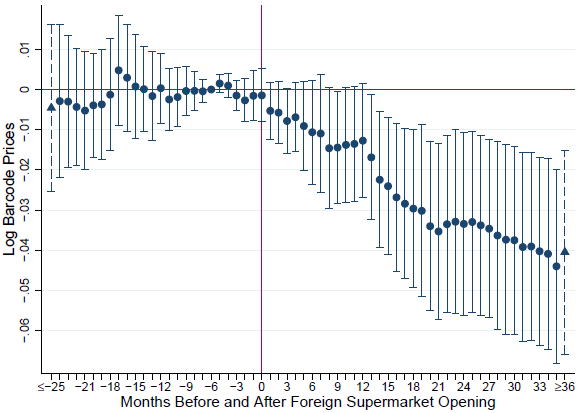 As depicted in Figure 2, we find that foreign supermarket entry causes large and significant welfare gains for the average household equal to 6.2% of initial household income. The majority of this effect is driven by a significant reduction in household cost of living. While there is a 0.7% increase in the cost of living due to the exit of domestic stores, this is more than compensated by a reduction of 1.6% due to a reduction in the consumer prices charged by pre-existing domestic stores and a reduction of 5.5% due to the direct price index effect (i.e. foreign supermarkets offering cheaper prices, new varieties and different shopping amenities to consumers). The average reduction in prices charged by domestic retailers was shown in Figure 1. The relatively large direct effect is consistent with raw moments in the data: foreign retailers charge on average 12% lower prices for an identical barcode in the same location and time, offer five times the number of products compared to modern domestic stores, and constitute on average more than one third of total household retail spending after foreign entry.

Figure 2. The gains from foreign retail entry across the income distribution4 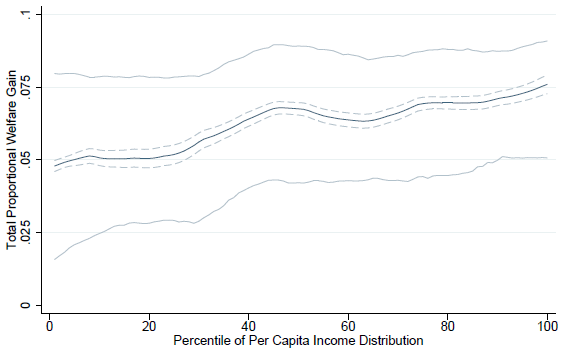 The nominal income effects are small in comparison. We find little evidence for impacts on average municipality-level household incomes or employment rates. We do, however, find evidence of store exit and adverse effects on domestic store profits, employment and labor incomes for workers in the traditional retail sector. While these adverse income effects are sizable, they affect only a fraction of households and so are muted in the aggregate by reductions in the cost of living that benefit all households.

Finally, we quantify the distribution of the gains from retail foreign direct investment. While, on average, all household income groups experience significant gains from foreign entry, the richest income groups gain about 50% more than the poorest. We find that the key driver is the fact that richer households substitute over 50% of their retail consumption to foreign stores, while the poorest households substitute less than 15%. Since all local households face the same choice of local retail outlets, this indicates that wealthier households in Mexico value the consumption choices on offer at foreign stores far more than poorer ones (for example, due to the rich placing a higher value on foreign brands, high quality varieties and large pack sizes; as well as store amenities such as parking, car accessibility, wide aisles, security and hygiene).

Our analysis provides a number of insights that relate to ongoing debates about developing country policies towards retail foreign direct investment.

The debate commonly focuses on the potentially adverse effects for an important but nevertheless select group of households working in the traditional retail sector. Our findings suggest that this focus is too narrow. The empirical evidence from Mexico suggests that while these adverse nominal income effects are present, they are swamped at the local level by reductions in the cost of living that give rise to real income gains across all household income groups.

Wrigley, N, and M Lowe (2010), “The globalisation of trade in retail services”, Organisation for Economic Co-operation and Development.

1 Between 2000 and 2012, foreign affiliate sales of the 250 largest global retailers grew by 400% reaching $1 trillion (Deloitte 2014) and the share of foreign affiliates in total sales more than doubled to 25%. The stock of inward retail foreign direct investment in developing countries grew more than twenty-fold since the 1990s, and over the same period the developing country share in the world retail foreign direct investment stock more than doubled to 25% (UNCTAD 2014).

4 The figure depicts a non-parametric plot of the household gains from foreign retail entry against the pre-entry household position in the income distribution. The solid gray lines are the 95 percentile envelope of the non-parametric plots for each of the 1000 bootstraps described in Section 6 of the paper. The tighter dashed lines are the 95 percentile confidence interval that just takes account of sampling variation across households in the income and expenditure surveys

Image: A shopping trolley is pushed around a supermarket. REUTERS/Stefan Wermuth