The untapped potential of the elderly

There has been more than enough talk about millennials, the digital generation of the 1980s that’s entering the labour and consumer markets and re-shaping the world. In all this excitement, we have forgotten that, overall, the world’s population is getting older; two billion people will be aged 60 and over by 2050, 22% of the world’s population.

Increasing lifespans, reduced mortality rates and declining birth rates are reshaping the global population (see figure 1). According to a report in The Economist, between 2015 and 2060, the number of 60 to 79 year-olds will increase by 1.1 billion, or 131%. That is five times the increase in the number of children and teenagers, which will rise by only 220m, or 9%. The numbers of the oldest people of all (those above 85) will rise at the fastest rate of all (by 281% in 2015-60). 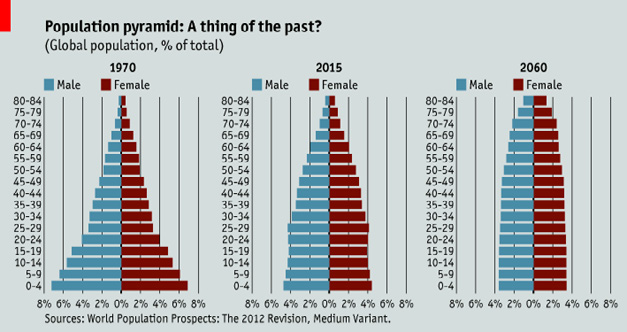 The world is growing older. And so must the working populace

We assume today that a working life ends at 65. If this assumption were to continue, a larger share of our population will be out of work in the next few decades creating significant dependencies on the working population. Current projections already estimate that by 2050, Japan will have 72 dependent people over 65+ for every 100 workers. For Spain, Italy, Germany these numbers range between 60-70%, a significant increase over 2015 (see figure 2). 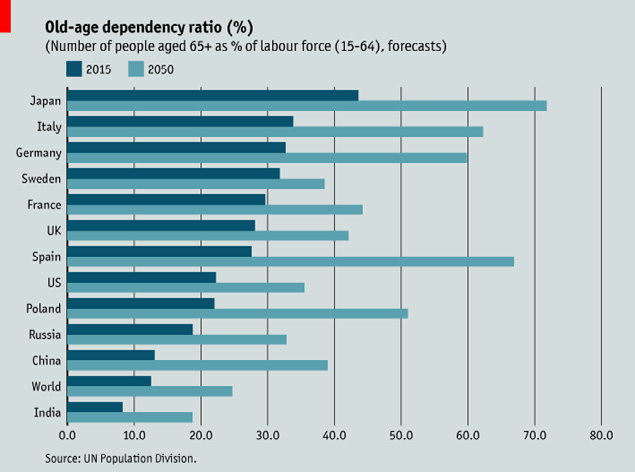 Are these numbers sustainable? They paint a picture of economic decline unless we are able to harness the talents of this aging workforce and make their productivity count. And the tide is turning – slowly but surely.

Keeping the elderly in the workforce

According to The Economist, almost 20% of Americans aged over 65 are now in the labour force, compared with 13% in 2000. Nearly half of all Germans in their early 60s are employed today, compared with a quarter a decade ago. There are many factors that determine whether people leave the workforce after 65. Skills and education, government policies, and social structures have a big role to play.

In the past decades, the rise of digital technologies has also made it easier for the older age groups to remain connected with the working population in varied capacities. With the limitations of accessibility, location and time factors removed, the elderly can now choose which hours of the day to work from home. This is supported by the change in the way we work. Crowdsourcing models are making it easier for people – no matter the age – to find a market for their skills.

Is productivity all that matters?

Let’s leave productivity aside for a moment. Let’s just look at the impact of employment on the 60+ age group from the perspective of a meaningful life. We all need a purpose; a feeling of being needed; a sense that we contribute something to society. How do we ensure that our increasingly older population continues to find these? Continuing employment is one of the ways to fulfil these needs.

Take the story of Sunayna (not real name). I met her at one of the meetings of a social group – Miitra – that I run for the elderly. She had had a tragic turn of events in her life; her immediate family had succumbed to illness and accidents. She was alone in a new city and didn’t know which way to turn. A homemaker for the most of her life, she suddenly found herself with a lot of time on her hands. She came to us seeking companionship and I am happy to say made some lasting friends. But what really changed her life was when she found an occupation. Fond of cooking, Sunayana started a home chef business catering to students staying nearby. She started participating in food fairs and soon, business took off. Today she is hard pressed for time and is happy with the extended family she’s found in the students who love her cooking. She’s needed, wanted and loved. And her skills brought it about.

There are many people across the world needing just that one window of opportunity to create many such success stories. What we must create is a socio-economic fabric that supports them. The frameworks already exist – the changing economic models (crowdsourcing), the power of technology (accessibility) – it’s time to accelerate this machinery.

The one thing my mother feared was her upcoming retirement. She is just 60, and worked for the government. Her main concern was, “what will I do the whole day?” She’s very active and energetic, and after 30 years in the same place, her whole life revolved around that job. Other than monetary concerns and the fear that she may be dependent on others for support, just the prospect of empty days filled her with dread. So we planned her retirement. She too loved cooking, our house was always full of people wanting a taste of her many recipes. So we invested in a small food joint and timed it with her retirement. She came out of her office and in to the kitchen. She meets new people every day and is happy making something new every day. She has no time on her hands, and an additional income beyond the pension. Adding to her skills, she’s learnt the POS systems and manages complex inventory sheets.

We need to plan for our ageing population and support them in their life choices beyond retirement. One thing that we need to do at the outset is create a support mechanism for this age group to learn new skills – a sort of a continuous learning program that matches their pace but ensures they can use technology for their benefit. There could be vocational trainings – perhaps hobbies could become an income source as they did for Sunayana. There could be business incubators that help in scaling entrepreneurial ventures.

We could have career counselors specializing in employment options beyond 65. These people are a goldmine of experience, tapping their talents must be on top of business agendas and HR policies need to be framed accordingly.

Inclusion in and contribution to society is a prime concern for this demographic. They can make a significant contribution to social participation initiatives such as volunteering – where every helping hand is a boon. Tailored programs keeping their skills and experiences in mind can be valuable to the community as a whole. Sharing experiences can benefit the young and the old alike.

There is a lot that this group can add value to as an active part of our workforce. The question is, are we ready to invest our time in them?

Author: Supriya Jain, Head, Thought Leadership Marketing, Wipro. The views expressed in this article are the author’s and Wipro does not subscribe to the substance, veracity or truthfulness of the author’s views.