How sustainable is Greece’s debt?

Determining the level at which sovereign debt is sustainable is an art as well as a science.

But even if we stick to the science side, a debt sustainability analysis (DSA) is not exactly a precise exercise.

Fortunately, the IMF is very transparent and its DSA programme can be conveniently downloaded from the web and then manipulated.[1] Moreover, the staff of the IMF has substantially enriched the framework over the last years and is asking for commentary and feedback from the profession. So it is a worthwhile learning exercise to take a look under the hood.

The most important lesson is that the approach for DSA differs fundamentally depending on whether the country has market access or is a low-income country. For market-access countries the time horizon is short (five years), the focus is on nominal debt levels, gross financing needs, and the debt profile (IMF 2011, 2013a). For low-income countries, the framework is quite different.[2] It focuses on the long run (20 years), on policy-dependent debt thresholds, and on solvency and liquidity in present-value terms (IMF and World Bank 2004, 2005; IMF 2013b).

Why focus on debt in present value rather than gross terms? Because the majority of low-income countries’ external debt is owed to official creditors, at long maturities, and below market interest rates. In order to account for differences in the debt profiles across countries and time, the framework discounts the nominal debt into more sensibly comparable present values.

Applying the right framework to Greece

Does this sound familiar? That is because Greece’s debt profile matches this description closely.

But these nominal values ignore the fact that the bulk of the obligations are low-interest rate liabilities due far in the future – in fact, the average weighted maturity is 15.7 years, at an average interest rate of 2.7% (PDMA 2015). This compares to secondary market yields in excess of 10% on the 10-year bonds for the majority of the year. These numbers reflect the concessional nature of Greece’s official sector loans.

The European Stability Mechanism (ESM) has also argued that the nominal debt in Greece should be seen in the light of these concessional conditions, and calculated the net present value debt relief granted by the official creditors’ debt restructuring in November 2012 (ESM 2015). At the time, maturities of the bailout loans were stretched by 15 years, interest payments deferred by 10 years, and the interest rates lowered by 100 basis points. The ESM computes that this resulted in a present-value debt reduction of 49%, but does not look at the value of the remaining debt.

We therefore compute the net present value of total debt using the IMF and World Bank’s uniform discount rate of 5% for low-income countries (IMF 2013c). Due to the long average maturity of Greek public debt, the NPV debt/GDP ratio is only 93% – or the equivalent of almost one year of economic output less than the headline number.

Even using a lower discount rate equal to the average interest rate of 2.7% still results in an NPV debt/GDP ratio of less than 120%. A similar argument has been made by the analysts at a US hedge fund (Kazarian 2015). They suggest that when applying the European system of national and regional accounts (ESA), the gross debt amounts to only 69% of Greek GDP.[4]

Figure 1 shows the nominal and present value of the Greek debt profile. 50% of the loans by the EFSF and Eurozone member states are due after 2030, for which the present value is less than half of the nominal indebtedness. The significant back-loading of the repayment schedule has therefore resulted in a considerable NPV debt reduction. 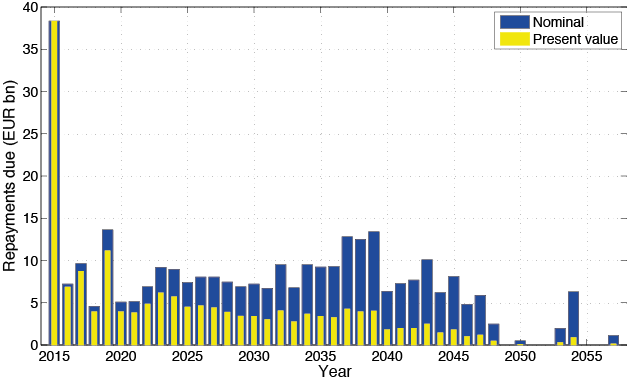 Granted, the numbers are still high. For advanced market-access economies the IMF threshold to determine the risk of debt distress is 85% of nominal debt/GDP. To evaluate the risk of debt distress in low-income country, the IMF and World Bank debt sustainability framework relies on a comparison of the NPV debt to a set of policy-dependent thresholds. These are derived based on a simple econometric Early Warning System of debt distress (IMF 2005, Kraay and Nehru 2004). Based on the model, the maximum values for various indicators of indebtedness are computed that imply a predicted probability of debt distress remains below circa 20%. These DSA thresholds for low-income countries in NPV debt/GDP terms lie even lower than the threshold for market-access countries, between 30% and 50% conditional on the strength of policy as measured by the World Bank’s Country Policy and Institutional Assessment (CPIA).

Greece breaks two out of three indicators for the debt stock (see Table 1). But with respect to the revenue dimension, the Greek fiscal stance looks less bleak than the current stand-off with its international creditors would suggest.

For the past five years, Greece has had almost no access to private capital markets, and its finances have been dependent on concessional official lending. Greek debt should thus be evaluated in NPV terms. This would also recognize the substantial official debt restructuring that has already happened.

None of the IMF’s standard DSA models seem to be appropriate for a case like Greece. The Hellenic Republic is a middle-income country that has highly concessionary financing conditions. This is a European (ESM, EFSF) innovation and thus the ESM should develop a new, appropriate DSA with relevant thresholds reflecting this special situation. DSA is the cornerstone of troika lending policies. But if the parties do not have a common understanding of the framework, communication may break down. Thus it would seem desirable to put more science into the discussion. In particular it would be important to agree on a common DSA model, and to make sure it is based on the relevant numbers.

IMF (2013b), Staff Guidance Note on the Application of the Joint Bank-Fund Debt Sustainability Framework for Low-Income Countries. Washington, D.C.

[2] Low-income countries are usually defined as countries eligible for the Poverty Reduction and Growth Trust (PRGT), with a PPP GDP per capita below USD 1,195 and limited market access.

[3] In a recent response to an inquiry by the Greek parliament (No. 160/30-4-2015), the Greek Public Debt Management Agency (PDMA) broke down the debt composition. See Euronews (2015) for an English translation.

[4] Applying the ESA would also imply to account for the financial assets under control of the Greek government, which have been valued at more than €90bn in 2013. The Greek net debt/GDP ratio is only 18%.

Tel Aviv is now the world’s most expensive city

An annual global survey reveals the most expensive cities in the world. Find out where the cost of living prices are soaring or falling.

This is how COVID-19 hit household expenditure in Europe

New data reveals exactly how the pandemic impacted consumer spending across Europe - and there are some surprising results.