In a Special Report published by CEPS (Micossi 2015), I review the policies pursued by the ECB – from the changeover to the euro to the implementation of QE in early 2015 – under the twin criteria of their effectiveness in the pursuit of the ECB statutory objectives and the adequacy of the original institutional design set out by the Treaty of Maastricht.

As a result, the ECB has become not only the lender of last resort in the sovereign debt markets, but also a direct enforcer of fiscal discipline and structural reforms commitments by indebted EZ countries.

That the ECB could legally perform all of these tasks bears witness to the flexibility of the TFEU and its Statute, but its tools and operating procedures were stretched to their limits. The place of the ECB amongst EU policymaking institutions has been greatly enhanced, but this has entailed repeated intrusions into the broader domain of economic policies, with consequences for the institutional balance in economic policymaking within the EZ that have yet to be ascertained.

Monetary policy was strongly pro-cyclical in the EZ periphery

An important feature of the single monetary policy is that overall, it was guided by monetary developments in the ‘core’ countries, leading to highly pro-cyclical money and credit conditions in the EZ periphery; too lax until 2007, fuelling the build-up of unsustainable imbalances in external payments, and too tight in the crisis years, aggravating unemployment and the slump in economic activity. The reason is that, far from bringing steady market discipline to bear on divergent countries, the single currency accommodated economic divergences in 2002-07, fuelling the build-up of massive external payment imbalances that were bound to become unsustainable. 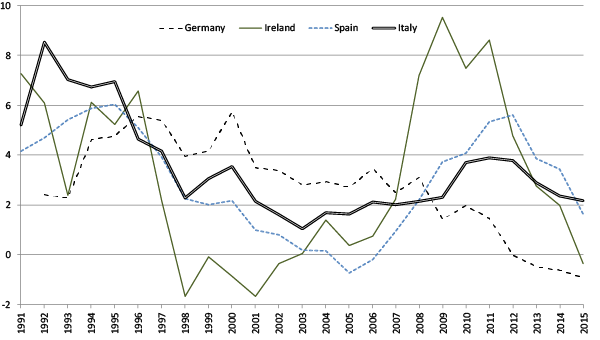 As can be seen from Figure 1, real interest rates in the periphery fell below German rates already in the late 1990s, as the risk premium fell abruptly in anticipation of the inception of the euro – which seemingly removed, in investors’ eyes, exchange rates as well as the sovereign risks.

Then market sentiment turned around. The reassessment of the risk of investing in the peripheral countries was dramatic, bringing about punitive real interest rates at the very time when the economy started to plunge and fiscal policies turned increasingly restrictive. Cross-border interbank funding and wholesale money markets seized up, leading to a severe credit crunch that crippled the economy, while liquidity in the sovereign debt markets evaporated.

All this provides a strong indication that one currency cannot fit all unless the member countries remove the underlying economic divergences. It also shows the paramount role of investors’ expectations in determining monetary conditions in the different parts of the EZ, with a distinct tendency of changes in risk premia to overshoot in both fair and bad weather.

There were two distinct phases to the crisis in the EZ. In 2008-09, the post-Lehman shock emanating from US capital markets was met without special strains in internal cohesion. Just like the other main central banks, the ECB reacted by lowering interest rates and massively expanding its refinancing operations for the banking system.

Financial tensions started to ease until, in 2010, the Greek sovereign debt crisis unsettled market conditions. Many voices in creditor countries questioned the appropriateness, or even the legality, of intervening to support sovereign debt markets in distressed countries. The lack of sovereign risk-sharing arrangements among EZ participants became all too clear to investors, who feared that Greece, and possibly other highly indebted countries, could be driven to default.

In order to tame extreme market turbulence, in May 2010 the ECB launched its Securities Market Programme (SMP) under which it would buy unspecified amounts of sovereign bonds in secondary markets “whose depth and liquidity were impaired”. The ECB did not disclose the total amount that would be spent and the set of securities to be targeted, which in all likelihood weakened their market impact.

The purchases under the programme were, by and large, concentrated in May-June 2010 and August-November 2011, and the programme was inactive for long stretches of time (Figure 2). In September 2012, the programme was discontinued and was substituted by the Outright Monetary Transaction (OMT).

In the autumn of 2011, the sovereign crisis started to mutate into a banking crisis – following the decision to impose large losses on private creditors with the second bailout programme for Greece. The emerging banking crisis in turn worsened the market assessments of sovereign solvency. The doom loop between sovereign and banking crises had set in.

Eventually, the prospect of collapse of the entire EZ led the European Council and the Euro Summit in June 2012 to launch the banking union project; while the German government let it be known that Grexit was not an option.

This was the context within which the ECB launched its OMT programme, whereby the Eurosystem would be prepared to intervene for unlimited amounts in secondary sovereign-bond markets of specific EZ members. Gradually, spreads on distressed sovereigns started to come down and cross-border funding for peripheral banks came back to life.

With this announcement, the ECB mutated into the lender of last resort in EZ sovereign debt markets. This was a momentous development made necessary by the fact that individual EZ participants do not control the common currency and therefore remain exposed to idiosyncratic confidence shocks (De Grauwe 2011a, 2011b).

More often than not, the ECB could only come to the rescue after the system has been driven close to a breakdown (Eichengreen 2015). Resistance by some members of the Governing Council was one reason. They considered it improper for the ECB to counter financial instability in sovereign securities markets, as this would weaken the pressure to reform on distressed countries. Of course, there are clear drawbacks to using the ECB’s monetary policy to combat moral hazard.

Another reason was the game of strategy underway between the ECB and the European Council. The ECB felt strongly that it was for the Council to set up adequate defences against idiosyncratic shocks hitting some members of the EZ (Bastasin 2015, Henning 2015). But the Council proved repeatedly unable to deliver, owing to disagreements among its members on the appropriate responses to the crisis.

The ECB turns to unconventional policies

The speech by President Draghi at the Central Bank Symposium in Jackson Hole in August 2014 marked a new turn in ECB polices to active expansionary push. Eventually, the continued weakness of the economy and the repeated downward revisions in the HCPI rate of increase, which in December 2014 turned negative for the EZ average, catalysed a broad consensus in the ECB Governing Council to take the plunge into QE. Already in the autumn of 2014, and even more in January 2015, the announcement of the new measures brought down long-term interest rates in the EZ, more strongly in the EZ periphery, and weakened the euro.

The real economic impact of QE, on the other hand, remains controversial. Much ammunition was provided to the sceptics by the experience of Japan, whose early experiments with QE at the beginning of the 1990s and the 2000s failed to revive economic activity, and by the fact that in the US and the UK the economy continued to show little response for quite a while after the start of QE.

As has been argued by Koo (2015), prolonged depression may have been the result of the private sector’s efforts to deleverage in order to repair balance sheets deeply impaired by the collapse of real estate and financial asset prices. Those who doubt the effectiveness of unconventional policies may underestimate their positive effects in facilitating and accelerating deleveraging, hence in creating over time the conditions for a return of private spending.

Figure 3 highlights the success of the Federal Reserve and the Bank of England in pushing nominal 10-year interest rates below the nominal growth of GDP in the aftermath of the Lehman failure. Specific measures to ease the predicaments of highly indebted households accelerated deleveraging. This was clearly not the case in Japan, where nominal GDP growth stayed below nominal interest rates through much of the 2000s, including intermittently after the launch in 2013 of the new QE programme. In the EZ, on the other hand, financial policies did not help reduce the interest burden, as long-term interest rates hovered well above nominal GDP growth rates through much of 2014.

The April 2015 GFSR (IMF 2015a) and the World Economic Outlook (IMF 2015b) show the reduction in household and corporate debt in the US and the UK between 2007 and 2014. It has also by now been established as a fact that the prolonged stagnation of the Japanese economy in the 1990s and 2000s is largely explained by its inability to restructure bad loans in the belly of the banking system (Koo 2008). In the EZ, the jury is still out, since QE has just started and deleveraging has not run its full course, with banks still encumbered by large non-performing loans in some peripheral countries, such as Italy.

Bini Smaghi, L (2014), “How can the eurozone exit low inflation?”, Keynote speech at the International Center for Monetary and Banking Studies, Paris, 4 December.

Author: Stefano Micossi is the Director General of ASSONIME; Professor at the College of Europe; Member of the Board of CEPS, BNL – BNP Paribas and CIR Group; and Chairman of Scientific Council of the School of European Political Economy, LUISS.

Image: The headquarters of the European Central Bank (ECB) are pictured in Frankfurt. REUTERS/Ralph Orlowski

While African and European states struggle to find common ground in response to COVID-19, the continents' cities are working together to build back better