Why are stock markets so volatile?

It is well understood that the stock market is volatile and difficult to predict. What is less well understood is why. What are the primitive sources of economic variation that drive these random fluctuations? The vast majority of commentary in the press, not to mention most economic theories, asserts that the market is driven by shocks (unpredictable fluctuations) to macroeconomic fundamentals that have important consequences for economic growth. We argue here, however, that the most important random forces behind the longer term gains in the US stock market have not been drivers of economic growth, but have instead been an accumulation of random shocks – largely uncorrelated with economic growth – that have resulted in redistribution between workers and shareholders.

The random shocks behind the volatility and unpredictability of the market should not be conflated with purely deterministic long-term trends. There is little mystery that the real value of the stock market drifts upward over long periods in a largely predictable way as productivity (driven by technological progress) improves. This same deterministic trend has also propelled output per capita and the average standard of living upward over the last several centuries. It is instead the random shocks, the boom and busts around this trend, about which we have little knowledge, yet on which a continuous stream of media speculation centres. Such random shocks can persistently displace the market from its long-term trend for periods as long as several decades. What drives these movements in the market?

Early empirical evidence suggested that one source of such random fluctuations is countercyclical variation in the stock market risk premium (e.g., Fama and French 1989) but was silent on its sources, not to mention the sources of cash-flow risk that have little to do with the market risk premium but nonetheless can have large effects on the stock price level. Thus the question remains, what are the sources of stochastic fluctuation that drive the market?

To address this question, in Greenwald et al. (2014), we take a two-pronged approach.

What we found is surprising and runs counter to almost any workhorse macroeconomic model. Shocks to technological progress that raise aggregate consumption play a small role in historical stock market fluctuations at all horizons. Instead, nearly all random fluctuations in the US stock market since the early 1950s are explained by two shocks that are largely independent of output and employment growth.

Contrary to the early findings cited above, estimates of these effects in the much longer samples of data available today appear to be more acyclical than countercyclical.

Our analysis begins with an empirical investigation, motivated by a simple accounting exercise. Consider a firm that produces output, sells it to generate earnings, then divides those earnings between wages paid to workers and dividends paid to shareholders. We refer to workers’ and shareholders’ portions of earnings as ‘factor shares’. The value of a share of stock in this firm, which is a claim on the firm’s current and future dividends, can increase for some combination of three mutually exclusive reasons:

To measure the impact of these three types of movements over time, we estimate a cointegrated vector autoregression (VAR) of consumption, labour income, and asset wealth (all in real, log per capita terms). We decompose the residuals of the VAR into three mutually orthogonal components corresponding to the three types of movements described above:

Figure 1 shows dynamic responses in US data. The productive technology shock increases consumption, asset wealth, and labour income by similar amounts, consistent with an increase in overall output. The factor share shock increases asset wealth while decreasing labour income and leaving consumption fixed, consistent with capital owners receiving a larger share of an unchanged pie. That consumption remains fixed on impact is an identifying assumption. An important empirical result is that the subsequent response of consumption is virtually zero. Thus, the factors share shock is purely redistributive, it does not portend any increase in the aggregate pie at any point down the road. The risk tolerance shock affects only asset prices, consistent with a change in investor preferences divorced from changes in the real economy. As before, the zero contemporaneous responses of consumption and labour income to this shock are identifying assumptions, but the finding that these variables never show significant responses even subsequently is a result, implying that the risk tolerance shock is disconnected from traditional macroeconomic activity.

So far, our analysis has included all forms of household wealth as asset wealth. To draw out the implications of these empirical disturbances for the stock market (a component of household wealth), we next take changes in stock wealth and regress them on current and lagged orthogonalised VAR disturbances. We find that these shocks explain the vast majority (87%) of fluctuations in quarterly stock wealth growth, implying that we can decompose almost all of the variation in the US stock market into components corresponding to these three sources of economic variation. We find that:

This analysis also allows us to decompose historical movements in stock wealth. 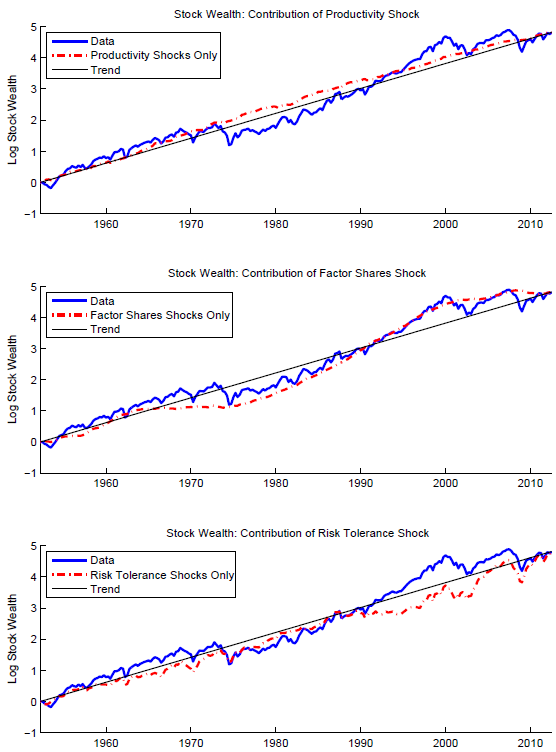 The solid line in Figure 2 shows the post-war deterministic trend. The three shocks displace the market from this trend. Here, the most striking feature are the large swings in stock market wealth around trend that have been attributable to movements in factor shares (middle panel), which has led to a sharp rise in stock wealth since the late 1970s. As an example of the magnitude of these forces for the long-run evolution of the stock market, we decompose the percent change since 1980 in the deterministically detrended real value of stock market wealth that is attributable to each shock. The period since 1980 is an interesting one to consider, as the cumulative effect of the factor shares shock persistently redistributed rewards away from workers and toward shareholders. (The opposite was true from the mid-1960s to mid-1980s.) We find that if there had been no such reallocation since 1980, the level of the stock market would be roughly half its value today. Moreover, the model does an excellent job of explaining the long-run movements in the market; together, the three mutually orthogonal economic shocks we identify explain almost all of the increase in detrended real stock market wealth since 1980 (specifically, they account for 110% of the increase, with the remaining -10% accounted for by a residual). These findings imply that the random shocks responsible for biggest movements in stock market wealth over the last 30 years are not those that raise or lower aggregate rewards, but are instead ones that redistribute a given level of rewards between workers and shareholders.

The vast majority of asset pricing models cannot match the dynamics just described. Moreover, they tend to rely on shifts in productive technology to explain most fluctuations in stock prices, at odds with the evidence presented above. Our work provides a parsimonious asset pricing model that is able to match our empirical findings (and a host of other benchmark stock market facts) using three key features:

These findings have implications for macroeconomic modelling and our understanding of the aggregate fluctuations that drive the market. For example, the long-run outlook for the market may be quite different today than it was 30 years ago, when labour costs were higher and the scope for redistribution greater. To the extent that the economy is approaching a limit in the amount of shareholder/worker inequality that can be sustained, the next 30 years could bring far more modest gains in the US stock market.

Image: A street sign for Wall Street hangs in front of the New York Stock Exchange May 8, 2013. REUTERS/Lucas Jackson

The United States has been experiencing unusually hot and dry weather since late 2020, increasing risk of heat-induced medical emergencies and wildfires.