What does it take to be a Technology Pioneer?

Entrepreneurs are using their “millennial mindset” and the record amount of venture capital available to address challenges in fields such as medtech, fintech, digital security and energy. This is the main conclusion of the World Economic Forum in reviewing its annual list of Technology Pioneers, which this year consists of 49 companies from 10 countries.

Among those awarded are UK-based TransferWise, which revolutionized money transfers; Holland-based Plant-e, which generates electricity from plants; and US-based Editas Medicine, which is exploring genomic editing applications. They are part of a broader group of entrepreneurs who operate in sectors with high entry costs and at the centre of some of the world’s challenges, including energy production, healthcare, finance and digital security.

These entrepreneurs display what can be called a millennial mindset, says Fulvia Montresor, Head of Technology Pioneers at the World Economic Forum. “Today’s Technology Pioneers want to have their cake and eat it, too. Knowing the world has pressing challenges, they are following both their entrepreneurial passions and fulfilling their civic roles at the same time.” 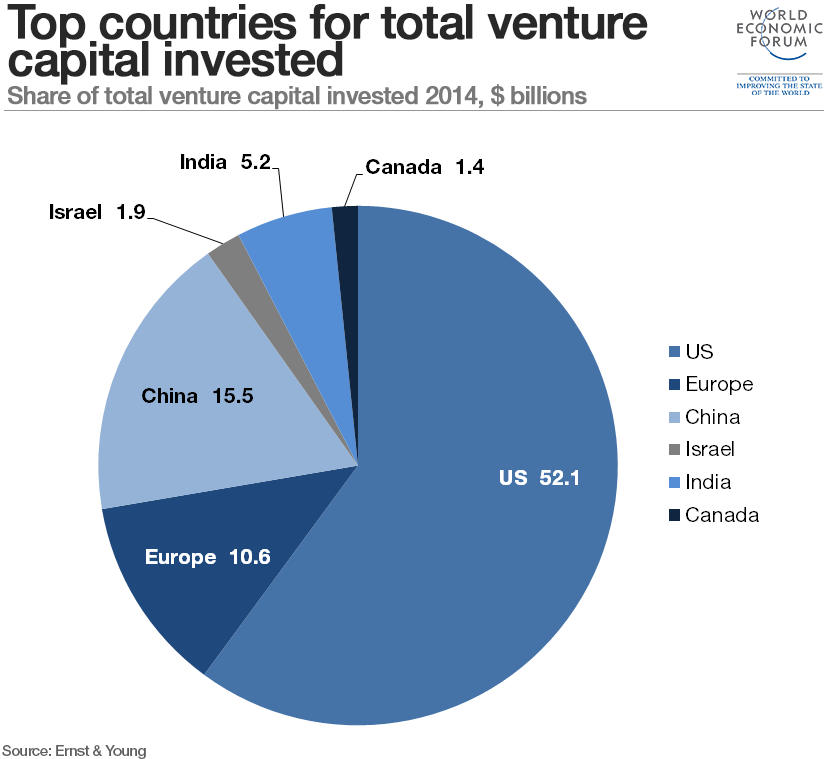 While this millennial mindset is developing globally, American-based entrepreneurs continue to dominate the list of Technology Pioneers: they account for more than two-thirds of the recipients, followed by the UK (4), Israel and the Netherlands (2), and individual recipients of Canada, Germany, Ireland, Italy, Sweden and Taiwan, China. France and Spain were among the countries not counting a recipient.

This dominance can be linked to the available funding, large domestic market with uniform regulations and welcoming environment, says Montresor. “Money and a big market remain decisive, and the US has those to an extent that other regions can’t match.” It is a reason why some of the Tech Pioneers founded elsewhere, such as Avellino Labs with its Korean roots, have decided to build their companies in the US.

According to Ernst & Young data, featured in a recent Forum report on Alternative Investments, 2014 was the best year for venture capital since 2001, with investments of almost $87 billion. That constituted a rise of some 60% compared to 2013. US tech hubs in Silicon Valley, New York and Boston together accounted for more than 60% of the total, but other regions, particularly China and India, did see a dramatic rise.

To make up for the lack of venture-capital funding, Nicholas Davis, Head of Society and Innovation at the World Economic Forum, says entrepreneurs from Europe and elsewhere could consider embedding their operations in a larger, established companies. “Due to the lack of funding and a fragmentation of the markets, such collaboration is particularly interesting in Europe,” he said. This information can be found in a separate Forum report, released today, on Collaborative Innovation.

Full details on all of the Technology Pioneers 2015 can be found here.

Have you read?
Starting over in the global food system
How can you generate electricity from living plants?
The light fixtures that mimic natural light

New research looks at the role of innovation in building competitiveness and successful businesses. Here are 3 key takeaways for managers.