M-PESA has made quite some headlines since its introduction in 2007. After its launch, the mobile money technology became the payment method of choice across Kenya, given that its use poses lower risks than informal payment methods, storing money in mobile form implies lower risk than holding cash, and using M-PESA for payment purposes costs less than bank transfers. As of 2011, 70% of the adult population in Kenya had an M-PESA account (Jack and Suri 2011, 2014) and M-PESA has contributed to financial inclusion. There is evidence that the use of mobile money increases the use of formal savings accounts and allows for more effective risk sharing. In recent research, we show another important channel through which mobile money can enhance economic development. Namely, by allowing easier access to larger amounts of trade credit, mobile money allows firms higher production, with important macroeconomic repercussions.

In Kenya, M-PESA is the most commonly utilised electronic money service allowing users to send money to any cell phone owner via SMS messages. Cash can be transferred into M-PESA deposits and vice versa via specialised agents, which are widespread across the country. After being introduced in 2007 by Safaricom, mobile money usage has grown rapidly. As of December 2014, the number of total M-PESA agent outlets reached 124,000 and the number of customers 25 million (out of a total population of 45 million). During 2013, 282.5 million transactions were conducted in total, and the total value of money transferred was 1.9 million Kenyan shillings (US$22 billion) – equivalent to 40% of Kenyan GDP in 2013.  There are many reasons for this rapid growth and success of M-PESA, including the dominant market position of Safaricom, the aggressive marketing and expansion campaign in the early days, and the need for payment services for families with members often spread across the country (Eijkman et al. 2010).

In this study we use the Kenya FinAccess Business Survey 2014, designed by the Financial Sector Deepening Trust Kenya (FSD-K) together with Tilburg University. It includes novel business mobile money usage questions. The survey data were collected in 2014 by FSD-K from a representative cross-section of 1,047 mainly small and medium enterprises in Nairobi.

Using a formal regression analysis we explore which businesses are more likely to use M-PESA when buying supplies. 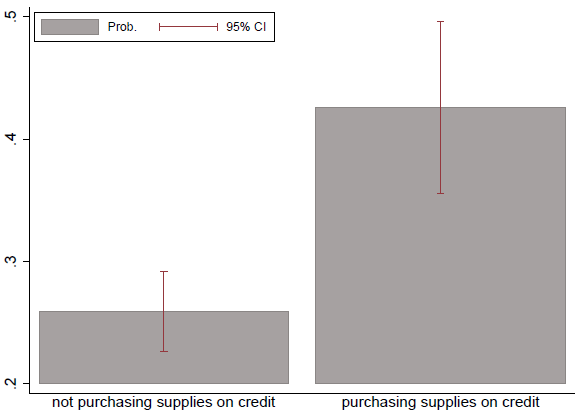 Figure 1 shows the predicted share of businesses considering mobile money as a common method of payment to pay to suppliers according to whether the businesses have credit relationship with input suppliers, and the 95% statistical confidence levels for those shares after controlling for other business characteristics.

We construct a model that explains the bi-directional causality between the use of mobile money rather than cash when dealing with suppliers and access to credit from these suppliers. Specifically, we model entrepreneurs with access to a production technology that converts supplier provided inputs into consumption goods. Suppliers sell inputs to entrepreneurs in return for an immediate payment and/or for a credit repayment to be made after the production is finalised. Access to supplier credit, in turn, allows for a higher production scale. Entrepreneurs only have access to supplier credit if they are part of a network, which can enforce social sanctions in the form of excluding defaulters from accessing trade credit. Such enforcement mechanisms could be effective in a variety of contexts where formal institutions are weak (Greif 1993, Platteau 2006). Especially, in the context of development economics, the case for inducing repayment through exclusion-sanctions has been well argued (Besley and Coate 1995).

On the one hand, using cash for purchases and credit repayment carries the risk of theft, which will not only negatively affect credit-constrained entrepreneurs but will also limit access to credit for those entrepreneurs who are connected to the network. Using mobile money, on the other hand, comes with certain transaction costs but reduces the risk of theft to zero.

Mobile money increases both the share of entrepreneurs with access to and who are willing to use trade credit and the amount of trade credit provided.

There are two reasons for that. First, for a borrower the cost of theft is higher when purchasing inputs, because if the initial endowment is stolen, the entrepreneur suffers not only the endowment loss, but due to credit market frictions the ability to borrow during that particular period. Similarly, for a debtor at the trade credit repayment stage, theft is not only associated with the loss of current value of cash but also the highly important loss of future credit market access. The use of mobile money and the use of trade credit thus complement each other, as the benefits from avoiding the risk of theft are higher for trade credit borrowers. Lower costs of the mobile money technology, and thus wider take-up, will therefore broaden the use of trade credit and ultimately production of firms.

We calibrate the stationary equilibrium of the model to match a set of moments that we observe in the Kenyan FinAccess Business Survey 2014. The parameterised model matches the Kenyan SME data well along the dimensions that we calibrate.  Most importantly, the calibrated model predicts a similar fraction of M-PESA users among entrepreneurs that use supplier credit as we find in the actual data, thus supporting the assumptions and mechanisms of our theoretical model.

Using the firm-level survey mentioned above and our model, we gauge the economic significance of this effect. Comparing an economy with and without mobile money, we find a difference in macro output of 0.47%. Finally, to assess the economic importance of the mechanism we have proposed, we calculate its contribution to economic growth of Kenya since the introduction of M-PESA in 2007. Kenyan total factor productivity (TFP) and real per capita income grew 3.3% and 14%, respectively, between 2006 and 2013.

This implies that the mechanism we have proposed can explain 14% of TFP growth and 3.4% of per capita real income growth over the same period, suggesting quite a large economic impact of mobile money technology.

Our findings have important policy implications. For a long time, the focus of the financial inclusion debate has been on credit and savings services. Our results contribute to an expanding literature that shows not only the importance of effective payment services but also the promise that digital payment systems can hold. Additionally, while an extensive literature has focused on the lack of access to credit services by enterprises as important growth constraint in developing countries, we show the importance of effective payment services for expanding economic and financial transactions in an economy.

Platteau, J (2006), “Solidarity norms and institutions in village societies: Static and dynamic considerations,” Handbook on the Economics of Giving, Reciprocity and Altruism, 1, 819–886.

Author: Thorsten Beck is Professor of Banking and Finance at Cass Business School in London. Haki Pamuk is a PhD student at the Department of Economics at Tilburg University. Ravindra Ramrattan (1983 – 2013) was the research economist at Financial Sector Deepening (FSD) Kenya between 2011 and 2013. Burak Uras is an Assistant Professor at Tilburg University specializing in Financial Economics and Macroeconomics.

The secret to designing a positive future with AI? Imagination

Why science fiction authors and filmmakers can work alongside policymakers and AI experts in crafting a positive vision for the future economy.

A new report claims that the cybersecurity market is broken, with better products being driven out of the market. Here are three ways to fix the market.

These 6 skills cannot be replicated by artificial intelligence