An in-depth understanding of foreign exchange liquidity is important for at least three reasons:

Our paper contributes to the international finance literature in three ways. First, we provide a methodological contribution to the measurement of foreign exchange liquidity using daily and readily available data. Second, to date foreign exchange liquidity has been comprehensively analysed only over short periods (e.g. Mancini et al. 2013) or using specific measures, such as the order flow or the bid-ask spread based on indicative quotes. Thus, it has been difficult to explain the significant temporal and cross-sectional variation in currency liquidity. Third, our study sheds light on the determinants of commonality in foreign exchange liquidity. 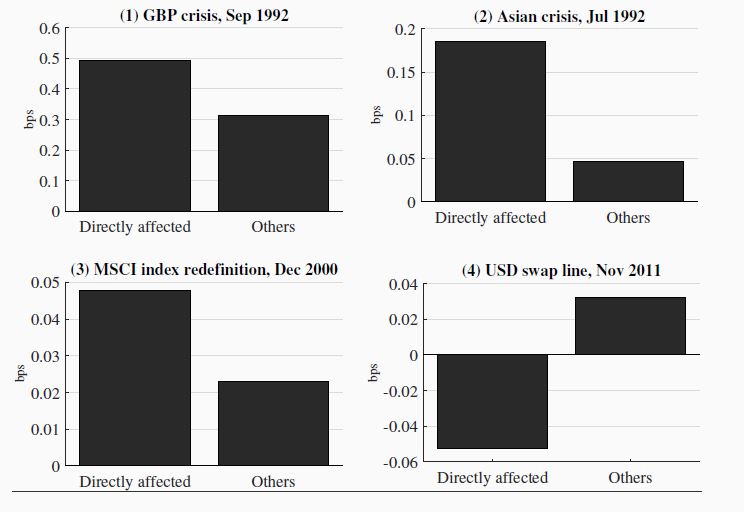 For each event, the effective trading cost is estimated for two groups of currencies: those directly affected by the event, and those not. The first two events are representative examples of deteriorating market conditions, while the third and fourth events might be considered more genuine shocks to the demand and supply of foreign exchange liquidity. This simple event study shows that foreign exchange liquidity is impaired during crisis episodes. It also suggests that foreign exchange liquidity reacts to seemingly exogenous shocks to demand and supply of liquidity, consistent with supply-side hypotheses as postulated by recent theoretical models (e.g. Vayanos and Gromb 2002, Brunnermeier and Pedersen 2009) and the previous literature focusing on specific episodes of demand pressure (e.g. Hau et al. 2010). Our regression analysis extends these results, showing that these effects are even stronger for developed currencies and foreign exchange rates bearing larger exposure to risk factors, such as those representing the investment leg of a classical carry trade strategy.

What are the main implications for policymakers and market participants? We think that our results highlight at least two dark sides of foreign exchange liquidity:

The significant temporal and cross-sectional variation in currency liquidities documented in our paper challenges the ‘static’ approach pervasive in the new liquidity requirements, such as Basel III.

1 The updated time series of foreign exchange liquidities are available at http://www.sbf.unisg.ch/en/lehrstuehle/lehrstuhl_ranaldo/homepage_ranaldo/research+material and the data analysed in Karnaukh et al. (2015) are available on the Review of Financial Studies website as supplementary material.

Image: Fake euro banknotes are seen in a block of ice. REUTERS/Eric Vidal.

Lockdowns and social distancing are accelerating the use of digital financial services, just as the SARS epidemic in 2003 hastened China’s launching of digital payments and e-commerce.