Despite recent efforts, many countries are constantly losing talent, human capital and well-being because of gender inequality and the often dismissive attitude towards it in many societies. According to the latest ranking of the Global Gender Gap Report prepared annually by the World Economic Forum, North America is in the top position with 75% of the gap being closed with Europe and Central Asia close behind with an average of 73%.

After these groups of countries, Latin America and the Caribbean follow, then Sub-Saharan Africa, and Asia and the Pacific. The last region in the ranking is the Middle East and North Africa. Keeping the status quo and not changing the mindset towards the gender gap in every country is simply shameful, even for developed countries. It is time to act now and not wait for these numbers to change on their own. Gender parity must be a strategic priority for both the private and public sectors.

There are multiple reasons for closing the gender gap. A direct and powerful reason to seek gender equality is, of course, equity. Women represent half of the population and therefore deserve not only equal access to health and education, but also greater economic participation, influence, and political participation. Unfortunately, this simply is not happening or is being done very slowly around the world. The problem is that we are not only being unfair, we are also losing wealth by not considering the total capacity of our human capital and talent from half of our population. 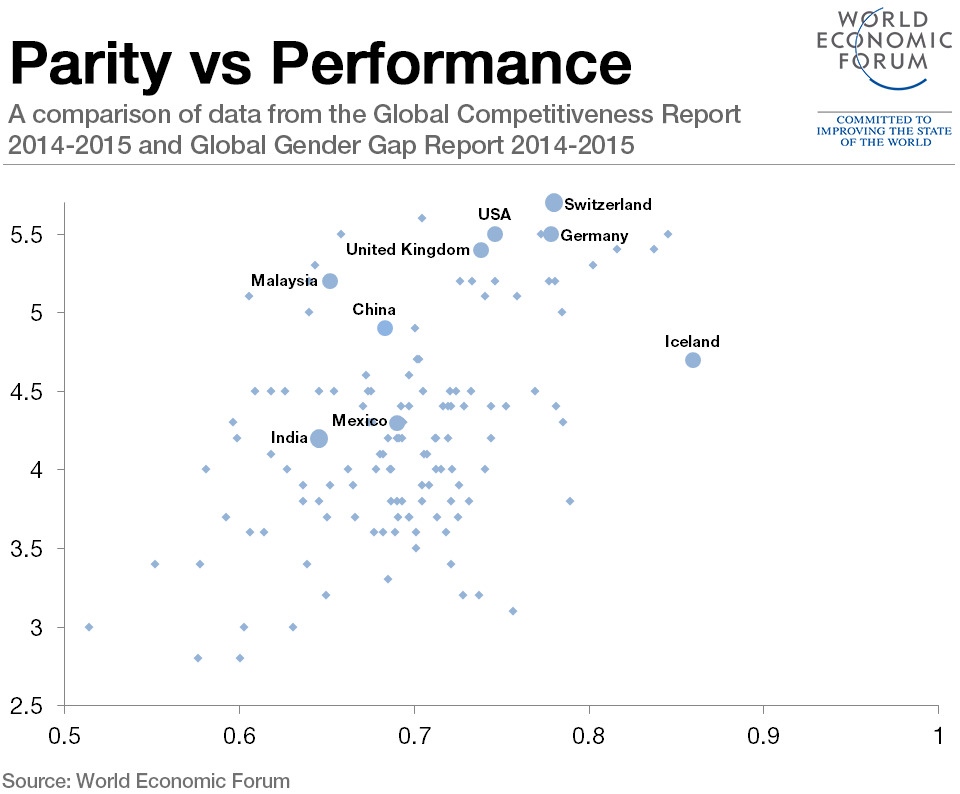 Looking on the bright side, we have seen that in just over a decade the proportion of women in the workforce in several countries has increased. But on the other hand, we see that most of the jobs that women have access to are concentrated in positions that require relatively low skills and therefore, pay low wages. And even for the same positions, the wage gap between men and women remains significant. For instance, in a S&Ps ExecuComp database used by Albanesi et al (2015) the ratio between the total compensation of women and men top executives in the United States is 82%.

This is also reflected in the results of a revealing survey by the Chilean Banking Regulator, which will be published in detail in the fourth quarter of 2015. The survey shows that in the banking system, women fill the majority of low-paid positions. In other top positions, from intermediate positions to board members, the participation of women decreases dramatically. In particular, only seven women are registered as members of the board of a total of 127 directorships. That is, half of our population holds only 5.5% of the positions on the strategic decisions making structures of the banking industry.

If someone believes that fairness, justice, and different visions and leadership styles are not assets in and of themselves, they should be convinced by economic reasons. According to a recent study Cuberes and Teignier, the fact that many women are excluded is related to the decrease in the potential talent of entrepreneurs in the economy. And this is ultimately reflected in the wealth and economic well-being of countries. The authors estimate that, for example, OECD countries could be 15% richer, on average, if they close the gender gap, and even more in both emerging and developing economies.

But this requires a change of attitude by every one of us, particularly men, and independently of the level of economic development of our countries. We can all contribute through a change in attitudes and intelligent diversity policies in the private and public spheres. This does not have to pose a threat to meritocracy. So, I firmly share the reflection of the English philosopher Mary Wollstonecraft “I do not wish women to have power over men, but over themselves.” This can be achieved with the participation of all and especially the contribution of men.

Have you read?
Which countries are best – and worst – for female entrepreneurs?
Why valuing caregiving is key to closing the gender gap
This is what the world’s education gender gap looks like