One of great ironies of our post-recession world is that savings are at record high, interest rates at a record low, technology is more sophisticated than ever and yet investment in the infrastructure of the future – from power and transport to hospitals and schools – continues to lag far behind every continent’s needs.

Instead of doing what we should be doing – building the world of the future – there is a yawning $20 trillion backlog running to 2030. This leaves 18% of the world’s citizens without electricity, 11% without clean water, nearly one in five deprived of basic healthcare and 58 million children denied a first day at primary school. 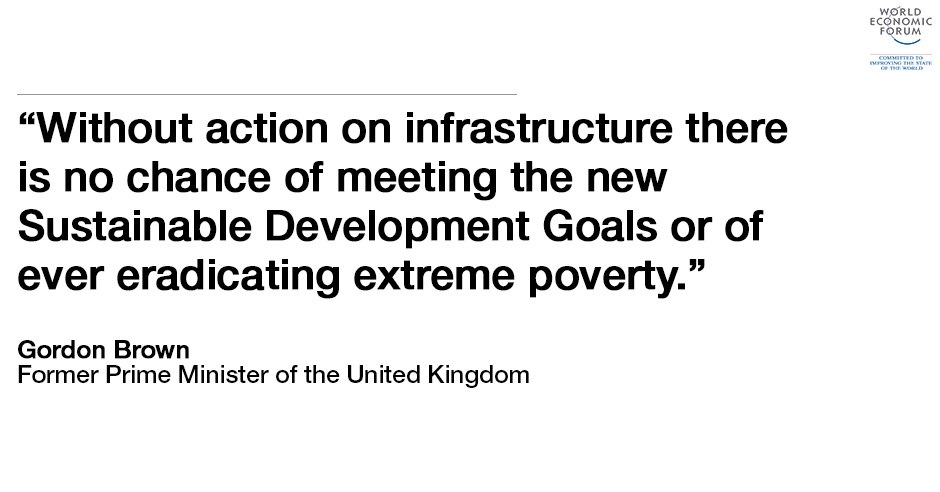 A basic failure to invest in roads and rail, especially in Africa, means villages and towns are cut off and the expansion of trade is close to impossible. If climate change is the world’s biggest market failure, we know that without action on infrastructure there is no chance of meeting the new Sustainable Development Goals or of ever eradicating extreme poverty. For us to build the world of the future requires a coordinated effort. Governments, international organizations, banks, businesses and foundations, can all make a difference by developing stronger public-private partnerships.

Of course, once they are built, infrastructure can command good returns. But we have consistently failed to attract investors into early-stage projects and subsequently failed to develop the project pipelines that will speed the flow of greenfield investment.

If the common perception that infrastructure investment was too big a risk, especially at the project preparation stage, held back its funding before the financial crash, two developments since 2008 have made life even more difficult. Firstly, the straitened financial position of the biggest spenders on infrastructure, public sectors, has held back much needed investment even as interest rates are low. And secondly, the new constraints arising from Basel III are now limiting the role of banks and big institutions as investors and project coordinators.

Roads to a better future

So in the last few years the focus of concern has been the absence of support for potentially bankable projects due to the shortage of investors prepared to take risks. Fortunately, in the last few months there have been signs of progress. Innovative minds are breaking free of the perceptions and constraints that gave us an annual infrastructure gap of $1 trillion between investments needed and investments made.

Having pioneered the initiation of the BRIC bank earlier in the decade, China has again led the way with the announcement of their Silk Road fund, and of the new Asian investment facility. These have made around $100 billion of new public funds available for emerging-market infrastructure over the next two decades.

But new ideas that reshape the relationship between public and private sectors are also reigniting commercial interest in infrastructure investment. At the World Economic Forum at Davos last year regional development banks, aid agencies, the World Bank and the IFC Corporation came together to propose new jointly funded credit mechanisms that will reduce the risk of early-stage investment in emerging-market infrastructure. In the last few months, with the support of the OECD, this has developed into a potential $100 billion credit facility.

At the same time a new emphasis on private-sector finance and public-private cooperation was central to the conclusions of the Sustainable Development Goals summit in Ethiopia this summer. At the meeting, the financing of the goals for education and health infrastructure was discussed. It was agreed that under Bertrand Badré, who has also proposed new forms of inter-agency risk-sharing, a forum should be convened annually for all interested parties in public and private sectors to see how the funding gap can be bridged.

Tackle the risks, one by one

As these new associations and the Addis Ababa summit recognized, the best solutions may now lie in new innovative forms of public-private partnerships based on the models promoted in Davos last year. The challenge will be to strike the right balance between the risk-taking and the guarantees necessary to get projects – especially initial preparatory work – off the ground.

The best way to change perceptions is to take risks head on and one by one. We must look at all the many risks that worry potential investors – from regulatory risk, currency risk and construction risk to political risk; from regime change and corruption to governments summarily tearing up contracts – and find practical and enforceable ways of dealing with them, hopefully mitigating them through better systems of public and private cooperation. Working through this agenda will inevitably change the role of the public sector from its previous dominance as the financier to being more of a partner, at times a catalyst and at times a guarantor.

The World Economic Forum has offered to host the intensive discussion needed between public and private sectors to chart the way forward. Many of these outstanding questions will form the basis of discussions at Davos in 2016 and at regional forums in Africa, the Middle East, Latin America and elsewhere. The plan is to ensure that if 2015 has been the year when the debate on how to solve the problems has been raised to a new and higher level, 2016 must be the year of action.