We all know that, on average, women earn less than men. This astonishing map based on European statistics sheds light on just how big the gap between gender pay levels is. 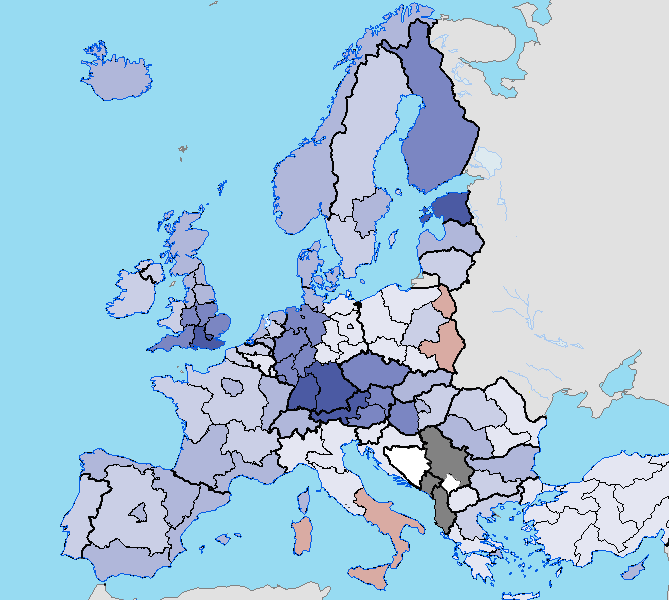 In Europe, generally one of the world’s most equal continents, the pay gap is still a major problem. According to the European Commission the average gender pay gap within the EU is around 16%. That means that for every £1 a man in the European Union earns, a woman will earn just 84p.

How much more men earn than women on average (%)

The average gap within the EU may be 16%, but pay levels throughout the whole of Europe differ hugely, with some areas of the continent seeing women actually earn more than men on average, and some areas allowing men to earn in excess of 25% of their female counterparts.

Across Europe, only three record women earning more money on average than men.

The areas are split between two very different countries in very different areas of Europe. In Italy, the south, Sicily and Sardinia see female employees earning between 0-11% more money than men, and the same is true for Poland’s eastern regions, home to both Warsaw and Krakow, the country’s largest cities.

While women may only earn more than men in a very small number of areas within Europe, the signs in many states are positive that the gender gap is falling. Italy continues its good record for paying women well, and of the three regions in the country where women aren’t paid more than men, all are in the second best category for wage equality, paying women between 0-10% less than men.

At the opposite end of the spectrum, men earn in excess of 25% more than women on average in all of Estonia, as well as in large parts of southern Germany, and in the South East of the UK. North eastern Austria is another area where women can expect to earn more than 25% less than their male counterparts.

Eurostat has got loads more amazing data about Europe, so check it out!

Author: Will Martin is a digital fellow at Business Insider.

Indie Mellink wants to tackle the issue of gender inequality in card games by creating an alternative deck of her own without kings, queens or jacks.