How can we fix the global financial safety net?

Economic theory provides compelling arguments for the potential advantages of integrated global capital markets based on the efficient allocation of resources. But, in practice, cross-border capital flows can be fickle and flighty, with destructive effects on the real economy. Countries have developed a variety of means to insure against these capital flows at domestic, regional, and international levels, collectively referred to as the ‘global financial safety net’. A strong and resilient global financial safety net is necessary to reduce the systemic implications of sovereign crises and allow nations to cope with shocks in order to reap the economic rewards of an integrated system of trade and finance.

The current arrangements are suboptimal, resembling more of a patchwork than a safety net. Applying lessons from the central bank experience during the Global Crisis, I argue that the effectiveness of the safety net would be enhanced by implementing policies that strengthen surveillance and the stress testing of countries’ balance sheets, and mechanisms to reduce the systemic spillovers of sovereign debt crises when they occur.

Countries insure against the risk of sudden stops in capital flows in different ways:

This multi-layered safety net has some advantages, but the current configuration is fragile, costly, and inefficient.

The composition of the safety net is fragmented (see Figure 1). The IMF element is fragile, with borrowed resources accounting for an unprecedented three-quarters, around $500 billion of which are temporary loans due to start rolling off next year, with no agreement in place to extend them (Figure 2).

Figure 1. Evolution of the global financial safety net as a percentage of external liabilities (1980-2014) 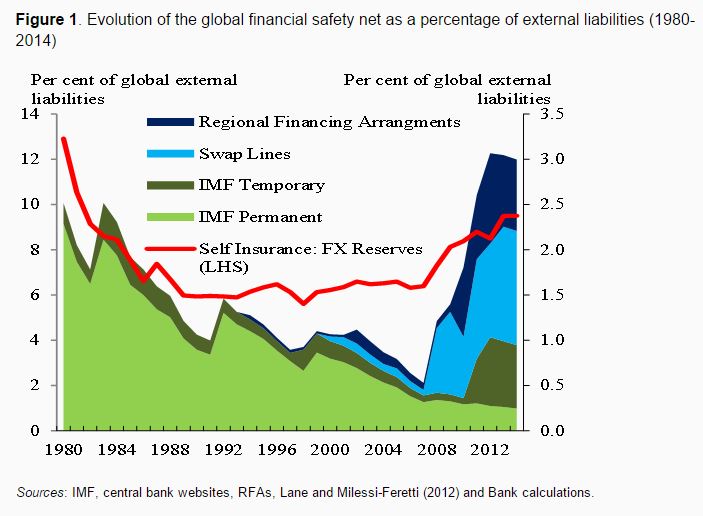 Individual countries’ reserves remain the largest component of the global financial safety net – reserves have risen from $1.5 trillion in 1995 to over $11 trillion now. Reserve accumulation has several problems:

Sources: IMF and Bank calculations.
(a) Degree of insurance is measured against the standard IMF metric.

Pooling reserves would be one obvious solution. But pooling at a regional level is ineffective against shocks that have regional spillovers. Regional arrangements are also complicated because of the difficulties of imposing reform conditions on a neighbour (as the Eurozone learned with Greece). Moreover, many emerging market economies do not have access to regional financial arrangements at all (Figure 4). Regional arrangements ultimately work best as part of a coordinated global system of support.

The role of the IMF

There are advantages to combining country surveillance and lending in one global institution, with an impartial and experienced staff. Moreover, risks are most efficiently pooled at a global level. This is the raison d’etre for the IMF. Signs of fragmentation of the global financial safety are in part a reaction to the failure to implement the 2010 quota and governance reforms to bolster the IMF’s resources and the representation of emerging market economies. The priority must be to implement those. But we also need to consider whether and how the temporary resources collected by the IMF in the form of bilateral loans could be put on a more permanent footing. One possibility is to extend these bilateral loans further. Another possibility is for the IMF to borrow directly from capital markets during a systemic crisis.2

A more reliable and flexible resource base would allow the IMF to more credibly perform a crisis prevention role of providing committed lines of credit to sound sovereigns through its flexible and precautionary liquidity lines. Take up of the IMF’s liquidity lines has been disappointing in large part because of stigma. As a country with a sound balance sheet, but concerned about potential liquidity problems arising from spillovers from shocks in the rest of the globe, what signal does requesting liquidity support from the IMF convey? Some members of the IMF have resisted more widespread use of these liquidity facilities because of concerns about moral hazard. Is there a way to address both the stigma and moral hazard issues?

These are precisely the issues the Bank of England (and other central banks) had to deal with in the context of central bank liquidity insurance facilities. The Bank of England has reduced the stigma associated with its liquidity insurance facilities by offering greater predictability of access on more favourable terms, thereby encouraging earlier take-up to limit contagion and protect financial stability during future crises (Carney 2013, Shafik 2015). This expansion of the provision of liquidity insurance was enabled by reforms to the regulatory framework for banks, which shouldered some of the burden of managing moral hazard (Hauser 2014, Tucker 2014). These enabling reforms included:

These reforms are recent and not yet fully tested under the most difficult circumstances, so it would be foolish to declare categorically that the Bank of England has eliminated stigma or moral hazard. And while there are ways in which sovereigns are like banks in terms of the liquidity risks they face (cross-border capital flows can ‘run’, just as deposits can ‘run’), sovereigns are also very different from banks. Nevertheless, I do think there are some lessons that can be learned from the overhaul of central bank liquidity facilities and the financial regulatory reform agenda that could be applied to the IMF as international lender of last resort and the global financial safety net. So, what would the equivalent enablers be for sovereigns?

The Bank of England’s Sterling Monetary Framework is available to banks and building societies on a presumptive basis – banks with a genuine short-term liquidity can rely on it when a shock hits.3 A key part of that access is the agreement of supervisors that firms meet micro prudential standards. By contrast, there is no system of pre-qualification for the IMF’s precautionary liquidity facilities, at the margin discouraging sovereigns from relying on the IMF as a form of insurance. One potential means of giving countries greater incentives to rely less on self-insurance could be to offer pre-qualification on the basis of strong economic fundamentals and policy track records as part of the Article IV process of surveillance, on a confidential basis.

The Bank of England carries out an annual stress test for major UK banks to assess their ability to withstand shocks in a range of scenarios and takes pre-emptive measures to enhance resilience if necessary (Bank of England 2013). There is scope for the IMF to strengthen its surveillance toolkit to include stress testing. The 2014 Triennial Surveillance Review highlighted the importance of national balance sheet analysis in detecting risks and identifying spillover channels (IMF July 2014). The IMF could extend debt sustainability assessments to cover external liquidity risks and analysis of how balance of payments flows are likely to respond in crisis scenarios. This ex ante analysis would provide greater assurance on the economic fundamentals of countries seeking liquidity support from the IMF and enable countries to take pre-emptive measures to increase their resilience.

Reducing the risk of disorderly spillovers

A strengthened global financial safety net alone does not address the tension between sovereign debt unsustainability and the systemic consequences of a disorderly debt restructuring. To do that, we need to put in place mechanisms to reduce the risk of systemic spillovers of sovereign debt crises, analogous to credible resolution regimes for banks. Here I offer three preliminary ideas:

Sovereign balance sheets could be made safer by using state-contingent bonds to increase risk-sharing with private sector creditors. For example, GDP-linked bonds, as advocated in a Bank of England paper in 2013 (Brooke et al. 2013), are debt instruments that directly link principal and interest payments to the level of a country’s nominal GDP and so provide a form of ‘recession insurance’.  Giving such bonds favourable treatment in debt sustainability assessments could enhance their attractiveness. More work is needed to pin down how such instruments could be implemented in practice. Work by the IMF on introducing flexibility for sovereign debt in distress situations is also worth considering (IMF June 2014).

The Bank of England has been a strong supporter of the recent contractual innovations to ease resolvability once default occurs: reforms to the ‘pari passu’ clause to prevent a repeat of the Argentinian situation; and changes to ‘Collective Action Clauses’ (CACs) in bond contracts so that decisions can be taken by a majority of creditors across all bond issuances, without the need for an issuance-by-issuance vote. The new style contracts have seen good take-up among emerging market issuers in their foreign-law bonds. Since October 2014, 59% of the nominal principal amount of total issuances has included these enhanced CACs for countries such as Mexico, Armenia, Bulgaria, Croatia and Egypt.4 But as the September 2015 G20 communique highlighted, there is a need to further explore market-based ways to speed up the incorporation of such clauses to the outstanding stock of debt.5

A commitment to bail in rather than bail out creditors of sovereigns can only be credible if losses can be absorbed safely without significant spillovers across borders. Sovereign exposures receive special and in some cases preferential treatment in prudential regulation, with low or even zero capital requirements and exemptions from large exposure limits. The Basel Committee has recently started a review of the treatment of sovereign exposures in the Basel Standards. This is an important part of the resolution agenda – reducing international spillovers from sovereign debt restructurings will make it more feasible to implement them when needed.

The current insurance arrangements that have arisen in response to recent events and liquidity pressures appear suboptimal – we need a stronger global financial safety net, with the IMF at its heart, and three key additional elements that will make the global safety net more effective:

None of this will be easy. But there are some important lessons from the experience of central bank reforms since the Crisis that, while complicated, show us what might be possible.

Carney, M (2013), “The UK at the heart of renewed globalisation”, Speech, Bank of England.

1 Bank of England staff estimates based on the spread between returns on reserve assets and those paid on domestic bonds.

2 Capital market borrowing is permitted in the IMF’s Articles of Agreement but has never been pursued, in part because the governance implications need further thought.

3 Further information on the Bank of England’s Sterling Monetary Framework can be found here:http://www.bankofengland.co.uk/markets/pages/money/default.aspx

Author: Minouche Shafik is the Deputy Governor for Markets and Banking at the Bank of England.

G7 Finance Ministers have backed the creation of a global minimum corporate tax rate of at least 15%, which could form the basis of a worldwide deal.

What lies ahead for inflation and interest rates?

The U.S. Bureau of Labor Statistics reported that current inflation rates sit around 4.2%, predominantly due to stimulus packages and furlough schemes.

Ethiopia’s blockchain deal is a watershed moment – for the technology, and for Africa

Building back broader: a new approach to fiscal and monetary policy

The gig economy: what is it, why is it in the headlines and what does the future hold?