How do we deal with ageing and shrinking populations?

Populations are getting older around the world—that’s no surprise in light of declining fertility and improvements in health care. But in many countries, something more dramatic is going on—the population is actually shrinking. These demographic developments portend stark fiscal challenges. What should countries—whatever their degree of economic development—do to respond to these challenges?

By the end of this century, according to recently released UN projections, populations will be shrinking in about two-thirds of the world’s countries: nearly 70 percent of more-developed countries and about 65 percent of less-developed ones (Figure 1).

They will also be aging. For the world as a whole, the share of the population older than age 65 is expected to increase from 12 percent today to 38 percent by 2100 (Figure 2, which shows the old-age dependency ratio: the 65-and-older population as a percentage of the population aged 15 to 64).

These two factors—shrinking and aging populations—will exert pressure on public finances. With current policies unchanged, spending on age-related programs (pensions and health) will rise, and the increase in outlays for these programs will be staggering. In more-developed countries, spending will reach 25 percent of GDP by the end of the century; in less-developed countries, to 16 percent of GDP (Figure 3). The fiscal consequences are potentially dire: such spending increases could lead to unsustainable public debt, require sharp cuts in other spending, or necessitate large tax increases that stifle economic growth. 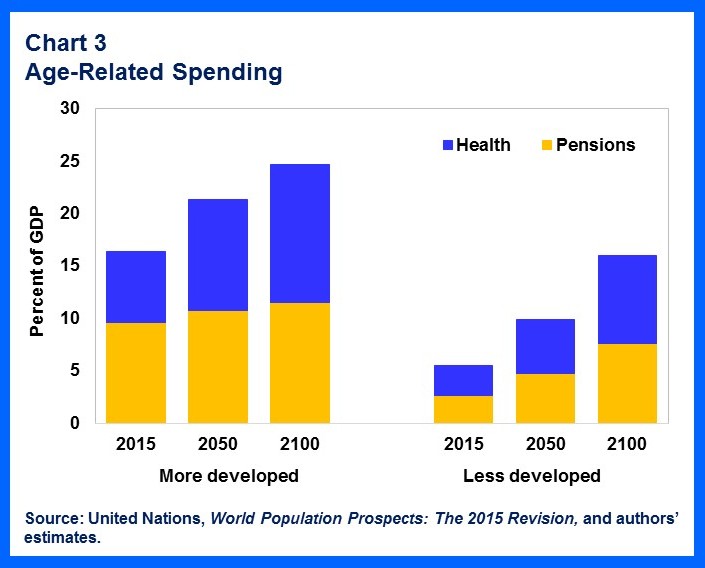 In the past, demographers have often underestimated declines in both fertility and mortality rates. If fertility and mortality turn out to be lower than forecast, the impact on fiscal variables will be even larger. For example, lower fertility on its own could (by increasing the ratio of older individuals to younger) raise age-related spending by another 8 percentage points of GDP in more-developed countries and another 4½ percentage points in less-developed countries by the end of the century. The fiscal impact of any larger-than-forecast increases in longevity would be on top of this.

But policy changes now can make a big difference later

The stark magnitude of the challenge necessitates a multi-pronged approach that could encompass the following:

One of the most urgent priorities is to contain the growth of health care spending, which has yet to be reformed to the same degree as pension spending. For example, if growth in health care costs per capita were kept in line with growth in GDP per capita, we estimate that this would lower public health care spending by 4½ percentage points of GDP by 2100 in more-developed countries and 3 percentage points of GDP in less-developed countries. Countries could pursue this in a number of ways: by increasing competition among insurers and service providers, improving the provider payment system to control costs, paying more attention to primary and preventive health, and making more effective use of health information technology.

Another important reform is increasing retirement ages to match longevity gains. Many countries have raised retirement ages over the last decade; however, these increases may not   prove sufficient to sustain pension systems. Increasing the retirement age by an extra five years has the potential to yield savings on pension spending of about 2 percentage points of GDP in both the more- and less-developed countries. Retirement age increases should be accompanied by adequate provisions for the poor, whose life expectancy is shorter than that of the average population.

On the other hand, raising migration from younger, less-developed economies to older, more-developed economies would relieve spending pressures, at least until migrants age and retire. This argument is being used in some European countries, especially Germany, in the context of ongoing refugee pressures. Increasing migration should not, however, be seen as a substitute for more fundamental reforms of entitlements.

Countries could also consider measures that raise labor force participation rates—especially for women and older workers—to help mitigate the impact of aging: addressing gender differences in property rights, inheritance claims, and property titling; enhancing women’s ability to pursue a profession, obtain a job, or open a bank account; and enacting rights for women to initiate legal proceedings, sign a contract, and head a household. In addition, it is crucial to eliminate fiscal disincentives that might deter women from participating in the labor market, such as taxation of households, which can raise marginal rates for second earners. Japan has lately embarked on such a policy.

On the tax side, this could include widening the base for value-added taxes, strengthening taxation of multinational corporations, greater use of energy taxation to get energy prices right and account for environmental and other costs of energy use, better exploiting opportunities for recurrent property taxation, and strengthening tax compliance.

In regard to spending, countries could improve efficiency by reducing energy subsidies, improving public investment management, and rationalizing public sector wage bills, including in education.

In sum, addressing the fiscal challenges of shrinking populations will require bold reforms, and countries are likely to choose varying solutions. Nevertheless, countries urgently need to rethink in a fundamental way what they can and cannot afford over the longer term. By undertaking reforms now, countries can address these issues in a more gradual and more politically palatable way.