The 11 most expensive countries for a university degree

Britain and the US are famous for high university tuition fees, but they actually don’t top the list of places that parents spend most of their income on higher education for their children.

It found the UK and US are actually somewhere in the middle of the top 11. 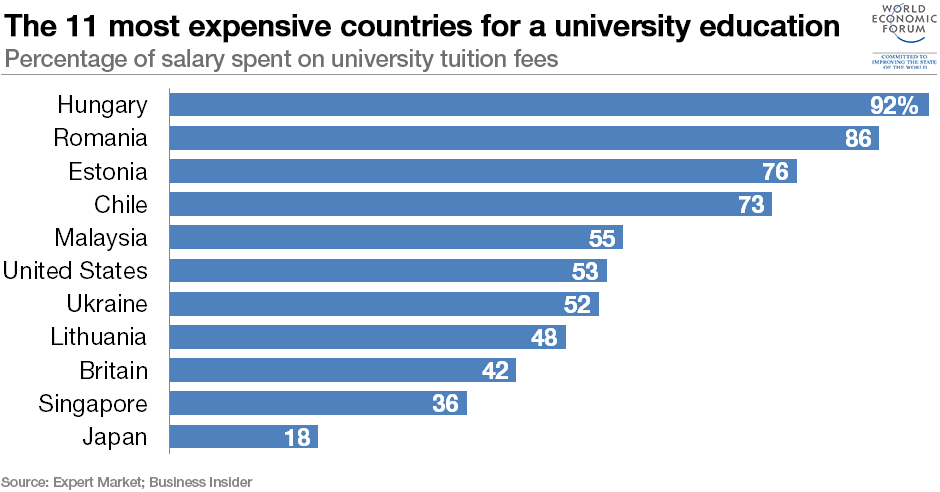 Hungarian parents spend the equivalent of nearly a whole average salary on higher education each year, limiting participation to people on higher incomes, who have savings or are heavily dependent on loans. However, the government does allow students to gain a free university education – as long as they stay in the country for 10 years after they graduate or face paying back their tuition fees.

Romania has a huge concentration of students in the sciences, especially medicine, within their higher education system. However, since the average person only earns 2563 Romanian new leu (£429, $651), only the rich are able to afford university for their children.

The Estonian government made the development of science and technology a national priority as of 2011 after the proportion of students in science, technology, engineering and mathematics (STEM) subjects declined in the 1990s. While uptake has risen over the last few years, these degrees carry the highest cost burdens in fees.

A massive wave of student protests between 2011-2013 – dubbed the “Chilean Winter” — tried to end the existence of for-profit higher education institutions as poorer families are unable to afford to send their kids to university.

The OECD shows that the average household income in Chile is only $17,773 (£11,718) meaning that domestically families have to financially cripple themselves for tuition fees. 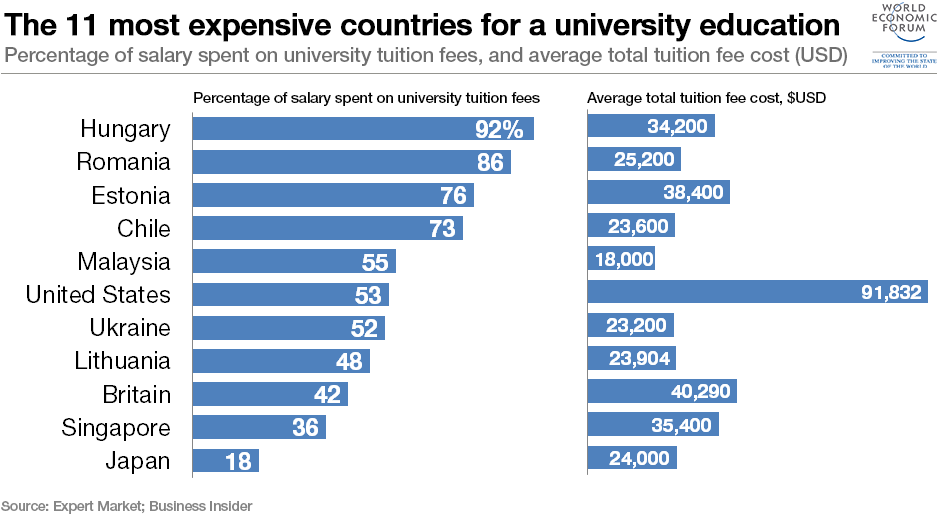 The country has around 20 universities and fees are competitive compared to the rest of the world. However, domestically, the average wage is still only RM 2,052 (£310, $470) per month. This means without scholarships or loans, parents will lose over half their wages in tuition fees.

The US is famous for its eye-wateringly high tuition fees. While that figure above is the average cost for a bachelor’s degree in the States, tuition fees from the country’s (and the world’s) most prestigious universities can be around $45,278 (£29,834).

“Many of the most expensive places are in the top ten because their wages are low so even a small amount of fees takes a lot from the average income,” said Jared Keleher of Expert Market.

“However, what you see with the UK and the US is fairly generous wages when compared with other nations, but whopping fees which reach tens of thousands per year. To compound this, what seems to be happening now is that fees continue to rise each year but wages do not, so higher education is becoming something which only the elite can afford.”

At one point, Ukraine had more universities than Italy, France, Germany, Poland and Belgium combined. The country pared down its 900 universities to just under 200 over the last three years. A number of these have specialised military institutes within the university so graduates can immediately go into the army.

Back in 2009, students protested across the capital of Vilnius against educational reforms because they thought that it would increase the cost of going to university. It ended up being true as students’ parents hive off nearly half of their salaries to pay for higher education.

Britain’s university fees are so high that they account for nearly half the average household’s earnings. However, it is still only ninth on the list due to the country’s higher wages. Tuition fees in Britain can cost up to £9,000 ($13,654) a year depending on the subject and university.

The island nation of Singapore only has five public universities and fees for medical and science-based subjects are naturally very high. However, Singapore is the third richest country in the world and high income levels mean parents spend just over a third of their salaries on making sure their children get at least a bachelor’s degree.

Japan has 500 colleges and universities across the country, which keeps tuition fees lower than other countries. However, higher education in Japan concentrates on science, maths, and engineering discipline, meaning that many humanities students go abroad to study.

This article is published in collaboration with Business Insider, and was also originally published by Expert Market. Publication does not imply endorsement of views by the World Economic Forum.

Image: A student reads under the afternoon sun. REUTERS/Mike Segar.

Our children are growing up with AI. Here's what you need to know

Younger generations are growing up interacting with artificial intelligence (AI) algorithms, yet little attention is paid to the impact of AI on children.

These 3 charts show the global growth in online learning

As technology redraws the world we live and work in, online learning offers a way for people around the world to reskill and access new opportunities.