What are fund managers most afraid of?

China has spent most of this year at the top of the list of worries for fund managers this year.

Its 7% growth target is in jeopardy, stocks have crashed from May highs and imports are tanking.

But, according to Bank of America Merrill Lynch’s monthly fund survey, fewer people are worried about the chance of a recession plunging China into negative growth.

So-called China tail risk, which is the risk of something unexpectedly bad happening, has fallen from 54% to 39% between September and October.

While a Chinese recession is still top of the fear list, it’s the biggest faller of the lot.

With Russia’s military involvement in Syria, the risk of a geopolitical crisis has increased, according to the survey of more than 250 fund managers compiled by BAML’s Michael Hartnett.

The chance of a debt crisis in emerging markets has also edged up, with a strong dollar making foreign debts harder to pay back for leveraged companies. 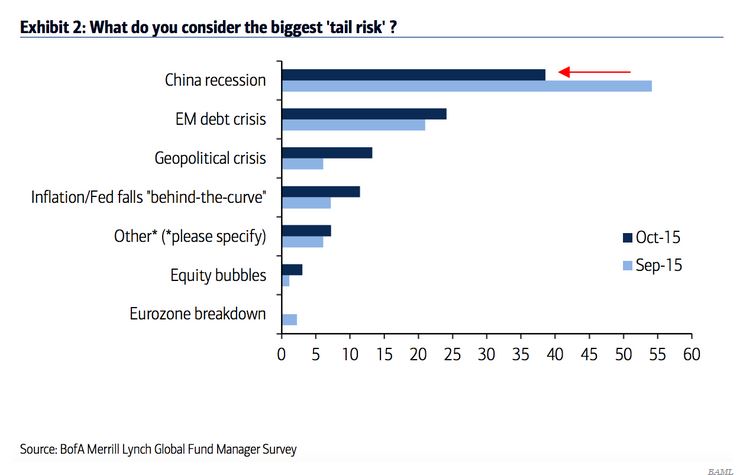 China is trying to rebalance its economy away from pure manufacturing to a domestic-demand led mix of activities. And it’s working according to a note from Goldman Sachs analysing the demand for things like petrol and coffee.

While there’s a bit more optimism over China, the same can’t be said for the world economy as a whole. Fund managers are at their most pessimistic since 2012:

The demand for overseas wealth management products in China is growing but restrictions make moving money difficult. Will a new initiative be the answer?

These are the world's biggest e-commerce markets