What are the causes and consequences of low interest rates?

The past two decades have witnessed an extraordinary decline in both short- and long-term interest rates in the leading advanced economies, from levels of around 4-6% in the 1990s to close to zero today. Although recent falls came after the Global Crisis and subsequent recession, the decline in yields, particularly for longer-term rates, began much earlier.

It may be tempting to link this fall in yields to the actions of central banks, but this would be to confuse cause and effect. Lower yields have been associated primarily with lower real interest rates, rather than a decline in inflation expectations, while the decline in policy rates reflected the fact that maintaining stable inflation with output at potential required ever lower short and long-term real rates. In other words, the ‘neutral’ real rate of interest had fallen.

This downward trend in the underlying world real interest rate had attracted the attention of policymakers even before the Crisis, with Fed Chairman Alan Greenspan describing it as a “conundrum”, while Fed Chairman-to-be Ben Bernanke subsequently attributed it to a “savings glut”, most notably in China (Bernanke 2005). Other authors, such as Larry Summers (2014), have focused on the other side of the market for loanable funds, suggesting that a decline in the propensity to invest is to blame, linking it also to the slowdown in output growth. A VoxEU eBook last year brought together several contributions on this theme (Teulings and Baldwin 2014).

Causes of the low rates

In this year’s Geneva Report on the World Economy, Christian Broda, Taka Ito, Randy Kroszner and I reassess the possible factors behind this decline in global real interest rates and consider whether the low rate environment is likely to persist (Bean et al. 2015). We then go on to discuss some of the consequences should it do so. It can be downloaded here:

Our discussion of the evidence therefore relies more on whether the timing of movements in the underlying drivers fits with the decline in rates. This leads us to conclude that demographic developments are likely to have been an important factor increasing the propensity to save, not just in China but more generally. In particular, aggregate saving should reflect the relative sizes of the population shares of the middle-aged, who are in their peak earnings years and so saving for their retirement, and those who are retired, who will instead be running down their savings. We note that the period of falling interest rates has coincided with a period when the population share of the high-saving middle-aged (40-65 years) has been rising relative to that of the population aged over 65 (and especially so in China) (see Figure 1).

Figure 1. Past and projected population shares 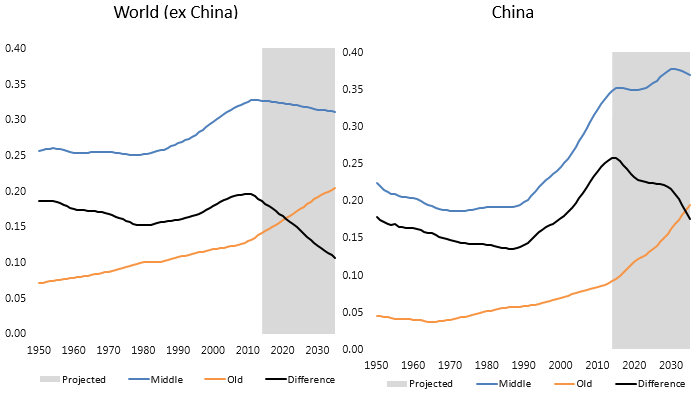 This is unlikely to have been the only factor at work, however. The partial integration of China into global financial markets and the associated capital outflows will also have placed downward pressure on real interest rates for much of the period, though less so recently. While we find the idea that there has been a long-term decline in profitable investment opportunities – and thus in the demand for funds to invest – less persuasive, a lower propensity to invest in the wake of the Global Crisis as a result of heightened risk aversion is likely to have played some role in recent years. Finally, shifts in the preferences of investors towards safe bonds and away from riskier assets, such as equities, also appear to have reinforced the downward pressure on safe interest rates, though here the evidence is somewhat ambiguous.

While the downward trend in rates has been pretty remorseless since the late 1990s, it would be unwise simply to assume that the trend will be maintained. Indeed in many countries, nominal interest rates are already close to their lower bound – in some cases, they are already mildly negative – so further material falls could only come about through higher inflation. But more importantly, some of the forces that have driven real interest rates down are, with time, likely to go into reverse.

In particular, aggregate savings propensities should fall back as the bulge of high-saving middle-aged households moves through into retirement and starts to dissave. Indeed this process has already begun (see Figure 1). And though Chinese financial integration still has some way to run, the net flow of Chinese savings into global financial markets has already started to ebb as the pattern of Chinese growth rotates towards domestic demand rather than net exports. Finally, the shifts in portfolio preferences should, at least partially, unwind as investor confidence returns. But crucially, the time scale over which such a rebound in real interest rates will be manifest is highly uncertain and will be influenced by longer-term fiscal and structural policy choices.

Although we conclude that there are good reasons to expect real interest rates in due course to recover from their present unusually low levels, it is possible that the present environment will persist for some considerable time yet. So long as it does, there are two particular consequences that will complicate the task of central banks.

The Geneva Report includes a case study of Japan, whose experience illustrates how easy it is in such circumstances to slip into a deflationary trap – and how difficult it can be to escape it. Reaching that policy-rate lower bound requires the deployment of unconventional monetary policies instead, but the effectiveness of such policies is likely to be subject to diminishing returns. Although there are several ways to alleviate the lower bound constraint and restore the scope for the use of conventional interest rate policy – including raising inflation targets – each also carries significant drawbacks.

While prudential policies should be the first line of defence against such financial stability risks, their efficacy is by no means assured. In that case, monetary policy may need to come into play as a last line of defence. The bottom line is that the risk-return trade-off facing monetary policymakers will be somewhat less favourable so long as the low real interest rate environment persists.

The pace at which underlying real interest rates yields recover will, however, be influenced by longer-term fiscal and structural policies. In particular, policies that encourage later retirement can lower the aggregate propensity to save, as will – for some countries – better household safety nets that reduce the need for self-insurance. By the same token, establishing and maintaining a stable and business-friendly fiscal and legal framework can encourage greater investment. Such policies are not only desirable in their own right but would also help to foster an earlier recovery in the underlying, or neutral, real interest rate and reduce the risks associated with a perpetuation of the current low-rate environment.

Author: Sir Charles Bean is a professor of economics at the London School of Economics.

Image: A man walks past buildings at A central business district. REUTERS/Nicky Loh.

The need to mainstream bitcoin and regulate cryptocurrency markets is likely to accelerate research into reducing the cost of storing renewable energy.

Here's how companies can make sure they are blockchain-ready