Why gender and income inequality are linked

Despite progress, wide gaps between women and men’s economic empowerment and opportunity remain, which policymakers need to tackle urgently. In most countries, more men than women work, and they get paid more for similar work. Also, there are considerable gender gaps in access to education, health and finance in a number of countries. There is mounting evidence that the lack of gender equity imposes large economic costs as it hampers productivity and weighs on growth.

Our new study analyzes the links between these two phenomena—inequality of income and that of gender.  We find that gender inequality is strongly associated with income inequality across time and countries of all income groups.

Gender and income inequality are linked

There are at least three reasons why higher gender inequality is associated with higher income inequality: 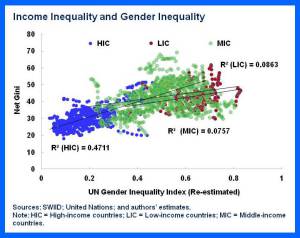 Our study finds that gender inequality is strongly associated with income inequality across time and countries of all income groups, even after controlling for the standard drivers of income inequality, which include financial openness and deepening, technological progress and labor market institutions. We study the association between the two phenomena for almost 140 countries over the last two decades. Our study extends the United Nation’s Gender Inequality Index, which captures both gender inequality in outcomes (labor force participation gap and share of female seats in parliament) as well as gender inequality in opportunity (education gaps, maternal mortality, and adolescent fertility).

The evidence suggests that greater gender equity and increasing female economic participation are associated with higher growth, more favorable development outcomes, and lower income inequality. Given these strong associations, aspiring to equality of opportunities and removing legal and other obstacles that prevent women from reaching their full economic participation becomes an issue of macroeconomic relevance, on top of the strong human rights argument: A more level playing field would give women the option to become economically active should they so choose.  This in turn would have beneficial macroeconomic effects.

A significant decrease in gender gaps will require work along many dimensions.  The policy recommendations have been discussed in previous IMF work on gender and include:

Redistribution is complementary to these gender-based policies

Nothing can substitute for gender-specific policies geared to reducing gender and income inequality. Previous IMF work has shown that redistribution generally has a benign effect on growth, while lowering lower income inequality. However, in order to combat deeper inequality of opportunities, such as unequal access to the labor force, health, education and financial access between men and women, policy markers should focus on more targeted policy interventions.

Author: Sonali Jain-Chandra is a Deputy Division Chief in the IMF’s Asia and Pacific Department.  Kalpana Kochhar is currently a Deputy Director in the Strategy, Policy and Review Department of the IMF. Monique Newiak is an Economist in the Regional Studies Division of the IMF’s African Department.