5 charts that show global warming is off the scale

Not convinced global warming is speeding up? Take a look at these two charts from NASA and the Japan Meteorological Agency. According to their datasets, October 2015 was the hottest month since global records began.

This NASA chart illustrates how far the world’s surface temperatures have risen above the median rate over the past 135 years. 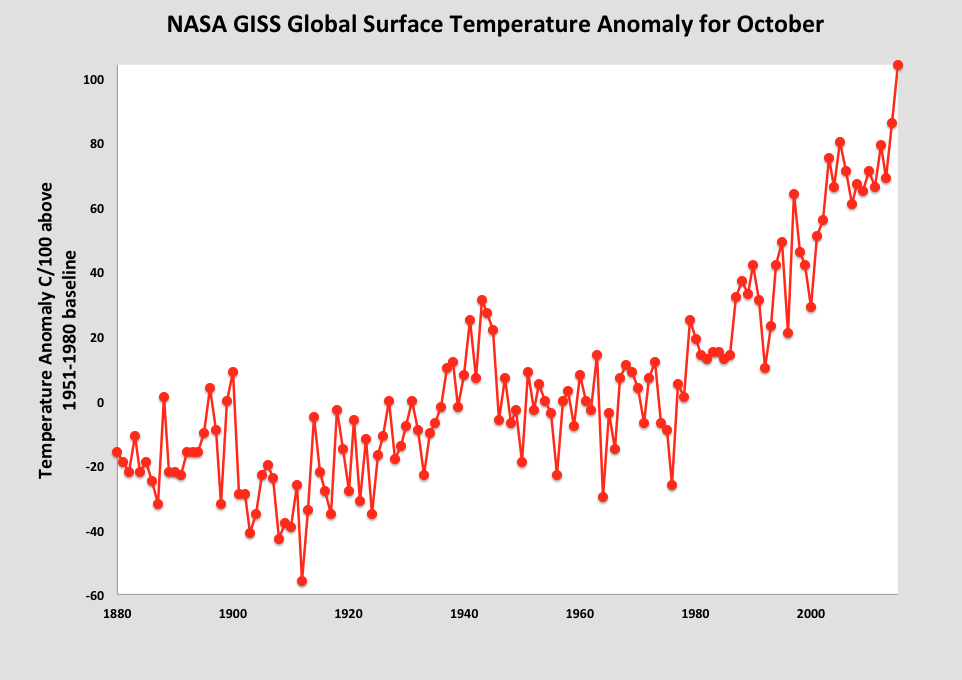 That’s not all. According to the Japan Meteorological Agency, in October the anomaly of the global average surface temperature (how far near-surface air temperatures have deviated from the norm) was 0.53 degrees Celsius above the 1981-2010 average – making it the warmest month since 1891. 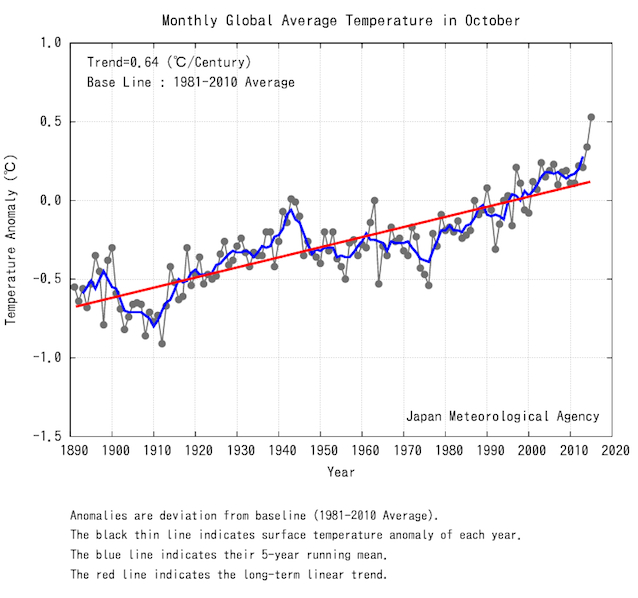 So what’s driving up the heat? Well we are. Concentrations of man-made carbon dioxide, a major cause of global warming, have been increasing steadily since we become industrialized in the late 18th century. Scientists now warn that we are reaching the point of no return and will soon be unable to do anything to reverse climate change. This chart shows how levels of carbon dioxide have risen since 1751. Adding to man-made global warming is El Niño. The weather pattern known for causing droughts and floods is gaining strength in the Pacific Ocean and could be the biggest one ever, according to reports. Already dubbed the “monster” El Niño, it could even surpass previous cycles in 1997 and 1982 – both of them classed as “super” El Niño. 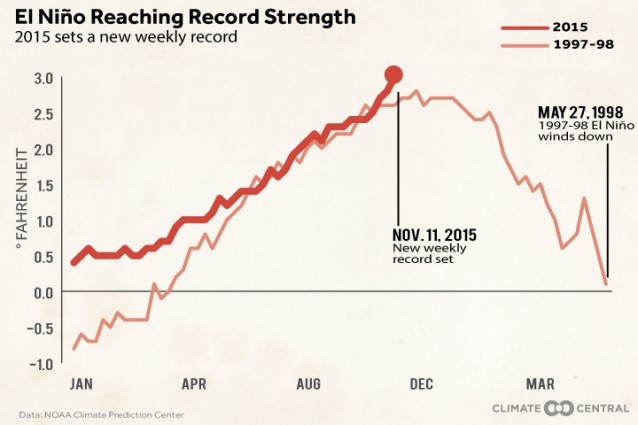 Scientists are basing their predictions on the temperature of the Niño 3.4 region in the Pacific. The heat in this region is roughly four months ahead of global temperatures, as a 2010 NASA study explains, meaning that the world won’t really start feeling the heat until next year.

This final chart, based on data from NASA, shows the relative heat of the year 2015 (in bold, orange) compared with that of previous years. As industrial pollution and the Monster El Niño join forces, it looks like 2016 could be even hotter.

Image: An aerial view of the cracked ground of the Atibainha dam, part of the Cantareira reservoir, is seen during a drought in Nazare Paulista, Sao Paulo state February 12, 2015. REUTERS/Paulo Whitaker

Four infographics to help you understand the state of the planet

Rethinking how we live, how we eat and how we travel could reduce our impact on the planet - and understanding the data can help us make smart decisions.

The country is providing ‘bed and breakfast’ for bees in the form of insect hotels, roadside wildflower verges and more. A recent survey suggests it might be working.

3 steps to help manage the complex risks of climate change

Can this billion-dollar initiative save the world’s tropical forests?

Our homes are full of harmful microplastics. Here's how to minimize the risk