5 maps on the state of global inequality

Half of the world’s wealth is now owned by the top 1%, according to a recent Credit Suisse report.

The extent of global inequality represents a challenge to societies across the world, as governments and international organisations look to encourage inclusive and sustainable growth. The World Bank estimates inequality in countries around the world using the GINI index – a measurement of the extent to which income deviates from a perfectly equal distribution. On the scale, 0 represents perfect equality and 100 would represent total inequality. The following chart shows 2013, or nearest year, data.

If we consider the Americas we see the lowest levels of inequality in Canada, with a GINI score of 33.68 – even this places it some way down the global list. For comparison, the USA scores 41.06 – placing it between Madagascar and Russia on the list. In South America, much of the continent returns high GINI scores, including scores in excess of 50 for Brazil, Colombia and Chile. Eastern Europe and Scandinavia return low scores for GINI, with the Ukraine, Norway and Finland all among the top performing countries around the world. The general picture for Europe, especially when compared to the rest of the world, is overall lower levels of inequality, as well as fairly consistent levels across the continent. 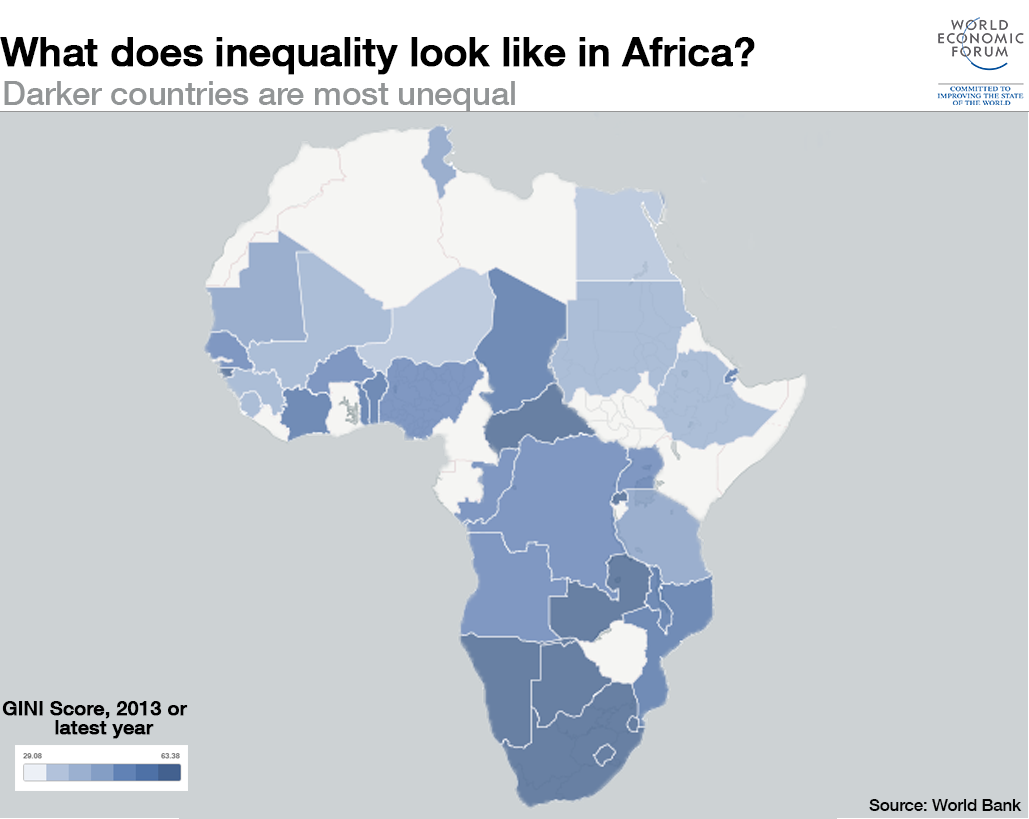 There is a lack of data for Africa, compared to the rest of the world, but the map presents a picture of relatively high inequality. Three African nations return scores in excess of 60. However, some nations return relatively low scores, for example Niger and Ethiopia.

The situation in Asia is diverse, with some countries experiencing relatively high inequality, while others have much lower levels. Kyrgyzstan has a GINI score of 27.4, while at the other end of the scale the Philippines has a score in excess of 40.

Image: A general view of the low-income neighborhood known as Boca la Caja next to the business district in Panama City, September 17, 2013. REUTERS/Carlos Jasso