Do tax evaders really blow the whistle on themselves?

Since 2009, more than 54,000 US taxpayers have come forward and voluntarily disclosed taxes they had evaded with the help of offshore accounts. The US tax authorities have collected more than $8 billion from this initiative (IRS 2015). Many governments offer voluntary disclosure programmes for tax evaders similar to this US programme. In some countries (e.g. Austria, Canada, Norway and Sweden), tax evaders who come forward voluntarily do not pay any penalty, while in others (such as the US) the penalties are substantial, but nevertheless far lower than they would have been if the tax authorities had detected the evasion.

Many of these programmes are aimed at tax evasion via offshore tax havens. Households worldwide hold about 8% of their wealth in tax havens (Zucman 2013). Given many countries’ difficult fiscal situations in the wake of the Global Crisis, many governments have increased their efforts to tax this offshore wealth. One of the main policy measures to do so is through voluntary disclosure programmes.

Voluntary disclosure programmes promise to increase tax revenues by inducing tax evaders to come forward voluntarily. In addition, these programmes also offer a way out for people who genuinely forgot to include foreign accounts in their tax returns. On the other hand, many worry about the fairness of letting tax evaders go unpunished just because they decided to come clean in the face of rising detection probabilities. A second worry is that the lenient treatment encourages tax evasion.

Thus it is an important moral question whether a state should treat tax evaders who disclose voluntarily more favourably – while one may object to the lenient treatment of people who profited for years from paying less tax, tax evasion is also one of the few crimes where the damage can be corrected retroactively (by repaying the evaded tax plus interest). These moral considerations notwithstanding, it is clearly a minimum requirement that the voluntary disclosure programme increases tax revenues, despite potentially higher evasion. This column aims to answer whether this is the case.

Is the fear that voluntary disclosure programmes increase tax evasion realistic? The answer to this question depends on the reason why people decide to voluntarily disclose. Someone who rationally decided to evade taxes will not change his mind, unless circumstances have changed. For example, tax evasion may have become less acceptable socially, leading to a bad conscience; or detection probabilities may have increased.

There is evidence that perceived detection probabilities play a large role. In early 2010, Germany acquired whistleblower data from a tax haven bank employee. The number of voluntary disclosures shot up right after this acquisition (see Figure 1). It dramatically increased the perceived detection probability, inducing individuals to come forward and disclose the tax evasion they committed earlier. 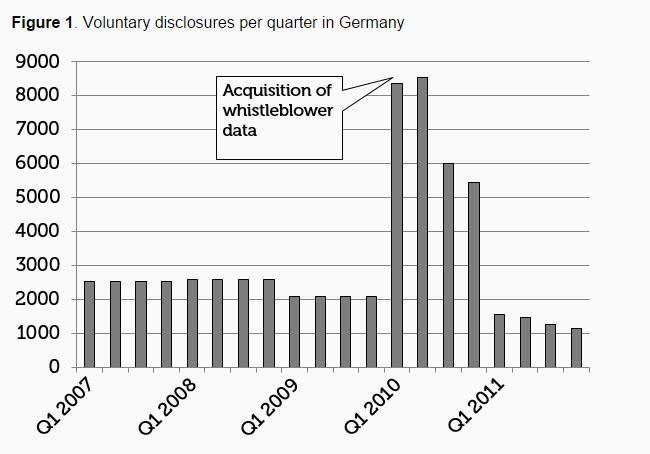 A survey of German tax authorities confirms the importance of administrative costs.

A strong majority of German tax offices state that administrative costs are significantly lower after a voluntary disclosure. When asked to quantify by how much working time decreases, the answers range from 30% to 90%, with two-thirds citing a decrease in work time above 80%.

The topic of voluntary disclosures is especially relevant today, as the detection probability for tax evasion has gone up (for example, due to whistleblowers or better information exchange with tax havens). In this environment, a voluntary disclosure programme is attractive, as it can increase tax revenues without overburdening the tax administration.

When governments expect further increases in the detection probability, they should consider increasing the fines after a voluntary disclosure. Despite its negative effect on tax evasion, it is a good idea to offer voluntary disclosure – at least as long as the main objective is to maximise tax revenues net of administrative cost.

Author: Dominika Langenmayr is Professor of Economics and Public Finance at the Catholic University Eichstätt-Ingolstadt, Germany, and an affiliate of CESifo.

Image: A worker arrives at his office. REUTERS/Eddie Keogh.

The private sector is facing unprecedented difficulties in accessing finance at a time when it is sorely needed. Could impact finance provide the answer?

Global fiscal support during the COVID pandemic, in one chart

Global fiscal support in response to the coronavirus pandemic is now around $9 trillion, according to the IMF - $1 trillion more than April estimates.

Doubting debt suspension: Colombia's former finance minister on why suspending repayments could be a mistake

COVID-19 underlines the importance of fintech in emerging markets