How is politics affected by financial crises?

The Crisis has dealt a severe blow to Europe’s political system. Rushing from one emergency summit to the next, crisis fighting has become the new normal for Europe’s political class. At the national level too, two-party systems that were stable for decades have been swept away in recent years, with new parties seeing landslide victories in elections. Mass demonstrations, strikes and political turmoil make daily headlines.

With the catastrophe of the 1930s in mind, the fear of ongoing political radicalisation in the wake of economic and financial disasters looms large in the public discourse. What does history have to say about the political after-effects of financial crises in modern democracies? Can we, over the long run of modern history, identify systematic shifts in the political landscape after financial crises?

We are not the first to ask such questions. De Bromhead et al (2012) show how the Great Depression in the 1930s triggered political extremism. Using more recent data, Grüner and Brückner (2010) find that low growth is associated with more extremist voting, while Mian et al(2012) find that financial crises are followed by fractionalisation and polarisation of parliaments. Related, Bloom et al (2011) demonstrate that policy uncertainty is particularly high after financial crises.

In a new paper (Funke et al 2015), we conduct the most comprehensive historical analysis on the political fall-out of financial crises to date. We trace the political history of 20 advanced democracies back to the 1870s and construct a dataset of more than 800 elections from 1870 to 2014. We then complement this dataset with existing data on more than 100 financial crises and with historical data on street protests (demonstrations, riots, and strikes).

Our first main finding is that politics takes a hard right turn following financial crises. On average, far-right votes increase by about a third in the five years following systemic banking distress, as shown in Figure 1. This pattern is visible in the data both before and after WWII and is robust when controlling for economic conditions and different voting systems. The gains of extreme right-wing parties were particularly pronounced after the global crises of the 1920s/1930s and after 2008. However, we also find similar patterns after regional financial crises, such as the Scandinavian banking crises of the early 1990s. Moreover, we identify an important asymmetry in the political response to crises – on average, the far left did not profit equally from episodes of financial instability.

Notes: Each path shows local projections (see Jordà 2005) of the cumulative change relative to peak for years 1–5 of the Recession and recovery period. The red line refers to the average path in financial crisis recessions and the shaded region is a 90% confidence interval. The left panel covers the years 1919-2014, excluding World War II, the middle panel 1919-1938, and the right panel 1950-2014. The dependent variable is the combined vote share of all electorally successful (vote share > 0.1%) far-right political parties in the most recent general election.

The second key finding is that governing becomes more difficult after financial crises. Government majorities shrink and parliaments tend to fragment, confirming the findings of Mian et al (2012). Using the depth of our historical dataset we can show that these effects have become stronger over time. The local projections that use post-WWII data are presented in Figure 2. The figure shows that following the post-1950 financial crises, government vote shares drop, while the opposition vote share increases (upper panel). Parliaments become more fractionalised and the number of parties rises (lower panel). All this is bad news for effective governance in the post-crisis period – at a time when decisive political action may be most needed. 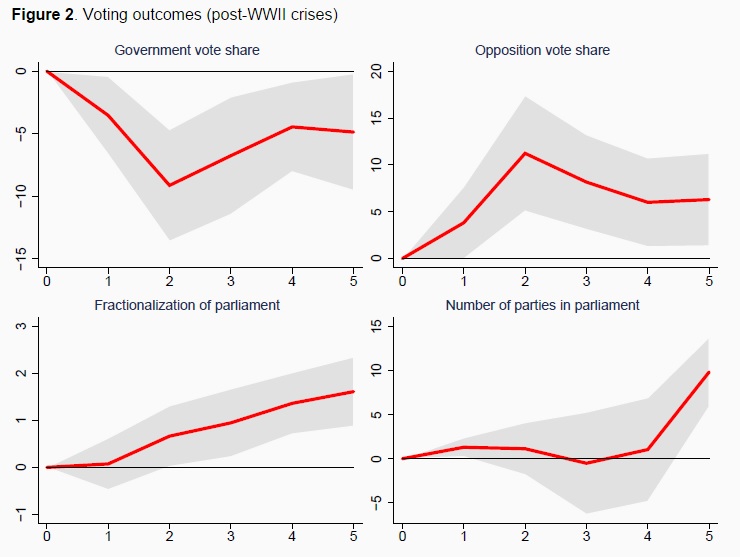 Notes: Each path shows local projections of the cumulative change in 100 times the logged variable relative to peak for years 1-5 of the recession and recovery period. The red line refers to the average path in financial crisis recessions and the shaded region is a 90% confidence interval. Post-WWII sample: 1950-2014.

People take to the streets

Financial crises do not only trigger political protest at the polls, but also in the streets. Figure 3 shows the average yearly number of general strikes (light blue columns), violent riots (white columns) and anti-government demonstrations (black columns) in the five pre-crisis years (left panel) compared to the five years post-crisis (right panel). We use the entire sample for which these data are available (1919-2013). The figure indicates a strong increase in street protests in the crisis aftermath (the grey bars show the sum of all three protest types); the average number of incidents more than doubles following financial crises. This difference is statistically significant at the 5% level. More specifically, the average number of anti-government demonstrations almost triples, violent riots double and general strikes increase by at least one third.

How persistent are these effects? We find that the first five years are critical and most effects slowly taper out afterwards. A decade after the crisis hits, most political outcome variables are no longer significantly different from the historical mean. This is true for far-right voting and also for government vote shares and the parliamentary fractionalisation measure. Only the increase in the number of parties in parliament appears to be persistent. The comforting news from our study is that the political upheaval in the wake of financial crises is mostly temporary.

The typical political reaction to financial crises is as follows: votes for far-right parties increase strongly, government majorities shrink, the fractionalisation of parliaments rises and the overall number of parties represented in parliament jumps. These developments likely hinder crisis resolution and contribute to political gridlock. The resulting policy uncertainty may contribute to the much-debated slow economic recoveries from financial crises.

In the light of modern history, political radicalisation, declining government majorities and increasing street protests appear to be the hallmark of financial crises. As a consequence, regulators and central bankers carry a big responsibility for political stability when overseeing financial markets. Preventing financial crises also means reducing the probability of a political disaster.

Mian, A, A Sufi, and F Trebbi (2012) “Political constraints in the aftermath of financial crises”, VoxEU.org, 21 February.

Author: Manuel Funke is a Doctoral Candidate in Economics and Social Science at the Graduate School of North American Studies, John F. Kennedy Institute for North American Studies at the Free University Berlin. Moritz Schularick is Professor of Economics at the University of Bonn and a Research Fellow of the Centre for Economic Policy Research. Christoph Trebesch is an Assistant Professor of Economics at the University of Munich and a Research Affiliate of CEPR, CESifo and the Kiel Institute for the World Economy.

Have we fulfilled the promise of International Workers’ Day?